Master of Puppies: A Pavlov's Dog Board Game Review 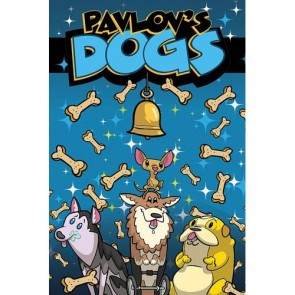 Master of Puppies is pulling your leash, ringing the bells and dispensing the treats.

Wade: “Hi, I was told to report here...”
Shadowy Figure: “Don't be Shy. You are going to be here awhile, call it what it is.” *Gestures Around at the fire and brimstone* “Welcome to Hell. So, what is your name?”
Wade: “Wade”
Demon: “Twitter Account?”
Wade: “Excuse Me?”
Demon: “Oh, you honestly thought there wasn't going to be any accountability for Social Media?”
Wade: “Ummm... @rapierdwit ?!”
* Demon Raises an eybrow *
Wade: “Wade...rhymes with blade...rapier is a type of Blade...Rapier wit...”
* Demon Mumbles * “Hubris AND puns...and you wonder why you are here.” *Louder * “Occupation?”
Wade: “Boardgame reviewer.”
* Demon's Eyes light up (well, more than the usual embers) * “Board Game? Is that one or two words?”
Wade: “Sorry?”
Demon: “Nothing, nothing, just a little hellish humor. Well, no time like the present to begin your everlasting torment.” *Hands over Pavlov's Dogs game Box* “We'll need you to write a review of this.”
Wade: “Awwww! It has cute little puppies on it! *Opens Box and flips through manual* “Look, all the little doggies are named after famous psychologist! Well, except that Immanuel Kant wasn't a psychologist, he was a philosopher...and a real piss ant from what I hear.”
* Demon gives Wade a stern gaze and emits interrupting cough *
Wade: “So...What type of game is it?”
An Evil grin appears on the demon's face “It is a game that involves math...”
Wade: “Oh God...”
Demon: “Language, sir.”
Wade: “Sorry...”
Demon: “...It is a game that involves math and memory..”
Wade: “Bloody Hell.”
Demon: “Much better, sir. Now you are catching on.”

How I spent my Eternal Damnation
By Wade Monnig

If you were putting together a game that involved things that I dislike it would be Math and Memorizing....which is exactly what Pavlov's Dogs is. Toss in a required “Moderator/DM/Dogtor” and my hopes for enjoying this game were pretty grim.

And what hell-spawned review would be complete without some detailed rules explanations?
Each of the cards in the “Test” Deck contain three bits of information (Command/Color/Number). For example, one might be “Beg, Brown, Two”. Five cards are dealt face down to each player. The Dogtor (the judge, which changes every round) picks a rule and begins the test. The starting player flips the top card of their hand face up into the center of the table and announces the total value of the test. If they play “Beg, Brown, Two” they would say “Two”. The Dogtor would then declares "Good Dog", and play passes to the next player. If the next player played a “Beg Yellow Three” they would announce “Five” to get their respective pat on the head and rousing “Who's a good boy?!” And that is how the math portion of the game works. And I guess I'm okay with math as long as the alphabet (algebra) doesn't get involved. 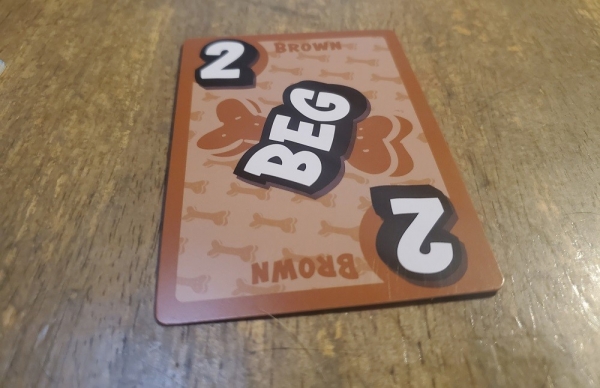 Of course, it wouldn't be a rules explanation (or much of a game) without the on-going rules that are added each round. So, if the rule that was added in the first round is that whenever a bell card is played the player must say “Ding!” So if the next card out was a Bell/Zero card they should say “Ding! Five” The card flipping continues with the Dogtor making sure everyone is adding up and following the rule(s) appropriately, dishing out “Good Dog!” for all the successful plays. However, if a player gives an incorrect total or doesn't follow a rule, the Dogtor admonishes the player by saying “Bad Dog!” (I will also accept Bad Bitch), the successful pile is cleared, the offending player loses a bone from their starting pile of three bones, and the round continues. Since it is a cooperative game, as long as no player loses all of his bones throughout the game, you win by completing the number of rounds for the selected difficulty (Bones can be passed to other players between rounds to help any player who is running low).
Pavlov's Dogs has three levels of difficulty: Puppy (3 tests/rules) Dog (5 tests/rules) and Wolf (8 tests/rules). Wolf is listed as “Challenging” where Dog level is listed as “Normal.”As my daughter reminded me while we played this game, it is largely believed that most humans can not hold more than 7 things in active memory. Now, add in doing math (and hope like hell you aren't working on a Weird Al version of Metallica's Master of Puppets for a review).

Some rules work better than others. The ones that reverse the direction of play are usually telegraphed by all the other players looking at the person whose turn it is. The same goes with skip a player rules. But, hey, I'll take my “Gimmes” where I can get them. If I can only hold seven things in active memory and Wolf levels requires me to hold eight, we definitely need the help. And, let's be honest, seven rules in active memory at this point in my (after) life is a pipe dream. 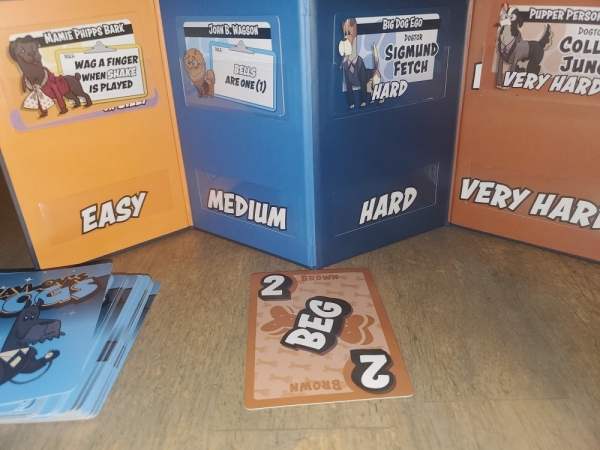 What Pavlov's Dogs did remind me of is this..err...dexterity game where you bounce a quarter off the table and into a shot glass...ummm...glass drinking receptacle. When you make three in a row, you get to make a rule that everyone must then follow, like not being allowed to say drink, drank, or drunk. Or no pointing. Okay, Okay, I admit it, it's a drinking game. These are the rules we always used, your own misspent youth house regulations may vary. Thankfully, at least that lacked a math portion.

Despite having a literal list of things that I don't like/didn't think would work (Math/Memory/Judge/Co-operative party game), I have had a surprisingly good time playing Pavlov's Dogs. I will say, despite it's short play time and party style, we never played back-to-back games because we always needed a palette cleanser/mind eraser between plays. My active memory may be crap, but somehow rules from three plays ago would creep into my mind “Am I supposed to bark for this card?”

Demon: “Wow, so you actually ended up enjoying this? Well, Good Job! Up next for review we have Machi Koro!”
Wade: * mumbles * “Jesus Wept.”
Demon: “Language.”

November 15, 2020
Rating
3.0
Pavlov's Dogs
Despite having a literal list of things that I don't like/didn't think would work (Math/Memory/Judge/Co-operative party game), I have had a surprisingly good time playing Pavlov's Dogs.
W
WadeMonnig Top 10 Reviewer 195 reviews