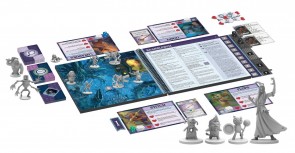 Playing Stuffed Fables has been the best of times and the worst of times. Or, not the actual worst, but just not as good as one would have hoped. So not the best either. It's been ... well, it's complicated.

Stuffed Fables is a campaign game in which a group of stuffed animals – stuffies – embark on quests to a nightmarish dreamland called The Fall in order to protect the little girl who owns them. The game looks wonderful – gorgeous! – with lovely minis and book that doubles as campaign story and game boards. It’s a cooperative game, obviously, and seems perfect for a geekdad like me to play with my kids. And it is … sort of.

The game is divided into stories and ideally you play through all the pages (game boards) of a story as an individual game. The story carries on, but you don’t save board state between stories. You can, however, save between pages in a story with relative ease even if it’s not really meant to be played that way.

Each page is a new place in The Fall – a village, a laboratory, a rickety bridge spanning a waterfall – and when we place our stuffies and the strange enemies on the map it’s always new and exciting. But then the actual game begins and it turns out it’s just more of the same. And yet, that’s not entirely fair. As you interact with certain spaces on the map, the story unfolds. You rescue a stuffed lion which then joins the party, you jump across a chasm, you help villagers put out a fire. And then, of course, you fight the evil minions of Crepitus – the evil nightmare lord of the tale. Of course, what you really do is draw different coloured dice from a bag and them use them to move, fight, and interact. But that’s not a problem – that’s what you do in a game and using dice instead of, say, a set number of actions is not an issue. (Except when it is, but we’ll get to that.) No, the problem is something else.

A page has around five different spaces you can interact with, either to draw a random encounter card or to read a story snippet that sometimes includes a task. And in the first many games I played with my eldest kids (then around 6 and 9), discussions about who got to visit those important spaces let to constant bickering. It got so bad that we abandoned the game in the middle of a story about half way through the game, never to return. But it just looks so great, so recently when their four-year-old brother asked for a long game to play, the now 8-year-old joined us to continue the story. It was much better this time, but the problem still arose from time to time. So what was wrong?

The obvious explanation is that my children are defect somehow. But we play a ton of games and this has not been the same kind of issue ever. No, the core of the problem is that you simply run out of stuff to do too quickly. Because of course they both want to visit the spaces with story – that’s the main selling point of the game. And quickly running out of stuff to do also means that each page in the game feels a bit short. In theory it’s nice because you can then advance the story and sometimes even flip between locations as you choose where to go, but in reality each page far too often feels like half a game that’s interrupted with setup and reading about what new rules are in effect.

I love the idea of a story that unfolds over pages where you for instance sneak around in a house going from a central hallway to the kitchen, back again, and then to a new room. But in effect each page feels a bit inconsequential. And in too many instances one player will be the one to do the thing that’s important while the rest don’t participate that much, and then we abruptly go to a new page. Which leads us back to the central dice system.

The core system is that on your tur, you draw five dice and then use them for actions. You can use all dice to move and to prepare a defense, but if you want to fight, solve story tasks or even move across certain parts of the game board, then you need dice of a specific colour. And even though purple dice are wild, you will far too often end up with nothing to do – because for some reason a stuffy will forget how to jump when they don’t draw a green dice.

I get the system, and I appreciate how it makes the beginning of a turn exciting. You can hope that you draw a specific colour or that you at least don’t draw the black dice that activate minions. But excitement soon turns to frustration when you discover that you can’t move because you need a green dice and can’t attack with all the red dice you’ve drawn because you can’t move into range. It’s super frustrating and happens far too often during the game. And those black dice add another  problem. Because they both activate or spawn minions and also count towards you five dice for that turn, they will not only bring your team into danger, they will also give you even less to do in preparation for it. It’s not a bad system, but it adds too much frustration and too little to the story to feel worth it.

All that being said we have a great time with the game the second time around. The 4-year-old is a bit too timid when it comes to engaging enemies, and both kids spend far too many actions looking for equipment instead of, you know, moving the story along, but it works. And for two days we spend three hours or more in single settings to finish the game. It’s a great time, and the overall story is sweet with a couple of nice twists along the way and a satisfying ending. However, I can’t quite shake the feeling that I’ve read a story to the kids (with some dice based interruptions) rather than having played an active part in making it. It’s a nice story, but it doesn’t feel like ours. But maybe that’s just me being jaded. The 4-year-old, on the other hand, started talking about playing the first part of the game (which he wasn’t part of) the moment we finished it, and he feels a very strong connection to the characters he played along the way. I know he’ll love to play again, and yet I’m hesitating a bit. It will be a good time, I know that, but I also know it will feel like a bit of a chore.

WadeMonnig replied the topic: #316649 27 Nov 2020 21:02
I agree whole-heartedly with your review. Unfortunately, even after we went back to it three or four times, it never did click with my family. I consider it one of the most disappointing games we played in 2019 because we had such high hopes for it. The start and stop of adding rules jarred us out of any sort of flow/immersion the story was creating. It simply wasn't a good time. I am glad that you, at least, made it though the entire game and at least someone enjoyed it.

mads b. replied the topic: #316656 28 Nov 2020 03:36
Starting and stopping wouldn't be so bad, I think, if each page felt like a full, short game. But because there's so little to do they mostly feel unsatisfactory on their own.

And honestly the second star is only because it looks so damn good and because especially my youngest had such a good time with it.
Read More...