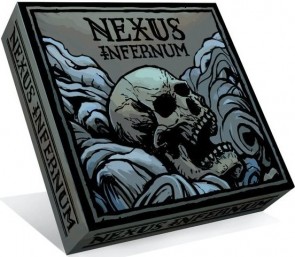 Baleful chants rise stentorian from the most tenebrous chambers of a shadowed and decrepit underworld. Skeletal minions clash desperately amidst showers of sparks - spat in arcing divinity from queer arcane gateways. Demonic pacts are forged at terrible cost with ravenous pantheons. And straddling the furnace to harness it all – necromantic sages pit their very souls against one another in the bleak environs of the pitiless breach.

A metric tonne of dice are then rolled. Much swearing ensues.

Rejoice in blasphemy as I bid you welcome to the Nexus Infernum.

“Come forth, spawn of the void! By my hand, the Breach opens unto thee!”

If you’ve followed my reviews in any capacity up to this point you may have noticed that I’m something of an unashamed theme slag. My estimations are often tilted by the frame whereby mechanics are important but the trappings are paramount. The imagination is what gilds the skeletal frameworks of these experiences, transforming dry mathematics and systems theory into stories we share and remember. Otherwise we may as well be doing Sudoku.

Nexus Infernum, the second release from the occult infused purveyors of ludic grimness Archon Games has heaps of cool skulls and shit. It’s possibly the apogee example of how an artfully applied theme can turn what is ostensibly an abstract exercise into a memorable and evocative gaming experience, infusing proceedings with an emergent narrative that envelops and transforms the act of play.

Area control, resource management, set collection and dice upon dice rolled thrice are the primary pillars that support this most gothic of cathedrals. But it’s the stained glass frescoes that most elegantly catch the light.

Two to five players will inhabit the tattered robes of budding necromancers in an attempt to harness the flow of dark arcana issuing forth from the six terrible portals that comprise the playspace of the Nexus itself. This arcana takes the form of a quintet of coloured discs, representing dominion over a certain aspect of the infernal realms as well as aligning with and bolstering the efficacy of the players options as they emerge turn-by-turn. 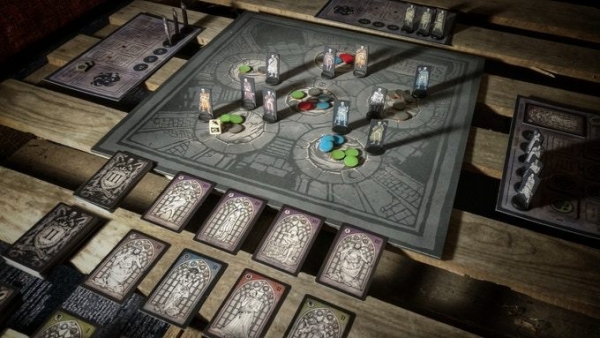 Those options in order of their appearance are Summoning, Commanding, Aggressing, Channeling, and the fraught act of Pacts. Each turn commences with players rolling a fistful of proprietary dice to determine the energies spawned from each portal. From there they will be seeking to maximise their presence on the board in order to hoover up and hoard as much arcane essence as possible. This must be achieved whilst artfully avoiding dispatch by the undead minions of their adversaries, and simultaneously plotting the Faustian bargains that will set their blasphemous star rising.

With such ragged strings you shall seek to draw down the moon and be crowned arch necromancer, reigning in glorious infamy and dominion over the realms of death itself. Cool!

“Burning lives burning, asking me for the mercy of god. Ancient cries crying, acting fast upon the way of the dog”

Equal parts strategic long-game and contingent response to swinging circumstance, players will tasked with pursuing an efficient route to consort with their favoured demons of the breach all whilst keeping a watchful eye on their opponent’s own envoys and entreaties. By predicting which demons your nemeses seek succour with, you are forearmed with the knowledge to either starve them of the currency with which to do so, or surge to forge your own agreements with the fiends, denying them a position in your opponent’s court.

Dice to summon your minions to the board, dice to determine their point of ingress, dice to resolve the clashes with your opponent’s own courtiers, dice to channel the arcane energies that power your engines.

Though a strategic affair at its blackened core, should the spectre of luck repel you then I bid you farewell at this point, for it shrouds almost every element of the game- the art of necromancy proving more art than science as one tries to wrest control from chaos amidst deliberation with tricksy demons wont to deceive and syllabic screeds of summoning that sit uncomfortably upon a novice tongue. 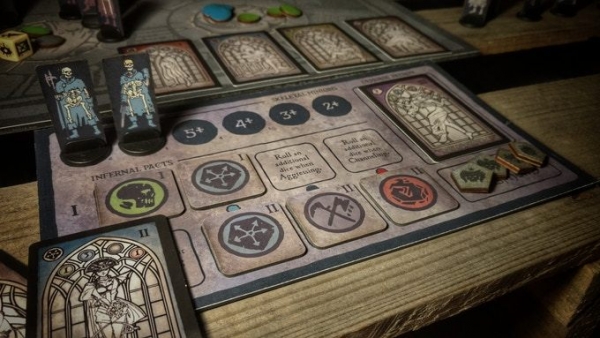 The demons of the breach you seek to flatter are divided into three Dantean layers, three tiers of power, and hence three decks from which to draw. Each are aligned to one of the four primary essences and as such will grant you a boon pertaining to their associated actions once a pact has been forged. Each requires a sacrifice in order to be called forth and thus a selection of arcana of varying hues will tempt them to your side.

Satisfy two demons of a matching suite and the bargain is struck, furthering your powers, imperilling your foes and awarding you the blasphemous tokens with which you will ultimately claim victory. Amass a lucky thirteen such trinkets and your name will be etched in the infernal tomes, immortal – as the lesser necromantic pretenders are torn screaming asunder in flayed and clotted strips, devoured alive by the wretches from the pit. Cool!

“Cain and Abel’s love and death. Love and hate is what we are. Dagger and grail are fallen off the altar”

Blasphemy can also be earned via the dire art of combat. As your minions are summoned and placed upon the board, you may seek to crowd and dispatch the underlings of the other players, bony claws and splintered steel clashing in a succession of desperate assaults played out amidst the fires of the portal mouths.

Aggression pays dividends here, for the lot of a necromancer is merciless indeed. Attacking players will roll a d6, defending players a d4. Any results of four or above will see their opponent’s bony avatar dispatched back to the player board and a crisp and minty point of blasphemy awarded to be savored – like a soiled communion wafer that burns hot to the tongue. 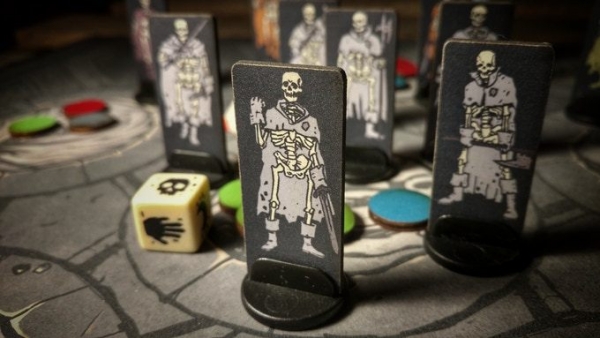 Odds can be further stacked if one of the players in question has forged a pact with an aggressor demon – lending them added points or even additional dice to their rolls.

Caution must be exercised and your approaches adapted based upon the sympathies with which your horrific harem most resonates.  Perhaps your brood will lend you their arm in summoning or commanding? Perhaps they will assist in the siphoning of essence? Choose wisely based upon both the state of the breach and the machinations of your rivals. Dice or no dice, your success will hinge precariously upon it.

“Day turns to night as I rise from my grave, black was the hole where I laid…”

And so, across a framework of colour matching and collection to accrue points, we see slathered in greasy fistfuls the black magic of theme. From its glorious premise, to the evocative artwork and flavour drenched rulebook- the scene is set in the minds eye, the imagination duly prompted and the giddy thrill of the forbidden unleashed.

Simple to learn (despite a handful of lineball ambiguities in the rules tome), yet with a depth and decision space that continues to compel, my first encounter with this box was a sinister joy. An initial duo of forays were tight one vs one affairs and it seems this is where the game shines blacklight brightest, as it gifts you the opportunity to focus entirely on the aspirations of but one antagonist – matching wits as you account for their gestures in equal accord with your own. 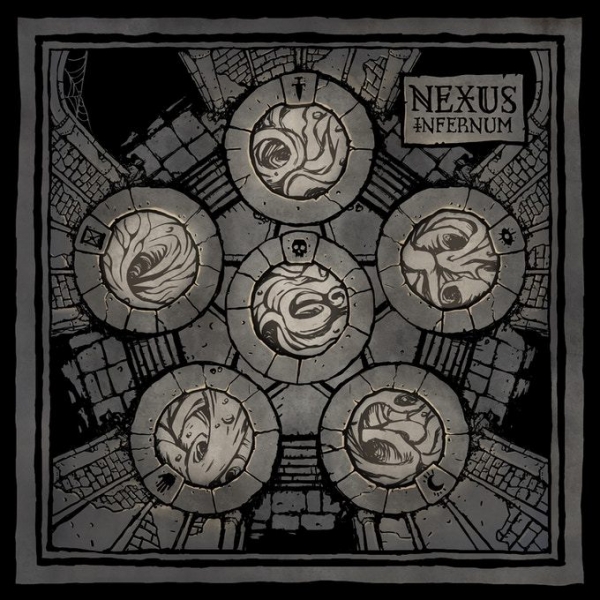 Subsequent games at three were a more chaotic affair – as arcana spilled in a riot of rainbows from portals, and potential pacts were snaffled with a frequency that stymied even the best laid plans – the state of the breach morphing wildly turn-by-turn. It also revealed the inherent snowballing effect that can upend the game’s momentum should a certain set of parameters play out, as power begets power and blasphemy accrues in a spiraling satanic crescendo.

At five it might descend into anarchy. But anarchy is cool. Your mileage may vary.

At a tight 45-60 minutes it refuses to outstay its welcome regardless. Set up is brisk, and so return voyages to the breach are likely to be posited, that grudges might be settled, or dominion rendered absolute. Our sessions flew by in a blur of dice and damnation, sound-tracked by Sodom and Celtic Frost. It was a good fit.

“Blasphemer. Rites of death. Return to Hell. I am Satan’s child, attack you with this Spell”

And that may well be the deciding factor whether or not delving into this particular Crypt of Rays is a trip you want to take. A pact you wish to make.

If you read this and went ‘Fuck yeah skulls and shit. Blasphemy! Hail Satan! Guitar Solo! then absolutely get this game. If you can get on board with how goofy and fun all this Satan shit is and you dig tactical PvP seasoned heavily with luck and a reasonably robust decision space in both the short and long-term game then this will also brand you pleasingly. A bastard union of European abstraction and the thrashiest of thrash, it straddles worlds like a leprous boatman, beckoning.

In the end, it’s only your soul at stake.

So mote it be. 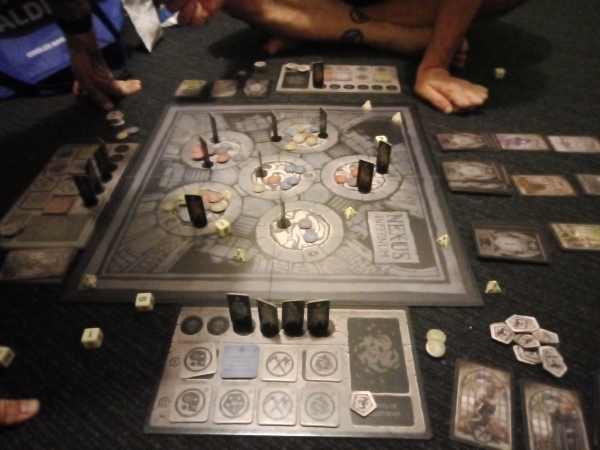 Shellhead wrote: I love the visual design of this game, but I'm not sure if I would enjoy the actual gameplay.

Whilst it's neither revolutionary nor particularly deep, it is a lot of fun and crucially- there are interesting decisions to make on each turn. Engaging without being a brain burner. You'll need to enjoy competitive conflict though. As light as the theme is dark, it's easy to get to the floor and makes for a compelling 45 minutes-especially with two players.
The theme and presentation really does elevate the experience though. It's both adolescent and yet possesses a weird classy austerity.
Read More...