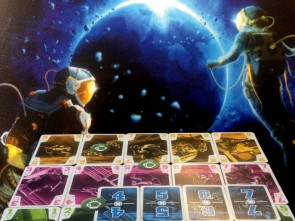 Game Name
The Crew: The Quest for Planet Nine
Publisher
Kosmos
Designer
Thomas Sing
Players
2 - 5
There Will Be Games

Space, the final frontier. We're on a 50 mission journey to find a new planet in our solar system. We have to work together to seek out new theories, new experiments and new proof. It's no trick and we have to boldly go, where no scientist has gone before. These are the adventures of The Crew by Kosmos.

Trick-taking is really a mix of several mechanisms and concepts, and it's something that's very hard to understand or teach. Trick-taking games have been around for centuries, if not longer and each trick-taking game has developed its own language, which takes years to learn and decades to master. Trick-taking games are all about subtle hints and conveying information through the cards you play. Timing can mean the difference between victory and defeat. These games may often seem to involve a large element of luck and guesswork, but when played by masters, virtually every card is played for a reason and with intent.

Trick-taking games also seem daunting and off-putting and are treated a bit like chess or modern heavy games, like 18xx or similar. People are afraid to learn them, because they don't want to spend hours learning something that they might not even like.

So for Kosmos to release a trick-taking game into the hobby is daring. Yet, The Crew has achieved something that even Skull King hasn't quite managed. It's a trick-taking game that you can learn within a couple of games, each of which will take less than half an hour. So within an hour, you will know how trick-taking works - even if it will take you a lot longer to master it.

Where Skull King assumes that you know how trick-taking works, at least in principle, The Crew assume you know nothing about it. The rules are pretty easy to follow and even if nobody in the group has even heard of trick-taking before, you will be playing a few tricks and starting to understand how it works. Play a couple of games, or missions, as they are called in The Crew, and you will all get it and start to develop strategies.

The real clincher here is, that The Crew is the only trick-taking game, at least that I know of, that is fully co-operative. So even if all of you start from nothing, you will all help each other and you will all learn together, because you all want to succeed and beat the game together. That's a really amazing achievement and is what makes it possible for you to learn trick-taking without having to watch someone else play and learn from them.

Yet, even though the game is fully co-operative, you will still learn many of the things you would learn in any other trick-taking game. You will learn about suits and trumps, you will realize that emptying your hand of a suit can be beneficial for the team and you will start to learn the language of how playing a specific card at a specific time will tell everyone else something very important.

Speaking of telling others information. The Crew is one of those co-operative games where you can't communicate, just like in The Mind. However, all of you can share one piece of information during each mission: whether a card is the only one you have of that suit, whether it's the highest or whether it's the lowest of that suit. That can be critical sometimes, but sometimes may be better conveyed by learning the language of trick-taking games and playing specific cards at a specific time.

As you can see, I'm enthralled by The Crew. Yet, there is one more thing that is amazing about the game. You can play it 2-player. Now, that is an amazing feat, because most trick-taking games require at least three players, or if you only have two, you rely on a third dummy player, which usually plays their hand randomly and which really spoils the experience.

In The Crew, there is also a dummy player, but this one actually works really well. You basically see half of their hand face-up, while the other half is face-down. That means both of you know some information, but not all of it. One of you controls the dummy player and as you play face-up cards, you then flip over the face-down card underneath it, so that you reveal more information.

So The Crew is a really clever game and even though it won't teach trick-taking everyone, it's the best game to do so that I have come across. It's great for someone who knows trick-taking and wants to teach it to others and it's just as great to learn trick-taking if none of you know anything about it.

November 25, 2020
Rating
4.5
The Crew
The Crew is a really clever game and even though it won't teach trick-taking everyone, it's the best game to do so that I have come across.
O
oliverkinne Top 50 Reviewer 47 reviews

There were some missions in the middle that seemed harder than some of the missions we're seeing now. But each adds a little more interest to what you're trying to do. All in all this has been a great use of my time.

kmj replied the topic: #317086 11 Dec 2020 13:30
Just a note that Fox in the Forest Duet (a follow-up to the popular Fox in the Forest) is also a fully cooperative trick-taking game; and it is designed solely for two players. It's a neat game!

Both are worth checking out, though The Crew is definitely amazing at 4 players. We've had a regular Monday night "The Crew" session for the past couple of months, and it really is a unique game. One thing that sets it apart from The Fox in the Forest Duet (aside from the wider player count) is that Duet uses a small board and some pieces to help track your success, while The Crew is (almost) just a deck of cards.

Funny that they both came out (or, at least, became available in my neck of the woods) at roughly the same time.

the_jake_1973 replied the topic: #317141 14 Dec 2020 08:48
I've never been a fan of rebranded/themed trick taking games since I really enjoy Hearts, Spades, and Euchre. There has been no compelling reason that drove me to the plethora of other trick taking games as those three are solid.

The Crew has been a great surprise to me. I love the mission goals for each hand and the team format. The limited communication is fantastic since you have to figure out how much information you can indicate with one card.

Will I explore more in the trick taking game realm? Likely not, the big three aren't flashy with the theme and colorful cards, but they cover what I look for in the genre. I am happy to add The Crew to that number.

Sagrilarus replied the topic: #317195 15 Dec 2020 08:13
I’ll tune in again to mention that as far as I’m concerned, this is the best cooperative game I have ever played and by a wide margin. It’s rigid in that you need four, but I have two campaigns of this going and have had hours of fun playing it. Best new game I’ve played in a few years.

Ah_Pook replied the topic: #317196 15 Dec 2020 08:31
It works anywhere from 2-5 in my experience. 4 is ideal, but I wouldn't turn down a game at any player count. 3 is solid as long as you use the 3p variant from later rulebooks. 5 can be brutally hard but it's still fine as long as you're okay with losing for to player count sometimes.

Sagrilarus replied the topic: #317469 23 Dec 2020 11:54
And to follow up just a little bit more, I'll mention that, on my second pass through, some of the missions in the teens are tougher than missions in the thirties and forties, I think because the goals are more likely to step on each other.

In the forties there's nine goals, but since you go around the table twice picking them you can group them logically and get multiples on a single pass. We had one trick pull three tasks at once.

In the teens you each get one goal, there's an ordering, and it more or less means that if two of them clash they are guaranteed to be assigned to different people.
Read More...