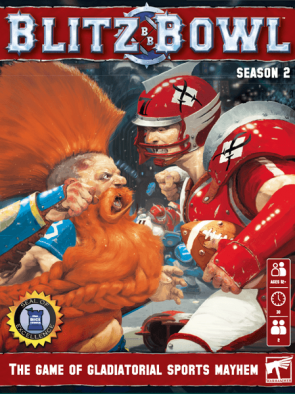 The crowd roars as the Blitz Bowl player unleashes the mother of all passes. It travels almost the entire length of the field, clearing the braziers and the admittedly low bar of the dwarf opposition. The sprinting catcher weaves in and out of defending dwarfs, making for the one gap in the line where he can squeeze into their end zone, and he leaps ...

About thirty minutes earlier, I’d had to drag a protesting teen out of her bedroom to play Blitz Bowl with me. I’d already got it out on the table, spiky figures poised to run for the ball in the middle of the cardboard pitch. We went through the basic rules. You get three actions per turn that depend on whether a player is next to an opponent. If not, you’re free to run and throw but you can only move next to an enemy model with a special, short, “mark” move. Once there you can only attack or step away.

That division is the heart of how Blitz Bowl works. It means you can defend a line of scrimmage with gaps an opponent can’t run through, only mark into. It means that to attack an enemy you often have to use all three actions: run to get close, mark to get adjacent, then attack. It means one square difference in your plans and calculations can make the difference between success and failure. And then the game passes you a curveball in the form of the Challenge deck.

These cards reward you with extra points for meeting certain objectives. In my first couple of turns, my human players use them to streak into a narrow lead. I take the first turn, and one of the cards available gives me a point for taking the ball. Another gives me two for completing a risky pass. The catcher of that throw almost makes it to the Dwarf Giant’s end zone before getting crunched in a tackle and dropping the ball.

And then everything goes wrong. 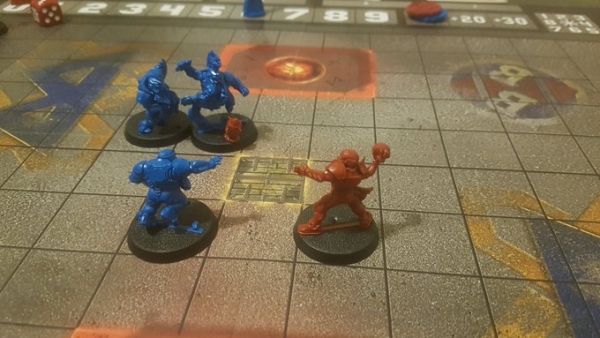 My daughter has picked up a “free” card just for being behind. But the thing is these cards aren’t only worth extra points. When you gain one, it goes into your hand and you can keep it to play the effect on the reverse. In her case, it gives her two extra actions. They let her grab the ball with her dwarf runner as he sprints down the field, and move up the crazed Trollslayer to protect him.

Trollslayers get a free attack after they mark which is very powerful. This is no eurogame, but making efficient use of actions is still critical. The Mohican-haired dwarf punches a hole in my defensive line and the runner powers though. Her Blitzer - another aggressive player, clears the way to my endzone. With lucky rolls both the attacks manage to injure my squishy players, removing them from the pitch. All at once, she’s scored a touchdown and the points are level. She’s no longer a reluctant player. She’s leaning over the board, slapping down cards, engrossed.

After that, it feels like there’s no stopping her. Getting an injured player back on the pitch takes an action and they start back at their own endzone. Except it’s my own foolishness that fails to stop her. Rather than doing that and protecting my zone, I opt to use my faster players to power down the field and pick up the new ball. In no time, she’s reversed the situation with more aggressive plays. Then I’m two touchdowns down and about to lose if she can manage to open up a ten-point lead.

That’s when I unleash my own stock of cards which allow me to attempt a long pass with ludicrous bonuses to the roll. Which is where we came in, of course. Despite the risks, the cards leave me with a two-thirds chance of making the pass. We’re hooked on the dice as it tumbles across the table and comes down with a success for me. Grabbing a risky throw card as well as my touchdown, it looks like I’m back in the game.

Success is illusory. Over the next few turns, I defend successfully but the Dwarf Giants grind out the ten-point lead they need to win on cards alone. If they hadn’t, we’d have carried on through the quarter of the deck remaining and the highest score wins. The whole game, including teaching time, took about an hour. It felt more like the thirty minutes listed on the box.

Over the next few days, we explore how these teams match up against each other. The second round is all about the dwarfs. They crunch into an immediate lead with an early touchdown, rolling block dice like little godlings. At one point two-thirds of the human team lie injured in the dugout. They start to claw their way back by eking out a living from Challenge Card points. Then, toward the close, the game goes absolutely nuts. 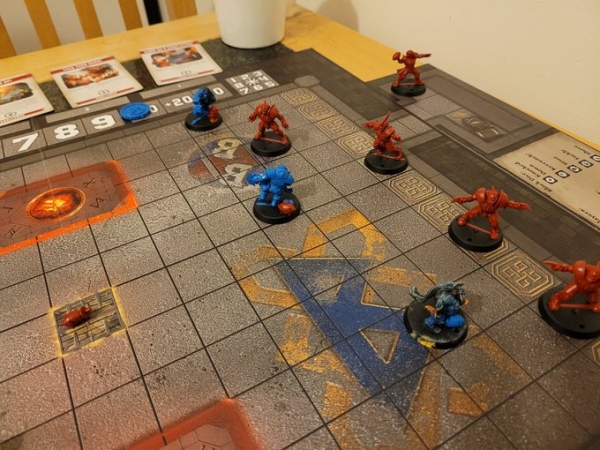 If a team with the ball can’t claim a Challenge Card on their turn, another ball gets added to the pitch. The dwarfs keep on ending up in that position and at one point there are four balls on the pitch. The extra balls are, I presume, supposed to help the weaker team but three of them go to dwarf possession. The humans defend like heroes but they can’t keep out the tide of balls forever and lose again. The dwarfs win, but it feels like the real winner was the dice.

I learn later that the extra balls rule is an addition in this second season. I decide I'm going to treat it as optional going forward. Nevertheless, that night, I start painting the figures in anticipation of this seeing a lot of table time.

By the third game, it’s clear that they can’t and aren’t supposed to go toe to toe with the heavily armoured dwarfs. They have to play more of a passing game, exploiting the slow dwarf movement. This is hard, requiring the humans to throw forward a scrimmage line to protect their Thrower and Catcher, and feels in the lap of the dice gods once more. But it is a form of structure, of strategy, however much fun it is to charge forward like mad and get the ball. It’s a closer game: there’s a lot more to explore. 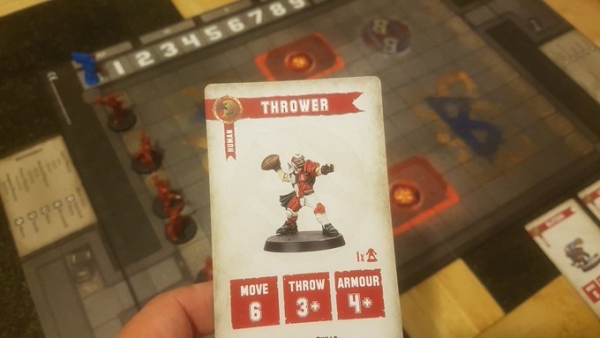 And that’s just between these two teams. There are cards for another eleven in the box, although you have to get your own figures. We flick through, laughing at the Halflings, admiring the Lizardmen in their splendid feather headdresses. At the back of the book, there are more options including extra endgame Challenge cards and specials balls. The latter is the only significant addition in this new season box. There are also basic league rules which see only your coach gaining traits, rather than players. Simple, but effective, and, given that 30-45 minute play time, a realistic goal.

I’ve played every edition of Blood Bowl, from the first with its cardboard standees and Warhammer rules, right up to the swanky new Second Season box. After it got its own dedicated rules, every version has been worthwhile, an athletic ballet of strategy and luck. But none of those versions ever felt like a sports game. They were too slow and sedate to recreate the all-consuming thrill of a last-minute dash for the line. Blitz Bowl does, reliably and in style, in less time with fewer rules. It’s not often the smaller player can win the tackle, but Blitz Bowl has the smarts to manage it.

November 29, 2020
Rating
5.0
Blitz Bowl
Often chaotic, but a core of tactics keeps everything in place to make this fast, furious game of sports strategy feel as exciting as the real thing.
MT
Matt Thrower #1 Reviewer 286 reviews

n815e replied the topic: #316692 30 Nov 2020 09:50
21 years ago I participated in a club Blood Bowl season and it is still one of the high points of my gaming life. I love the game so much, we had tremendous fun, but I moved shortly after and never found another group.

This game tempts me, but I know I won’t find the opponents to play it with.

Like others, I've been throwing gobos since the late eighties. And one of my gaming highlights was my summer of 94 Blood Bowl season (five guys, I won with the Wood Elves). Decades later, DreadBall has replaced my itch for sports board gaming. This second season of Blitz Bowl may shift the balance.

the_jake_1973 wrote: This Second Season is the way they are notating the 2nd Edition of Blitz Bowl? You don't need the first one, correct?