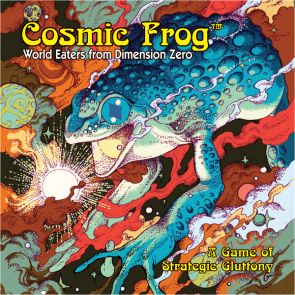 Ever since I learned about Cosmic Frog, I’ve been tweeting about it. Someone asked what the mechanics were like. To which the only, incredulous, reply is: it’s a game about two-mile tall, landscape-eating frogs and you want to talk about mechanics?  Indeed such are the thematic hooks on this one that that description makes this review superfluous. After the frogs, you’re either pressing the buy button or clicking close.

So when Cosmic Frog arrives, I am almost as excited as the gigantic, star-eating, art nouveau frog on the cover. Inside there are six chunky, hard plastic frog miniatures, a neoprene playmat and a ton of super chunky cardboard hexes. Underneath there are custom dice and a card deck emblazoned with yet more nouveau amphibians. The curving whiplash of that style is a fine complement to the sinuous batrachians and bizarre theme.

Impressed, I display my riches to my family. My wife, who doesn’t care much for games but does care a lot about art, loves the production values. My daughter loves frogs and is instantly engaged, so we set it up to play.

With two we have to control a team of two frogs each to make sure it’s crowded enough to get lots of action on the board. I was a bit worried about the setup which means sorting out a load of landscape tiles and adding them to the mat. In fact, with both of us pitching in, it’s not too bad. The worst thing is having to align the hex sides with the grid on the map.

Our goal is to eat land tiles from the map, which stack in our frog’s gullets. There’s a lot of structure around this to think about when planning strategy. Frogs can only jump in straight lines, and get slower the more they eat. We want to vomit the lands up - yes, really - in particular patterns to score points.

We approach the first couple of turns with appropriate rigour, brows furrowed, each move considered. Then, this being a conflict game, I decide to get stuck in with an attack. This is a straight dice off, one against another, but we can spend Oomph - Oomph! - to get bonuses. We also each have a secret ability card which might influence combat if we choose to reveal it.

There’s the customary thrill as the dice rattle and then I win. Sheer luck. I almost feel guilty at the fortune of it as I reach into the defeated frog’s throat and steal the lands therein. Then, the game explodes in our faces. 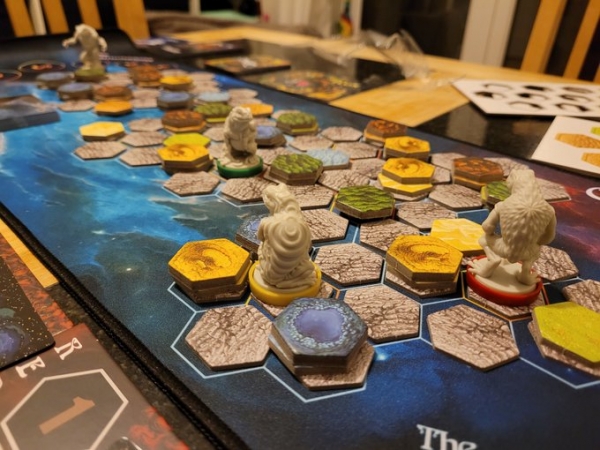 Once battle has been joined, there’s no stopping it. Frogs must move off-board to vomit lands for scoring and, off-board, there’s no adjacency. Off-board, in the aether, you can attack any other frog in the aether or one on the edge of the board. It’s a free for all. There are frogs pummelling each other and rifling through puked-up lands all over the place. I have no idea what’s going on, or whether there’s any point in trying to plan the scoring patterns any more. And I don’t care, because I’m an immortal two-mile high frog.

Adding to the chaos is the random turn order, drawn from a deck. Back to back actions, letting you get into the aether and retch tiles before some can attack you, are invaluable. I’m on tenterhooks with every draw, but it’s also very frustrating when things don’t fall out well. So I start to leverage a rule that lets frogs spend Oomph to get a bonus turn, but Oomph is precious. It protects you from attacks. It feels like juggling fireballs.

Amidst the turn order cards is one that can force a re-deal of special powers. There’s also one which causes a part of the board to shatter, also shattering frogs caught in the impact. This causes a very sudden finish to our game. Some removed hexes have an “instability” icon which stacks up to determine the game end. I start pulling lands out of my vault and counting up the points, almost in a daze. I have no idea if I’ve won. I haven’t.

What the hell did I just play?

To try and find out, I turn to the internet. Cosmic Frog divides opinion right down the middle: love it or hate it. And I can sympathise. There’s a small group of games which feature a lot of strategic levers but that can torpedo all your hard work with luck. I hate games like this, and Cosmic Frog feels like it belongs there. But what those other games don’t have is mountain-retching interdimensional amphibians.

I come up with a theory. It seems to me that amidst the freakish theme, and the risks of play, there are tendrils of mitigation that are easy to miss. You don’t have to make yourself a target. You can avoid hanging around with a gullet full of land in easy to reach places. You can count the action cards, hoard your Oomph, and maximise those back to back turns.

To test this, I try out the downloadable solo variant. This sees you playing against a team of three AI-controlled frogs. They’re hyper-aggressive, so it’s a great way to test defensive strategies. And the rattle of dice in the box lid answer my question: yes, you can defend yourself. Sometimes. It feels like an appropriate solution for a game which can pull the landscape out from underneath your best-laid plans at any time.

Being pummelled by three automated frogs leads to them punching me out of the aether and into the outer dimensions. This is a fancy name for skip-a-turn, which is a no-no in modern design. All the more so because while you're out there, others can raid precious land from your vault. But Cosmic Frog has a cosmic joke to pull on the naysayers. While you're out there, you get to store the missed turns. So I roar back onto the board in a frenzy of revenge, taking several actions in a row against the dumb frog foes.

It's not enough. I lose, again.

There have been more chances to win, since. With its rewarding strategies and punishing randomness, it's as slippery as its titular amphibians. But I'm glad that it exists because we need games like this. Without fresh, daring material, art stagnates. Without Cosmic Frog, board games would be an endless expanse of pleasing Renaissance nobles and sci-fi franchises. Those that seek to break the mould, like designer Jim Felli, often go underappreciated: but with Cosmic Frog, he’s hit the magic formula of both novelty and success.