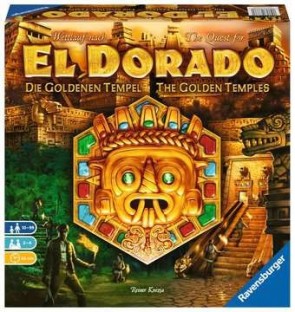 Game Name
The Quest for El Dorado: The Golden Temples
Publisher
Ravensburger
Designer
Reiner Knizia
Players
2 - 4
There Will Be Games

Confession Time: A few months back I ordered some games for pick up at the Miniature Market retail store in St. Louis. I stopped in to pick them up and, as one tends to do, I checked out the Ding and Dent section where slightly banged up versions of games get deeply discounted. Despite my mask and a full regiment of sanitizing, I was still feeling a bit of anxiety being in a store. So, I rushed around a bit but I spied a dented copy of The Quest for El Dorado for 70% off. Doing some quick math, I figured that would be roughly $15.00, I love the game and thought that it would surely be a hit with the family, so I snagged it. Upon getting home, I posted a pic of the Doctor Who expansions I had ordered and The Quest for El Dorado on Twitter (@rapierdwit) and Josh Look responded and said he would be interested to know what I thought of Golden Temples. Golden Temples? Aww, fuck. 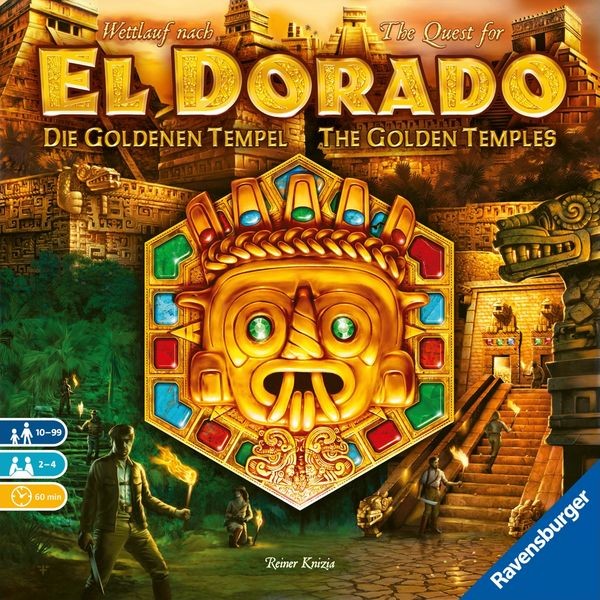 It turns out that this: 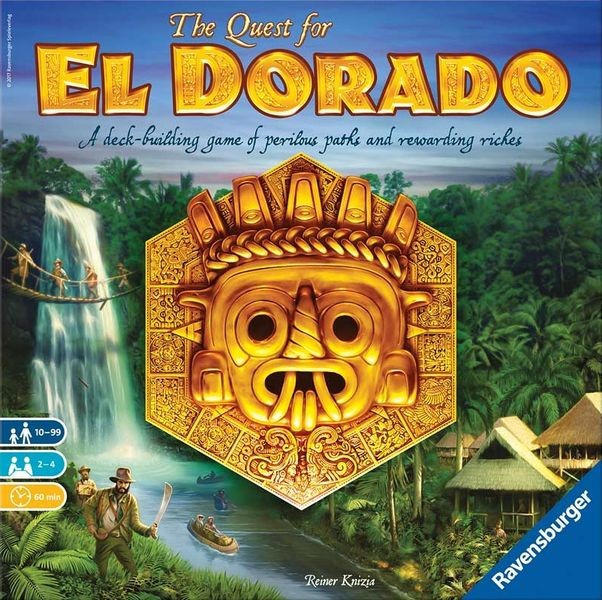 They say that a writer never stop rewriting a script. I think we can safely say that same about board game designers and the games that they create. Dr. Reiner Knizia has returned to the well for quite a few of his releases with new editions, re-imaginings and straight up sequels. The Quest for El Dorado: The Golden Temples is a stand alone sequel to The Quest for El Dorado that can be used in combination with the base game.

Everyone knows how to play The Quest for El Dorado, right? Well, Golden Temples sure expects you to. The instruction manual is sparse and explanations of some portions of the game are entirely missing. At their hearts both QED and Golden Temples are deck-building, racing games. Where QED has a definitive start and finish line, Golden Temples has you racing to three different temples to collect gems before heading to unlock the Treasure Trove at the finish line. 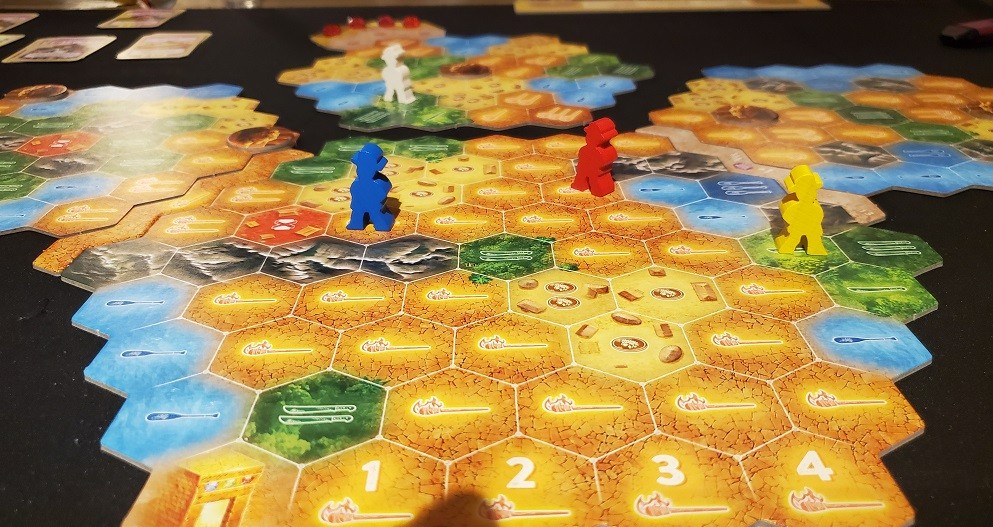 Since you are going to three separate locations, there can be much less congestion or “Blocking” in The Golden Temples than in QED (Which you will either love or hate, depending on which side of the blocking you are typically on). But what the removal of this “impediment” reveals is why it was so brilliant in the first place. When you are blocked in the original Quest for El Dorado, what were you forced to do? That's right: you would purchase a card. So, it taught you one of basics of building a deck: To add in new and better cards. And then the villages taught you other other side of deckbuilding: thinning out weaker cards.

Where QED had caves to tempt you off the beaten path, Golden Temples have the opposite in Idols/Guardians. Where one might expect these “traps” to negatively impact the player who dares to venture too close to them, once again Dr. Knizia knows human nature. Most of the penalties are actually boosts to the other players. People simply react more positively to the game giving something to everyone else instead of taking it away from themselves even though the net result is the same. Of course, the Guardian that causes you to lose Gold Coins is the exception to the rule. But, at least that makes thematic sense: Triggering a trap made you drop coins as you scurried away. How you would go about explaining how a poison dart sticking you in the neck gives all the other players an additional card, I'm not sure. 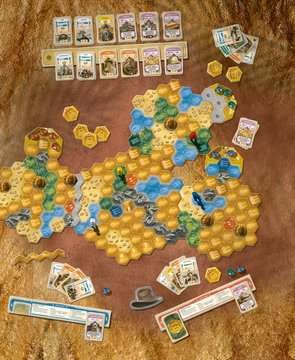 Of course, there are plenty of new cards to purchase in Golden Temples. The Jeep card is fantastic and I can just picture a player racing away from the other saying “So long, suckers!” only for them to find the jeep buried in some quicksand a few miles down the road (Which is why it makes it being a one-shot use card so thematic). Other cards like The Pilot initially made me excited. Finally, a way to transverse those pesky mountains! Alas, Mountains are still impassable but now I just wonder if the people at Ravensburger really understand how airplanes work.

The good Doctor Knizia continues to show why he is a master of creating board games by turning Negatives into Positives. During your race, you will come across blockades that must be removed before you proceed, which hinders the person in the lead. But, at the same time, the number of blockades in your possession at the end of the game is used a a tie-breaker. 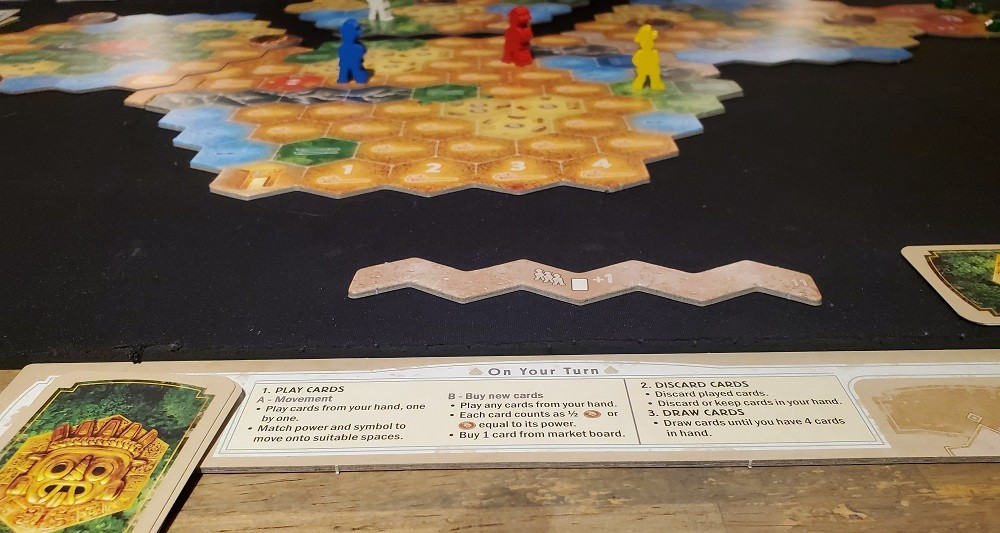 An archaeologist is just a thief with patience. - River Song

Raiders of the Lost Ark and Indiana Jones and the Last Crusade are both fantastic movies. But do you really want to watch them back to back? That is the crux of adding Golden Temples to the original Quest for El Dorado. As stand alones, both are just about the perfect length for what they are. Do you really want a double feature when you play? Because combining the two is roughly double the playing time.

There are no user reviews for this listing.
Already have an account? Log in now or Create an account
Discuss this article
Log in to comment
Posts in discussion: The Accidental Archaeologist- The Quest for El Dorado: The Golden Temples Boardgame Review

Ah_Pook replied the topic: #317592 30 Dec 2020 14:37
I love the base game + heroes and hexes, but could never tell if this was worth getting in addition. I certainly don't need the game to last twice as long. Are the additional market cards back compatible with the original game?

WadeMonnig replied the topic: #317593 30 Dec 2020 15:29
Yes (and no). You'll have to grab torch cards since this don't exist in the original when you come upon those type of spaces and those cards can be a virtually useless part of the game depending on the layout you choose when combined with the base game. So. a thin, optimized deck can backfire if you misjudge if you still need a type of card later in the game. It generally just leads to a slightly bloated deck... just in case.
Read More...