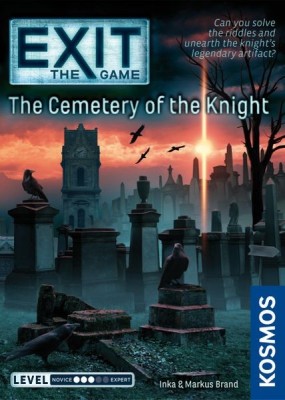 Game Name
Exit: The Cemetery of the Knight
Publisher
Kosmos
Designer
Players
1 - 4
There Will Be Games

This is a spoiler-free review. I won't be discussing any of the specific puzzles or their solutions within this review.

The first puzzle usually sets the tone for an Exit game and Cemetery of the Knight is no exception. Enthused by our success with The Enchanted Forest and boosted by the introductory story of how our renown was spreading, we dived into this adventure...and were stymied by the first puzzle. We knew what they wanted, we just stumbled on how to get it. (To be fair, every answer in Exit revolves around revealing a three number combination so you always, roughly, know what they want). This became a common theme throughout our adventure. We were always “In the Ballpark” when working on the puzzles. I would even say, following this baseball metaphor, that with most of the puzzles we always made solid contact and knocked it out of the park...just slightly foul. The challenges we ripped though with barely a bump were almost as fulfilling as the ones where we had what the game wanted, just not how it wanted it, were frustrating.

The Cemetery of the Knight is rated 3 out of 5 for difficulty, which is one notch above the last Exit game we played. But the difficulty jump is mostly in that it doesn't follow a direct linear path from start to finish and hits you with that "outside the box" moment much sooner. But then it repeatedly hits you with other “Outside the Box” moments as you progress...so much so that it feels like they went to the well a few too many times in this release. Most of the puzzles keep you immersed in the story it is telling. However, one stood out in that it both pulled you from of the narrative and was just a little too “cute” for it's own good.

Let me go back to the “direct linear path” subject I mentioned above. Some other Exit releases will have you starting at the beginning of the a book and solving the puzzles in order. Cemetery of the Knight has you jumping around the book. And while it doesn't appear to be a linear path, it has the issue that you will gather clues and hints for a puzzle but not ALL the clues that you need to solve it. This lead to a few frustrating moments of us “wasting” time on a puzzle that we simply didn't have all the pieces needed to solve. So, in the end, despite the illusion on non-linearity, you still end up solving the riddles in a specific order. I just wish that if the game is going to include a star rating system for how fast you complete it and how many hints were needed that the layout itself was not part of the problem in achieving a “better” score.

Every Exit game gives you a list of things you will need to accomplish your mission. Cemetery of the Knight lists “A piece of paper and pen to take notes.” We grumbled after finishing this adventure that they should have included a few more items on the list: Like a flashlight (if you are playing in anything besides full noonday sun), scissors, a ruler, and something like a [redacted].

I know it sounds like I am being harsh on Cemetery of the Knight but we did really enjoy it. We had a number of “High Five” moments when figuring out a particularly perplexing puzzle. I wouldn't suggest it as a starting point for the Exit series, but it is a fun experience if you have found yourself addicted to Exit.

January 10, 2021
Rating
3.0
Exit: The Cemetery of the Knight
We had a number of “High Five” moments when figuring out a particularly perplexing puzzle. I wouldn't suggest it as a starting point for the Exit series, but it is a fun experience if you have found yourself addicted to Exit.
W
WadeMonnig Top 10 Reviewer 195 reviews

barrowdown replied the topic: #318238 20 Jan 2021 22:50
We have played sixteen Exit games and this one was firmly middle of the pack. There are worse ones in the series, but there are definitely better ones. I do not remember this as being as linear as the "linear" ones (the ones where you actually move one page at a time), but it has been a while since the last wave.
Read More...