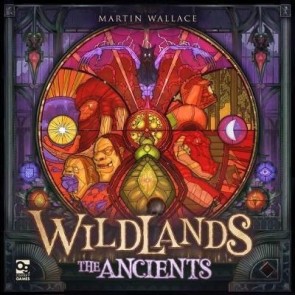 Atop the box of Wildlands: The Ancients is a window into another world. In faux stained glass, there are monsters and wizards, automata and minions. Inside, beneath rules and a new double-sided board is a tray of crystals, cards and chits. But what really draws the eye are the miniatures. Imposing and ink-washed, they bring to life the horrors of the cover.

Wildlands: The Ancients is an expansion to Wildlands, one of my favourite games. Previous expansions have focused on adding more boards and factions to the game. This does, too. There are new colours to use for my Adventuring Party and Unquiet Dead expansions. You can use The Ancients as a faction in a normal game or with new rules for a team game allowing up to six players.

But that’s not why my heart is beating a little faster. The core mechanics of Wildlands don’t benefit all that much from extra content. What’s raising my pulse in the dark days of winter and the darker days of lockdown is that The Ancients lets me play Wildlands solo or as a two-player co-op.

So the thumbs go to work as I punch out trap tiles and minion counters. The box also contains several scenario sheets. As I set thing up it becomes clear this is going to be less like the tactical combat of the base game and more like a narrative dungeon crawl. My excitement mounts. 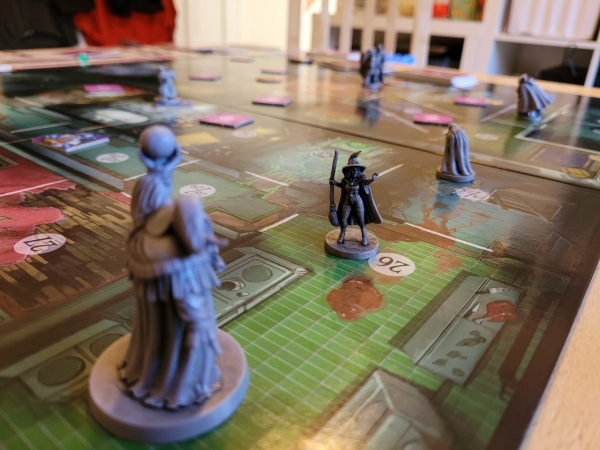 The first scenario pits a faction of my choice - I take the wizards from the base game - against a monstrous mammoth-like magus. The core of Wildlands is my hand of multi-use cards each of which has a combination of symbols allowing certain models to take certain actions. To win I need to find and collect five crystals from among the confetti of face-down tokens on the board. The first order of business, then, is to flip some tokens.

Going through my hand I identify some cards I can use to move without sacrificing utility for future turns. Two of the three wizards I move blunder straight into stasis traps. These are awful. They stick the poor victim in place until all the stasis traps get triggered. Since treasure is also on some face-down counters there’s nothing for it but to make counter-flipping my priority.

Unfortunately, there are minions spawning who are going to try and thwart me from doing just that. Elementals start creeping around, throwing area and melee attacks at my poor wizards. Each scenario has its own two AI decks, one for the minions and one for the boss - The Ancients of the title. These also govern events that happen, including moving along a narrative track that will eventually lose you the game.

As fast as I frantically move my three remaining wizards to try and free their comrades, more minions pour onto the board to slay them. This scenario has a special rule that makes minion actions stack, so the fact I’m not killing them leads to an exponential problem. The horrible elephantine magus causes the first casualty, teleporting its victim to itself followed by a chain of attacks.

As in the base game, capturing a crystal requires three cards with a matching symbol, which is a big ask. I’m torn between moving, attacking and hoarding my cards to get crystals. Caught in a three-way bind, it’s all downhill. I do free my trapped comrades and capture three of the five crystals in a desperate finish, but the fire is burning out of control. My last wizard makes a brave stand, blasting left and right, before the time track finishes to end his misery. 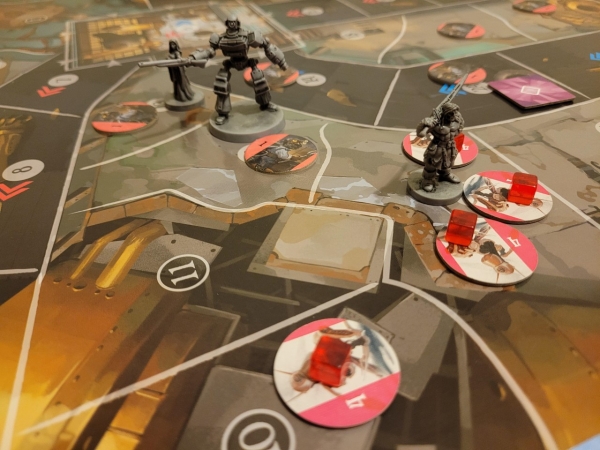 Enthused, I try scenario two, a battle against an invulnerable clockwork automaton. Because it seems appropriate I play on one of the new boards, a diabolical factory with moving conveyor belts. In this scenario, the board floods with vicious steam gizmos and gnomes that scuttle after them and heal them. Everything is in motion, and I’m blessed with that rarest sensation, playing a solo game that feels like I’m against a live opponent.

Not least because it proves very difficult. Drawing no less than six of the same symbol in my opening hand I bag my first crystal fast. But the gizmos prove an unholy terror, getting free heals from the gnomes and surging into attack as soon as they slow down. Two of my characters snared in stasis traps look easy pickings but it’s one of the others who dies first. Each counter flip is an agony of tension.

With only one free character it looks like it’s game over: a dead-end where my only surviving characters cannot move to free themselves. But a lucky break finds the last stasis trap, freeing us all. We manage four crystals before we're overwhelmed by a poisonous fumes event but it’s mostly luck. There must be a secret to this adventure but I don’t see it. And the cul-de-sac of stasis traps is beginning to frustrate me.

To try and work it out, I grab a reluctant teenager to try the scenario again, this time co-operatively. In co-op there are two scenarios: on top of the clockwork terrors we choose the rise of the Lizardfolk. This puts a paltry two minions on the board but, as we soon discover, the card deck makes them hit hard and the weaker form can evolve into the stronger one.

She takes the wizards and I take the Unquiet Dead in a combination that almost writes its own backstory. After a couple of uncertain turns, we’re pinging back and forth like a single mind. Us having our own warband, our own cards and our own enemies to control combines with the decision tree of the game to make it feel like real co-operation. You could boss someone round in Wildlands: The Ancients but it’s more fun to keep hands secret while we scheme over the map. 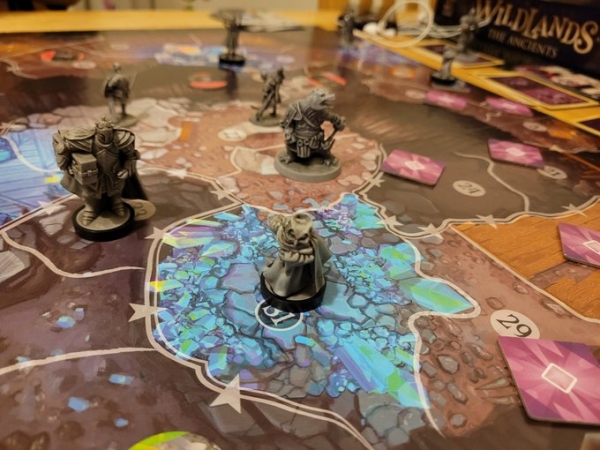 The flexibility of the dead proves a huge boon in capturing crystals and despite casualties to the reptiles and gizmos we’re soon four crystals up. No frustration from stasis traps two-player: there are more models on the board to find them all and close them down. Monster behaviour plays out differently too. Things fall out in such a way that the minions move more but don’t advance the event tracks. They cause havoc but it’s offset by the bosses not being summoned.

Then, disaster. The very last crystal appears in the corner space furthest away from any of our surviving figures. It just so happens that both the wizards with flying icons are still alive. My daughter moves one closer, plays a card to draw two more and gets: another flying symbol, another draw two cards. She does it again. With mounting excitement, the cycle repeats itself, all the way through a reshuffle to take the victory in an extraordinary train of thrills.

As we pack the box away I ask her how much she liked it. “Three and a half stars,” she sniffs. I remind her of that last turn, counting down the cards to the win. “Okay, four,” she replies. It takes a while to pack away all the extra card decks, just as it takes a while to set them up. But in most other respects, Wildlands: The Ancients is a doozy. Swingy and random it may be, but it’s the closest I’ve ever felt the plastic and cardboard of automated opposition get to flesh and blood.

Andi Lennon wrote: Reckon this would work with the Dredd game?

Yes, but I wouldn't recommend it. Not only do you get a thematic clash but you'll end up with some unused content in the box and you'll have to do a bit of work translating the action symbols between the two games. And it's just not worth it when the Dark Judges expansion does pretty much the same thing without those downsides.
Read More...