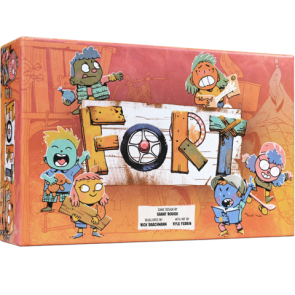 They’re mean because they don’t know any better. They say hurtful things, they pick on each other, they get in fights and pull each other’s hair.

And then in a flash, it’s all over, it’s like it never happened. Two kids who “hated” each other a few minutes before will happily hop on their bikes and race each other to the corner store for candy.

Fort is a 2–4 player deckbuilding game designed by Grant Rodiek and published in 2020 by Leder Games. With a development assist from Nick Brachmann, Rodiek reimplemented his own game, SPQF, with a new theme: kids being kids. Instead of building up a great civilization, you’re a bunch of neighbourhood youngsters building a cool fort, meeting up at the park to swap pizza and toys.

The game’s cards represent the different kids that you can “hang out” with, who give you access to a number of different abilities. You’ll spend the game playing these cards, acquiring new cards, and making your deck more powerful each time you cycle through it.

But Fort is not your typical deckbuilder. It delights in subverting a lot of the expectations for its genre.

There are no resources you have to spend to acquire cards; you get to take a new one for free every turn.

You don’t play every card in your hand on your turn; you get to play one.

And the cards you didn’t play on your turn? They get placed in your “yard”, where other players could potentially add them to their decks on their turn.

All these mechanical choices help Fort to break free from the usual gameplay pattern of a lot of deckbuilders: play out your whole hand every turn, buy the best (or at least, the most synergistic) card available, and churn through your deck a bunch until someone hits the win condition.

Instead, there are a couple of different paths to victory. The game ends at the end of a round when a player hits 25 victory points, or completes the last level of their fort.

There are a lot of things to like in Fort, and they often stem from how it breaks from tradition.

Only getting to play only one card on my turn — with the rest going up for grabs ⁠— made for some actual tough decisions about which one to play...and which ones I’d have to risk losing. Multiple ways to trigger the endgame also appeared to enable different strategies. Should I play aggro and race to complete my fort first, or tweak my deck to make it spew tons of points?

And there’s no getting around it: the flavour in this game is excellent, and the artwork from Leder Games stalwart Kyle Ferrin in support of it is impressive. The kids on these cards are chock full of personality. They’ve got nicknames like “Bug” and “Sparky”. There’s a kid with a big container of cheeseballs. Each card has a “suit”, but instead of hearts and clubs, you get skateboards and school glue. Rodiek and Leder Games rightly swerved hard away from the staid “civ-builder” theme of SPQF, into something quirkier, more nostalgic, and definitely unique.

I mostly enjoyed my time with Fort.

Okay, look. I think Fort does a lot of things right, thematically and mechanically. It’s a sharp little game.

Maybe a bit too sharp, in fact.

I found Fort at two players aggressively tight. And I don’t mean tight like “a perfectly wound bowstring.” More like “the school bus is about to leave without me, and if I don’t catch it I’m gonna be late for a test.” The player going first won every two-player game of this I played. While I definitely do not have enough plays at two to make any claims about balance, each of those games was a frustrating experience for one of us.

While the game definitely seems to allow for a lot of player choice, it often led to the winning player taking the same path to victory each time — rushing to complete the fort — with the other player having no choice but to follow closely behind, like a kid yelling after their friends to “wait uuuppp”.

This is exacerbated by the existence of a handful of bonuses to players upon reaching particular fort levels. If one of us made an inefficient decision early, it felt particularly punishing to watch the lead player jump to the next level and have first crack at the good stuff.

At higher player counts, Fort definitely opened up, but I still felt a weird sort of what I can only describe as...anxiety?...as I played.

While it might be about kids playing with toys and eating pizza, Fort actually felt very much like my experience of being a grown-up: worrying about falling behind in your goals and not catching up, second-guessing all your decisions, watching everyone else do much better than you are, and feeling like there’s nothing you can do to succeed.

Before writing this review, I took the time to play one or two more games to see if something would click for me, but I couldn’t find it. And I realized: for a game about play (at least thematically), it consistently felt like a lot of work. It’s possible that there exists counterplay and counter-counterplay for successful strategies in this game, but I didn’t feel particularly excited about trying to find out.

There’s definitely an audience for this game; a group that would play it every Sunday until the cards were ragged and the box torn. People who thrive on the “make-or-break” turn, the folks who relish when every single decision they make will not only matter, but might determine whether they win or lose.

Well, that’s not me. And that thematic incongruousness hits all the harder for me as a result. On the surface, Fort looks like a callback to the days of running around outside, catching grasshoppers, endless summer days where you had the freedom to do whatever you wanted, and nothing mattered.

Fort is mean. And not because it doesn’t know any better.

In fact, I think that meanness is actually a “back-of-the-box” bullet point in its favour. This is a scrappy little game you can roll up your sleeves with a couple friends and really dive into, like a backyard wrestling match. There is a depth of strategy and potential for metagamery here that might withstand hundreds of plays.

Not for me, though. I think it plays a bit too rough.

If you enjoyed this review, why not follow me on Twitter, catch me streaming on Twitch, or check out my rulebook editing / content writing services at Ironclad Writing!