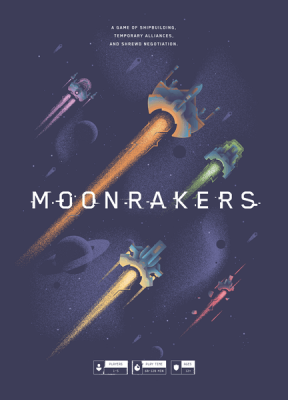 When a game makes me think of a Sid Sackson design, I’m pleased. And Moonrakers, a very nice production from Austin Harris and Max Anderson from IV Studios does exactly that. The Sackson game I’m reminded of is the great I’m The Boss, a title where you’ve got to get other players (representing investors) on board with you to close deals. The idea is that you use the value of the deal’s payout to negotiate participation by promising dividends. I love this concept, and Moonrakers does something similar but in the modern context of a more complex deckbuilding game with a science fiction setting. I’m also reminded – very favorably, again- of Cosmic Encounter in that it is very much a game of convenient alliances and occasional diplomatic imbroglios.

On the surface this is a great looking game- the graphic design is uniformly excellent and I’m just in love with the monochromatic illustrations and text on the cards. IV Studios provided me with a copy of the Kickstarted first edition so I don’t know if the metal coins, comic book, embossed boards, and other luxury upgrades will make it to retail but it’s such a well-made, beautiful game in the edition I have played. I’m not sure that the setting is as specific as that comic book wants to make it, but the concept of space mercenaries competing – and collaborating – to complete contracts for Credits and Prestige while improving their ships and crew is solid enough to drive the gameplay and its mechanisms.

A lot of the design is fairly standard stuff- you start out with a seed deck of Action Cards and there are displays for Crew, Ship Part, and Contract cards. Every players also gets a couple of secret objectives. Winner is the player who gets 10 prestige from those objectives and from running Contracts. Don’t shrug yet. The core gameplay is not common for designs with a deckbuilding core because it is intensely focused on inter-player negotiation. This is not a heads-down efficiency exercise or tableau builder, and your ability to cut deals and determine how much you are willing to give away to get ahead are key competencies.

On your turn, you have a choice to stay at your base or take on one of the displayed contracts. If you stay, you get to draw new objective cards, refresh your hand of action cards and earn a credit. Which you’ll probably have to do a couple of times in the game, but the real action is when you head out to take a job. The Contract cards fit into four categories (Explore, Rescue, Delivery, and Kill) and these categories sort of roughly inform what kinds of cards are needed to complete them as well as the relative danger (and of course value) of them.

Each contract offers some combination of a Prestige value (these are the VPs), bonus card draws, and a credit payout. Each indicates a numerical value and an icon corresponding to the types of action cards found in each player’s deck. In order to complete the Contract, cards of those types must be played that equal or exceed those values. More difficult and lucrative contracts of course require higher values, and of course you’ve got to get other players on board to contribute cards to hit the minimums. Additionally, each Contract has a Hazard value, which requires a number of Hazard dice to be rolled with the recipient potentially losing Prestige.

Here’s the fun part. All of the above are negotiation tools. So you can bring on a player promising to fulfill all of a high Damage value by offering them the Credit reward ifthey’ll take on the Hazard dice. Or you could split everything equitably among players each agreeing to contribute one card. It’s also possible to go the dirtbag route and agree to something you can’t actually provide to sabotage the run. Failure blows the whole thing but somebody’s still gotta roll those Hazard dice.

When it comes time to execute the contract, there’s a sort of Dominion mechanic where you have a default single action, but the Action cards all have a knock-on effect of possibly giving you additional actions, drawing more cards, and so forth. So comboing up can extend your five card hand and single action limitation. Maybe you’ll agree to roll the hazard dice knowing that you’ve got a a handful of shields. Or maybe you’ll risk soling a contract with a good hand of Thrusters and Reactors. There’s a lot of gameplay in how you run these contracts, beyond the negotiation element.

What’s more, if you have purchased Ship Parts, they may increase the value of cards or provide you other advantages. Crew cards are put into your action deck and generally function like expanded or advanced versions of the basic cards, giving you an additional edge when you have one or more of them in your hand during a Contract. The deckbuilding in this game isn’t particularly extensive or elaborate, but buying just a couple of Crew cards and looking for synergetic Ship Parts can make for some excellent strategic play.

Now, with all of this on the table and making good impressions here’s where Moonrakers starts to falter. The game supports five players and it is absolutely best with five players. You really need that full matrix of possible allies and negotiators involved for this game to function at its peak potential. Anything less than five, and you start to lose some of the game’s dynamism and the wilder aspects of wheeling and dealing. It’s not that the game is unplayble at four, three, or even two players (with an automata third player represented by a “Mercenary Deck”) but it just isn’t really possible to replace the squishy human element of bartering and bickering. There is a solo option with no negotiation, but frankly I felt like it was a waste of time – this game needs people.

But people also take time. And that means that Moonrakers can also run way too long. This a two hour game with five. I’m wanting this game to reliably play at 60 minutes, 75 tops as that feels correct for the scope of the game and the scale of development that goes on. This is a game about talking and working out deals, so that is naturally going to make the time estimate soft but at two hours I’m not sure there is enough here for it to finish as strong as its first hour.

I really like this game, regardless, because I really like negotiation games. I’m still a regular Bohnanza player and I’d love to get Traders of Genoa back to the table sometime, let alone I’m the Boss. I enjoy brokering deals and breaking them when it’s advantageous, but I know there are lot of folks out there who don’t like the inherent competitiveness and “take that” tone of negotiation games. I think that’s really weird, but for those of us who love the table talk and used car salesman tactics Moonrakers definitely delivers a kind of experience that is quite uncommon among game designs today, where “acquire things and fulfill recipes” is too often a solitary, isolated efficiency exercise