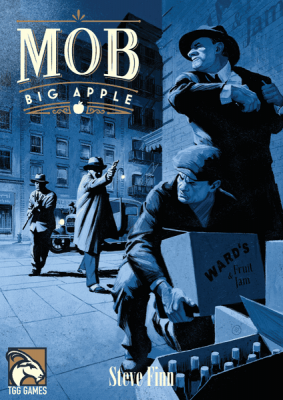 I’m a sucker for a gangster themed game. What’s that line? ‘Ever since I can remember, I wanted to be a gangster.’ Of course I don’t really, but who doesn’t love a good mob film. I love the prohibition era of America. A period in the nation’s history when the country was racked by contradictions. Common people risked incarceration for a drink, and death when they could get one (deaths from alcohol went up, not down under prohibition). It gave rise to organised crime in the states and the consequences are still being felt to this day. It’s an era much romanticised with illicit speakeasies, jazz, wise guys, and flappers.

I’ve been a little down on using Tabletop Simulator and other platforms to review games over the last year. I found it reminded me that I can’t play in real life, and that just made me sad. However, I think they are a great way for KS projects to give people worldwide a free taste of their game. When Matthew Williams from TGG games got in touch about their new 2 player mob themed kickstarter, I jumped at the chance for an easy in back to reviewing a bit more regularly. The game is designed by Steve Finn, with art from Ossi Hiekkala and David Sookochoff.

I really like the 2 player design space. My wife and I really enjoy Patchwork, Jaipur and I’ve recently picked up 7 Wonders: Duek, though the jury is still out on that one. Mob: Big Apple is another entry into this space, a simple proposition where at the end of 3 rounds of jostling, shooting, and driving around the city that never sleeps, the player with the most illicit liquor wins. 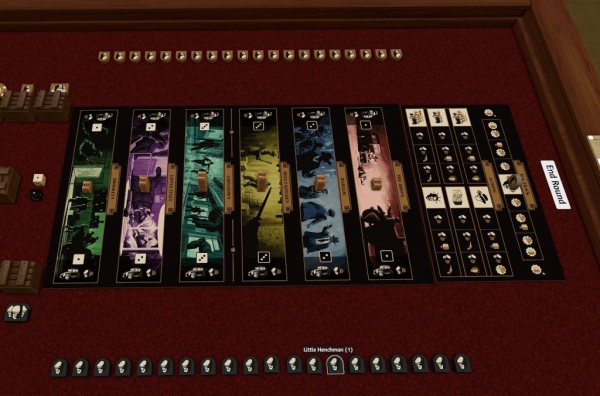 It’s a push and pull battle, each side having the same resources to take their fight to Hell’s Kitchen, Brooklyn, and beyond. The only random element comes down to a pair of dice that let you load your mobsters into cars, ready to be delivered to one of the 6 locations piled high with booze.

Cars loaded you know have a resource and action selection game with a bit of a twist. Resources are your gangsters, and they can go to mark your territory or to making actions happen. The actions are powerful, allowing you to move crates between locations, jump cars, drive to the locations before the turn ends, put pressure on your opponent with a DA, shoot people, or mess with the moles.

The game in full flow. Poker chips are moles.

Ah moles. A neat mechanic that gives this game a little kick. These are basically more gangsters, but their number is hidden from your opponent. Their number can be revealed, making them vulnerable to attack, but until then they move silently. Is that a bluff? Why did they move that mole there? A little subterfuge in a game can go a long way to giving a real feeling of tension.

Of course no mob game would be complete without a bit of violence. At the end of each round, your gangster pull up in cars at each district and lay into each other, blow for blow. Come the end of round three, your moles and gangsters add up to determine control of each location.

All this combines to make a game that has a great little puzzle at its core, plays quickly, and has a decent number of paths to take to victory. I’ll admit I found the theme of the game a little pasted on, but it totally sufficed to give context to the action. It’s not the most mind blowing 2 player game ever, and it’s not doing anything particularly new. However it is very well put together, with a good rulebook, and is a great calling card for a new publisher. You can find the game on Kickstarter right now.

January 30, 2021
Rating
3.0
Mob: Big Apple
Iain sends one of theirs to the morgue in this 2 player game of mobsters and liquor.
T
thegiantbrain Top 50 Reviewer 36 reviews