Fox on The Run: a The Fox in the Forest Duet Board Game Review 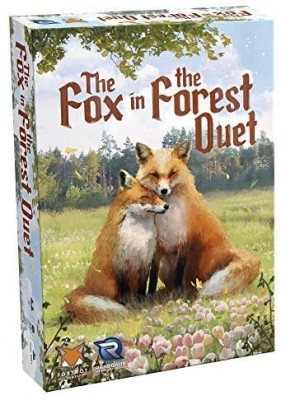 I've been an unabashed fan of the original Fox in the Forest by Joshua Buergel since I picked it up years ago. (You can find my review for it here). It really made two-player trick taking games “happen” and I still break it out every few weeks and completely enjoy it. So, what took me so long to actually try The Fox in the Forest Duet? Well, the fact that the game was designed by FoxTrot games was a eyebrow raiser. Too many years of reviewing videogame sequels after they are handed over to other designers has tainted me on that specific move. Also, Duet is exclusively a cooperative game. The co-op games that I enjoy are generally few and far between but my recent enjoyment/obsession with The Crew: The Quest for Planet Nine made me think it was about time to give Duet a shot.

The Fox in the Forest Duet gameplay consists of a tug-of-war taking place on a path through the titular forest. Depending on what cards are played and who wins the trick, the players move along the path and pick up gems. Collect all the gems before the end of the three rounds and you win. Of course, there are power cards that allow you to manipulate the direction and number of spaces moved along the path. If a trick moves the “party” too far in one direction or the other, you become “lost in the forest” and the path both becomes shorter via placement of a forest tile and you get closer to losing the game (since there are a limited number of forest tiles to place.)

The game comes with a variety of different difficulty levels via a two-sided board, the number of gems placed and how many forest tokens you are allowed. Level One difficulty is decidedly Novice. In my first game with one of my partners from The Crew, we breezed though and won the game in the second round. We immediately jumped up to level two difficulty and still managed a win. Of course, this game was much tighter and took us down to the last few cards to come out triumphant. Learning the card powers was relatively easy, since some are carry overs from the original Fox in the Forest. Since you don't deal out all the cards in the deck, you are never quite sure what the other player has, so there is that bit of “Do they or Don't they?” experience when playing. The lack of a “hint” mechanism like that found in The Crew is sorely missing, as there are very few chances for you to silently communicate with your partner and that is generally when using the Gift card (where you select a card from your hand and exchange it with the other player.) Even then, since you should do this simultaneously, what information you might gather can simply cancels itself out. 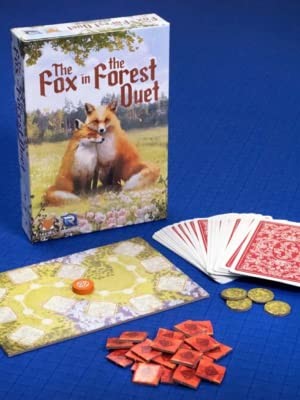 The thing I really missed when playing Duet is the “Don't worry, we got this!” moments from The Crew. Sure, about half the time (Spoiler Alert) you don't really “got this” when you think you can pull out a win in The Crew but even those losses keep everyone on the edge of their seat.

“Beat your previous best score!” hasn't really been a incentive to continue playing a game since I put XTC , WLJ, or XXX (or whatever my three letter moniker of choice at the time was) into ”Enter your initials” in 80's arcade games. Even then, part of the thrill was beating other “real” peoples scores. When the entire top 10 consists of scores that I personally achieved, it lacks any significant thrill. More importantly, Duet is not like an arcade game with unlimited scoring potential: There is a ceiling on how many points you can score and the scoring 49 points instead of 48 because you have one extra card left in your hand doesn't feel like much of an achievement. 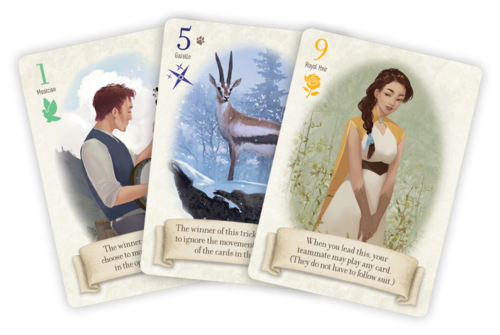 A duet, by default, requires two people. But none of my two-player cohorts have any interest in continuing to play The Fox in the Forest Duet. My wife straight up told me it was “Boring” and, even in situations with solely two players, my other gaming partners routinely pass it over and I don't have a desire to point them toward it. Unfortunately, this Duet didn't sing, or hum, for me.

January 31, 2021
Rating
2.5
The Fox in the Forest Duet
don't wanna know your name
'Cause you don't look the same
The way you did before
Okay, you think you got a pretty face
But the rest o' you is out of place
You looked all right before
W
WadeMonnig Top 10 Reviewer 195 reviews

There are no user reviews for this listing.
Already have an account? Log in now or Create an account
Discuss this article
Log in to comment
Posts in discussion: Fox on The Run: a The Fox in the Forest Duet Board Game Review

Michael Barnes replied the topic: #318803 03 Feb 2021 18:27
My daughter loves this as well as the original game so I’ve played it quite a lot...it’s her favorite other than the Silver games. I think duet is definitely a lesser game than the original and it’s interesting that you figure The Crew so heavily into your all-out assault on this gentle game. The Crew is, I think, a -monumental- trick taking design that may have single-handedly resurrected the genre. And it is tough to come back to Fox Duet after The Crew. Unless you are Scarlett.

At first, MAR because those are my actual initials. My dad and my uncle (twins) both have the first three letters of their first name as their initials, so my parents named me that way; my grandmother always insisted that it wasn't intentional and was just a coincidence.

Later I switched to LFC, because Liverpool. I would, however, probably never play Fox Duet because co-op.

Michael Barnes wrote: My daughter loves this as well as the original game so I’ve played it quite a lot...it’s her favorite other than the Silver games. I think duet is definitely a lesser game than the original and it’s interesting that you figure The Crew so heavily into your all-out assault on this gentle game. The Crew is, I think, a -monumental- trick taking design that may have single-handedly resurrected the genre. And it is tough to come back to Fox Duet after The Crew. Unless you are Scarlett.

I hardly think this review is an "all out assault" i would refer you to our star rating system at TWBG but you actually wrote it. I state my bias versus co op games in the opening paragraph, Duet never overcomes that. After a dozen games, i know it's not for me or my game group. I think it is a fair rating of my experience with it, better than throwing 4 stars at it then putting it up for sale a month later.

Ah_Pook wrote: I like Duet more than 2p The Crew with the dummy hang, though I'm happy to play either.

In that specific case, I'd rather just play different two player games. The original Fox in the forest, cuthulu wars duel, Cyclades, or Nations. The Crew doesn't thrive as a two player game, just like Dune Imperium doesn't.