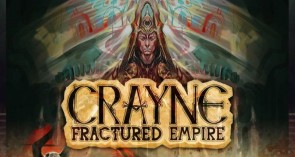 The Empire of Crayne has fallen to chaos. Riven by cataclysmic events such as the Great Flood and the unyielding Tide of Dust, closely knit factions have splintered, paying homage and lending their blades to a series of local Lords, each of whom vie for dominance and influence throughout the fractured land.

These grim times make for strange bedfellows, and in desperate acts of pragmatism, demons take to the field beneath the same banner as paladins, whilst elves and dwarves stand shoulder to shoulder in service of whomever proffers the weightiest purse. Alliances are sundered, forming and reforming as the tide of influence foams and recedes again and again, pitting brother against brother for the lure of filthy lucre. 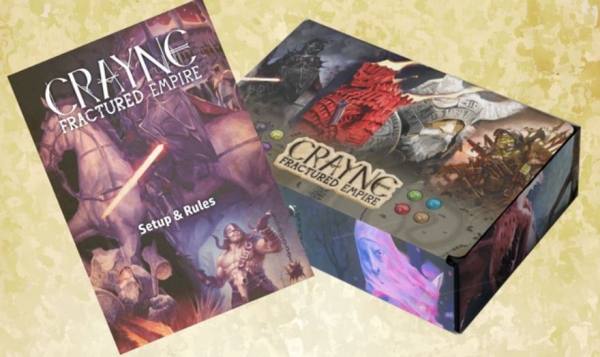 There are no heroes in Crayne then, just an endless succession of civil strife at the behest of these velvet-hemmed lords. And as it splays upon your table, one to six of you will fill their boots as you marshal the forces of each faction to lend labour to your own inglorious ends.

And so we have in place all the elements for a strategic deck-builder that will see players trying to muster a roster of champions to fill their hand, create robust synergies and winnow out the dross as they both scheme and react to contingent circumstance and a shifting marketplace as their fortunes evolve.

It’s at this point I should admit I’m not exactly a scholar or old-hand when it comes to pure deck-builders. Magic and its many bastard offspring were a fleet that left me on the island, but it is evident even to me when a core mechanic has been harnessed in a way that creates interesting decisions, tactical gameplay and a good time at the table.

Crayne makes a strong first impression by being wildly accessible from the get go. The rulebook is slim, the sequencing makes sense and even a neophyte will be up and running within minutes as the core mechanisms lock into place with a practiced precision that comes with constructing their home upon well-honed foundations.

With the inhabitants of empire divided into eight factions, each player will receive a starting hand of basic units drawn from a selection of the following forces with which to commence their quest for influence and domination:

Servants of the Baron – Bleached bone undead types, ghoulish thralls and practitioners of the necromantic arts

Demons of the Rift – Accursed and abyssal fiends, plucked from the lecherous perdition of the pit

Knights of Kalimas – Crusaders from the realms of men, a holy order though not without the taint of blood upon them 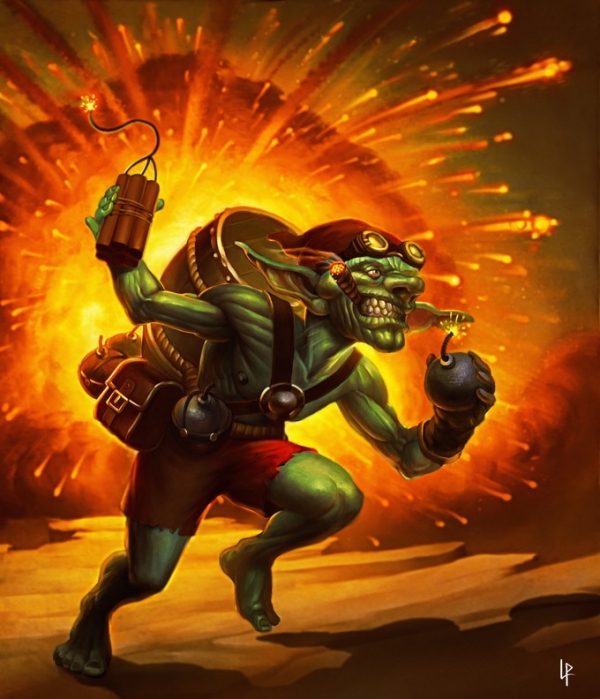 So far, so generic right? However in its embrace of archetypes, Crayne once again leans into its accessibility. Factions and their specialties are easily parsed based upon the canonical stockpile of lore we’ve all acquired, and players can immediately get to grips with the strategic tinkering required to build their engines of domination, card-by-card and combo-by-combo.

Each starting deck is also seeded with an abundance of ‘Trade Cart’ cards which act as the basic starting currency that players can deploy to purchase cards from the auxiliary market- a central repository which is refreshed from the auxiliary draw deck – a teetering pile of possibilities that sits astride the discard pit, an unfolding mausoleum where cards are sacrificed in the whittling art of purging one’s forces.

As you draw and deploy your hand you’ll be trading blows in a series of rounds comprised of four phases – Assembly, Attack, Revenue and Clean-up. Players will simultaneously choose and reveal a card from their hand, repeating the process until each has a selection of five units arrayed before them. In clockwise order, starting with the rotating ‘Current Lord’, attack and defence modifiers will be tallied, combos aligned and smitings enacted, with the recipients ‘Influence’ score (essentially their hit points) either rising or falling as a result. This is followed by the revenue phase where players will tally the currency enabled by their hand to recruit new forces from the market, hire mercenaries, erect strongholds and basically follow the tropes of every deck-building game ever. 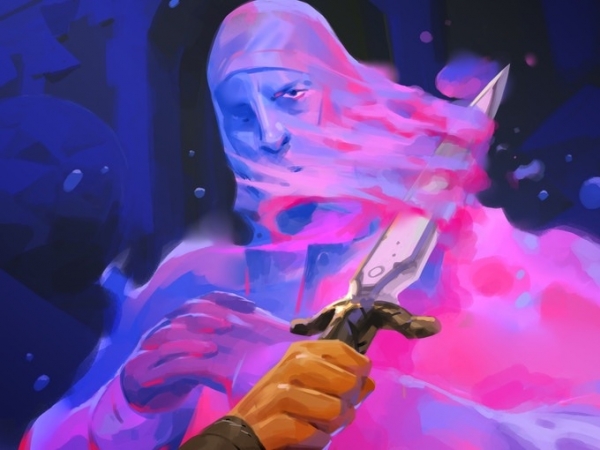 It’s in the details that Crayne’s allure emerges, however.

Simultaneous reveals of a mounting hand enable players to adjust their tactics to an evolving playspace each turn, forcing them to be mindful of their opponents ambitions, their own intentions, potential synergies, the need to balance offence, defence and status effects, all whilst balancing their funds and keeping a keen eye on the marketplace as it spits out ever more intriguing combinations and possibilities. Despite the fractured politik of empire, factions are still wont to align with their own, and so choosing a playstyle based upon the strengths of one or two primary factions to recruit can pay dividends in the long game as the synergistic potential of your hand multiplies exponentially.

And it is a long game. In my playthroughs we averaged about an hour per player and it was generally only in the stacked home stretch that the possibilities of play and the tight decision space really started to pinch as we felt the heft of consequence. Early turns can feel wildly preliminary, with hands choked by Trade Carts that see the market fluctuate in repeated fistfuls of opportunism as players seek to build their army – not quite mindful of their strategic arc until later in the game.

This of course, leads to a bloated draw deck as things start to spiral to the more climactic portion of the game, and although there are options to refine your deck through the use of the Sacrificial Pit- such opportunities are often fleeting. An even richer decision space could be crafted here with the addition of a more brutal and immediate means of dispatching one’s own fodder after they have outgrown their usefulness in the services of their lord. 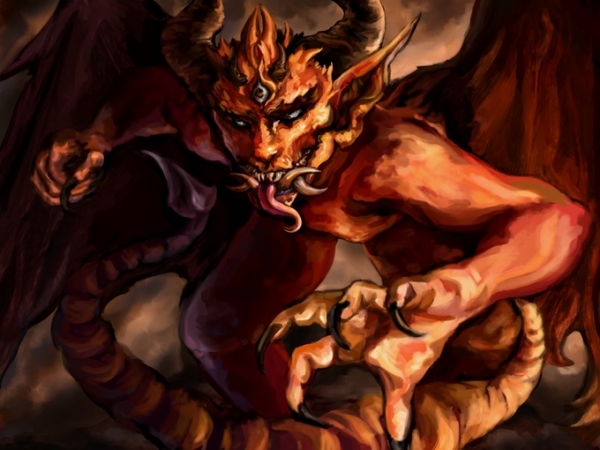 A compact affair, with accessibility again in the ascendant, each aspect of this modest offering has been crafted with utility in mind. Cards are easy to read, symbolism is sparse, offering an immediate clarity and everything aligns in service of the ‘easy to learn, hard to master’ balance that all good deck-builders seek to straddle. Its footprint is small, portable and influence scores are tallied simply with pen and paper, eradicating the clutter of bespoke gems or dials that might one day from a gyre in the pacific.

I do however, wish the cards were cut just a smidge larger so that they might do service to some of glorious art on display. Apparently developer Chris Fielder spent $17,000 on commissions in service of illustrating this world and it shows. Each faction has a distinct flavour, the overall feel is familiar though evocative, and captures a strange coherence despite the numerous different brush-hands involved (each of whom, awesomely, are credited on the individual cards).

The art does a lot of lifting as it brings to life the hungry ghosts, impious fiends, devious priests and towering golems at your disposal, so it’s a great shame that each illustration is crammed into a letterbox half the size of a card. Again- a decision almost certainly couched in utility, but with some tarot-sized offerings, they could really leap from the page and into play. 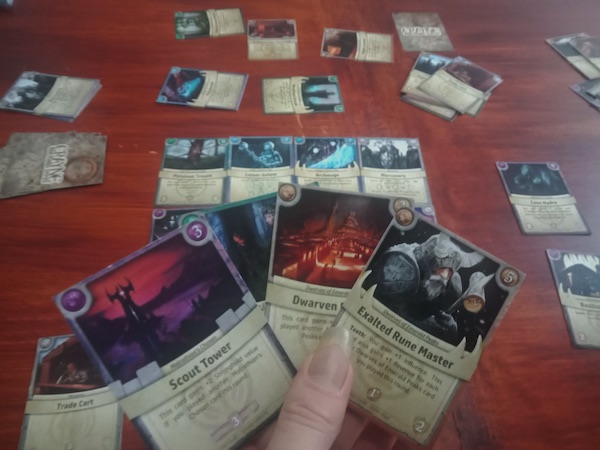 In the end, much like the land of Crayne itself- my thoughts on this game remain in flux. Clearly a labour of love – the devotion to balance, accessibility and playability shines through at the expense of perhaps creating something more singular and unique. From mechanics to faction types and the general trappings of the experience, this game throws a wide embrace. It’s an appeal which whilst welcoming, is perhaps overly familiar for anyone already steeped in high fantasy and competitive deck building.

For anyone looking for a solidly crafted, wildly accessible deck-builder that runs deep without being overwhelming however, then Crayne is an empire you’d be well served to visit. I know I’ve only scratched the surface here, and I look forward to digging deeper into the cults and wyrdfolk that populate this often enchanting kingdom.

All impression are based upon a prototype copy kindy supplied for this review. The completed version promises additional mission-based scenarios for solo play and team play variants. 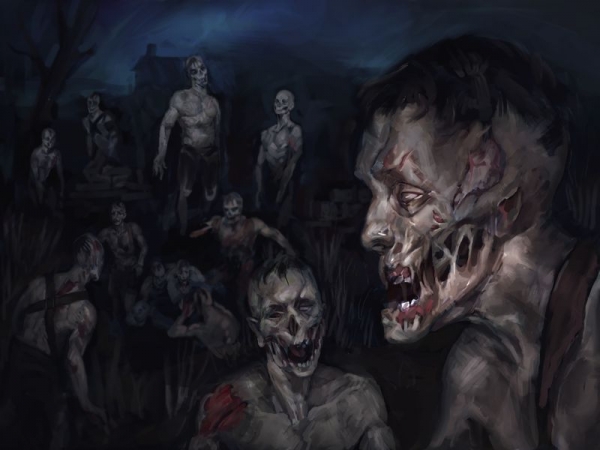 jason10mm replied the topic: #318831 04 Feb 2021 18:55
Not gonna lie, with that font i really thought this was CRAYON:Fractured Empire and I thought it was gonna be an edgy drawing game

jason10mm wrote: Not gonna lie, with that font i really thought this was CRAYON:Fractured Empire and I thought it was gonna be an edgy drawing game

jason10mm wrote: Not to derail your fine review, but just imagine all the funky crayon colors you'd get to use!

Imagine all the sneaky phalluses that would immediately be drawn!
Read More...