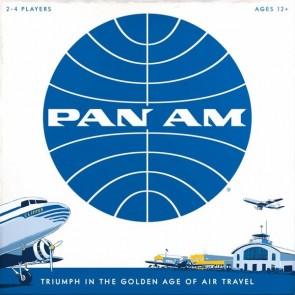 “Let’s play the aeroplane game,” I say. Despite having been born twenty years after it’s collapse, my daughter knows the Pan Am logo well enough to get the right box off the shelf. Or maybe it’s the sleek blue and white retro-styling of the cover and components. The interior is less inspiring: drab player colours and two card decks in black and dark blue that I shuffle together by accident every time.

Decks separated, I explain the game. You need route cards or an airport for the cities at both ends of a route and an aeroplane big enough to make the distance to claim it. It gains you income each turn equivalent to that distance, from one to four. Income is, in turn, used to bid in mini-auctions for route cards, airports and aeroplanes. You’ll also want a chunk of it to buy Pan Am stock, its price fluctuating with each turn’s event card, and the player with the most stock wins the game.

Like all the best economic games, these are the multiple legs on which you balance your strategy. You need the right combination of route ends and planes to get an income and you need the right income to bid for what you need. It’s very simple and very cunning and we don’t play enough games like this as a family. The kids are wrinkling their noses trying to follow the circle, looking for an obvious entry point that isn’t there. They find it awkward: I find it exhilarating.

Some of the routes on the board bear patterns of dots, triangles or squares. These are routes that Pan Am might expand into from its base in Miami, like the AI opponent in a co-operative game. But this isn’t a co-op, and Pan Am is a solid route to corporate profit, splashing cash around like a teenager with a credit card in its rush to expand. If it expands over a route you already own, you lose the income but get a single cash bonus based on the length. My early strategy is to grab these routes and hope for the payout.

Pan Am expands at random, based on the event card and a dice roll. I’m lucky on these early turns and reap the benefit. It lets me buy up stock while it’s cheap but leaves me short of income compared to my high-flying daughters.

As a result, I have to be judicious with my bids. And here I discover a curious aspect of Pan Am. There’s a worker placement aspect where you assign engineers to actions. But most actions are bids in an auction, and only one player gets the benefit. In theory, this should be a recipe for the constant tension of one-upmanship. In practice, there are too few engineers and too much choice to leave players battling to take the same option. It’s often easier - and cheaper - to bow out and take a lesser option for a bid of zero. 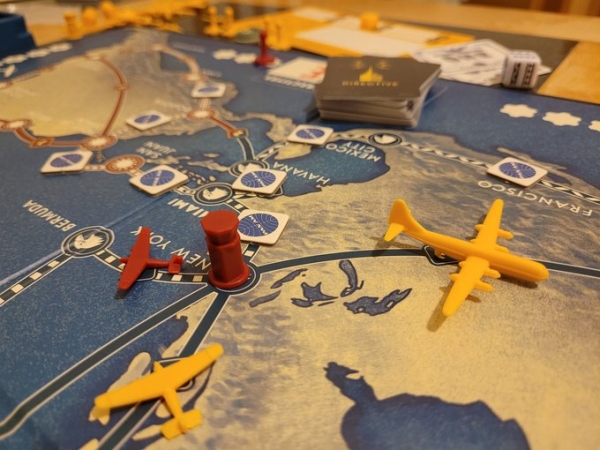 It does happen, particularly when it comes to aeroplanes. Planes that can fly route lengths of three and four aren’t available at the start of the game. When they come on the market, there’s an immediate bidding war, a spike of excitement, to get one. I have a trick up my sleeve: you can assign engineers to get Directive cards, which are one-shot bonuses. I have one that pays for any bid I make. So I crank up the auction to the maximum value, then slap it down to a series of satisfying groans.

Between them, the cards and the auctions and Pan Am’s expansion strike an almost beautiful balance of strategy and drama. Late in the game, we’re all caught in the same vice of whether to claim big routes for a turn or two of income or smaller ones that we hope Pan Am will gobble up. There’s a lot of furrowed brows and finger-counting as we try to plan ahead around the variables. One of the kids messes up, wasting actions and money. I get my sums right, but Pan Am doesn’t oblige and I’m left short, again.

Still, those early turns of stock buying are doing me well. Then, on the last of the game’s fixed seven turns, disaster strikes for me. My heart sinks as the event card says that all player’s income is double for the round. After selling out to Pan Am, mine is far lower than that of the other players. I snaffle what I can in a desperate last-ditch attempt but I figure that event has lost me the came. When we count up stock at the end, though, I win by a whisker. The different ways to approach the game and the events are better balanced than I realised.

A couple of nights later, we play again. After the initial deal of route cards, it’s clear to all that there’s only one way I can get a first turn route, which is to win the airport bid. So the first player slaps down a bid that it would be unwise to raise. I’m in an impossible bind: either I empty almost all my initial money into that bid, or I go without. I choose the latter and get no income. This leaves me limping along for the early game, but spending all my cash might have done the same.

With a play under our belts, we’re all a bit more circumspect this time. There’s no big-cash splurging. There’s a lot of snarls and cheers as the stock price goes up and down after someone’s made a big investment. The Pan Am expansion mechanic gives me room to make calculated gambles to try and catch up but this time, they don’t pay off. I can’t help but feel some frustration that I’ve invested in planning and been punished by forces beyond my control. But then, I had a good time trying, and a frisson of excitement as I waited to see if it would work.

As we pack away, though, it’s clear the family are more indifferent to their journey into the world of commercial airlines. This is the bind the game finds itself in. As a light-medium economic game, it’s great, up with Railways of the World: what it sometimes lacks in tension and depth, it makes up for in the silky-smooth way its accessible mechanics interlock. Yet games of this kind are inimical to the family market it feels aimed at. Gamers, though, can rejoice in the mass market prices and clearance sales this heralds, as they aim to take to the skies.

February 02, 2021
Rating
4.0
Pan Am
Super accessible for a medium depth economic game and with a fantastic balance between strategy and luck, but lacks a little in tension.
MT
Matt Thrower #1 Reviewer 286 reviews

This is one of the most beautiful and thematic graphic design jobs of recent years; the colours are perfect for the theme and the attention to detail in the graphic design is wonderful. Those player colours aren't supposed to be bright, they're supposed to fit perfectly with all the other colour and design choices, and they do.

Gary Sax replied the topic: #318996 08 Feb 2021 17:07
Based on the widly diverse voices singing its praise, this is like the one Prospero Hall game that feels like people will be playing it in 10 years, despite the fun novelty of the others.

After several plays I found myself wishing for a bit more teeth than the game can offer and kind of cooled on it, but it's still a fun ride.