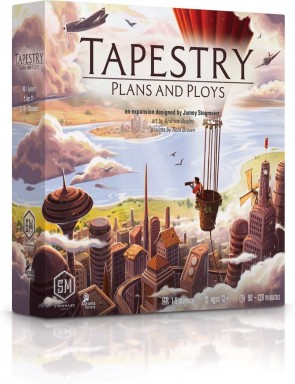 We were at the dawn of a new civilization. We didn't know it yet, but we were going to embark on an exciting adventure that would offer us a lot of new opportunities, some challenging times and many new discoveries. It would take a very long time indeed, but we would not only master fire, but eventually reach the stars. We would explore the world and stamp our mark on it. We were ready to make a reality of our Plans & Ploys by Stonemaier Games.

If you like Tapestry, then you will be interested in this first expansion. Plans & Ploys doesn't add completely new mechanisms and otherwise doesn't extend the gameplay as such, but it does add a couple of new things that fill in a couple of small gaps in the base game, as well as more of what you already know.

Also, please note that this article will directly name some of the additional civilizations, tapestry cards, etc. So there will be spoilers, but that's unavoidable, because I want to explain how the expansion makes Tapestry feel more rounded, more complete. So, if you really don't want to know anything specific, then don't read on.

I have to say that I have played the expansion only online, but I do have a physical copy of Plans & Ploys, so I can attest to the component quality. I might as well get it out of the way. As you come to expect from Stonemaier Games, the components are very high quality, just like for the base game. The colour matching to the base game is pretty good, even though the new tapestry cards' backs don't blend in perfectly with the original ones. Yet, the colour mismatch is tiny and quite hard to see, but when you compare old and new side by side, you can see the difference. I don't think it's a major issue, but something to bear in mind. 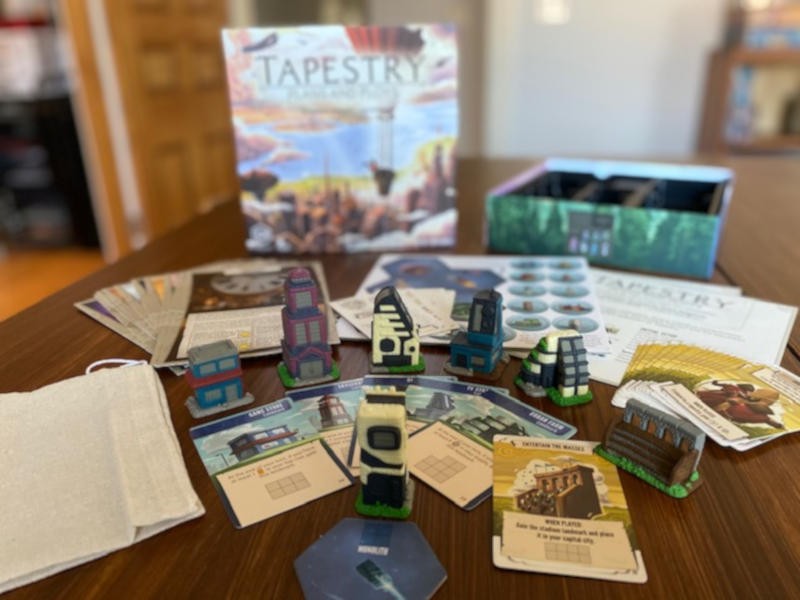 Let's continue with the new tapestry cards actually. They add more interesting benefits, but they also add a twist to the trap cards, making them feel less of a sure way of preventing an attack. It's now riskier to play a trap during a conquer action, as the attacker might trap you in your own trap. That's nice and spices up that part of the game, allowing for some extra strategies and tactics.

The new space tiles are also nice to see, giving you more of an incentive to try and get into space. However, the benefits of the new tiles seem to come a bit too late in the game, unfortunately. You basically get the opportunity to score 5 victory points every time you advance on a specific track, but chances are you can only use them once, because, by the time you've reached space, the game is nearly over. It feels like it would have been better to just get a one-off 5 points, but I suppose it's nice to try and time it in such a way that you can get more than just 5 points.

The expansion also contains the corrected version of one of the space tiles from the base game, which is nice. So you can get rid of the misprint and avoid confusion.

Plans & Ploys also adds a new civilization, the Aliens, which start with four space tiles that they can explore each income turn. That's really nice, because suddenly the space tiles are a more integral part of the game, rather than just something that you might be able to achieve at the end. It might be just one civilization that does this, but it's great to see.

The new landmark miniatures also look nice on the table, but my gripe with them is the same as for the base game. Using them to fill territory in your capitol city seems a bit of a waste and some of them don't quite fit, making it hard to place them correctly. That's not specific to the expansion though, so if you didn't mind it in the base game, it won't be a problem for you in the expansion either.

Landmarks play a bigger part in Plans & Ploys. There is a tapestry card that gives you a landmark, but there are also now blueprint cards, which are a completely new addition. At the beginning of the game, the players draft one blueprint card each. Each card comes with a landmark, which you can place in your capitol city at the end of your turn, if you achieved a certain goal. There is a good mix of these cards. Some require you to have the same type of income building in your city a certain number of times, others need you to complete a certain number of districts or rows and columns.

They all encourage you to fill your city and reward you with a landmark that allows you to fill your city even more. Suddenly, you pay more attention to your capitol city, which I think is nice. In the base game, the points you get from the city never seemed enough and not quite worth the effort, but now it feels like a viable strategy to win the game.

The expansion also comes with a cloth bag for the land hex tiles, round tokens that represent the landmarks you can get as you progress up the relevant achievement tracks on the main board, so that you can quickly see if a landmark is still available, as well as more automa cards, all of which are nice additions to round off what Tapestry has on offer.

There is one more gripe I have with Plans & Ploys though, but like with the landmarks, that gripe is also present in the base game. There are still a fair few edge cases where it's not clear how to interpret the rules. Some new factions have abilities that aren't clear or that can sometimes be confusing when applied to specific game states. Yes, Stonemaier Games has FAQs, but there just seem to be too many questions that aren't answered out of the box and require you to look them up online.

I know it's hard to playtest a game that has this many different civilizations, tapestry cards and other variables. It's not easy to find every edge case, but I can't help but feel that some of these questions should have been spotted before the game went into production. It leaves a bitter taste in your mouth when you have built your strategy on your interpretation of a vague edge case, and when you finally pull off this amazing feat, the rest of the group denies you it, because the FAQ explains it differently.

I know the rulebook for Tapestry, as well as Plans & Ploys, is intentionally short, to allow you to start playing very quickly, which is something I love, but in reality, it's too short and actually slows down the gameplay overall and even a first play of the game.

Despite my gripes, I still really enjoy playing Tapestry and now that I have the expansion, I would never play it without Plans & Ploys again. There are just so many little additions that give you a much more complete and interesting game experience. So, if you have played Tapestry a lot and really enjoy it, but feel there is maybe something lacking, then give Plans & Ploys try. You shouldn't be disappointed.

February 05, 2021
Rating
4.0
Tapestry: Plans & Ploys
If you have played Tapestry a lot and really enjoy it, but feel there is maybe something lacking, then give Plans & Ploys try. You shouldn't be disappointed.
O
oliverkinne Top 50 Reviewer 47 reviews