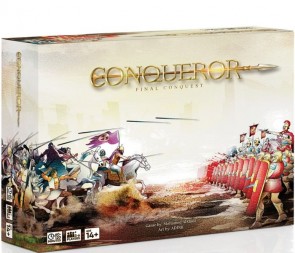 This release has been sitting it my “To Review” pile for way too long. I blame this on a number of reasons but the key one being: I was too optimistic about being about to get to the table with a sufficient number of players. My COVID bubble was hunkered down on Monnig Mountain over the holidays, and I had a theoretical six players I could get involved in play. I only managed that six player game once and, of course, that was my best experience with the game. I wanted to get a few more five and six player games in to see if it sustained that high fun factor before I sat down to review it but, alas, I've abandoned that hope.

Conqueror: Final Conquest feels like it was designed in a “Build your best possible game within these traditional parameters” universe. You need to take and hold strongholds, you need to have enough food to keep a army (collective groan from everyone at the table), you must be prepared for the card-induced (Chronicle Card) round randomness, and purchase hero cards for when you really need to tip the scales in your favor at key points in the game. Combat is handles via dice rolling (six-sided dice using only one through four). It is all mechanics and situations most players have seen before and, as such, it is like slipping into a well-worn shoe: It's comfortable.

Take, for instance, Cavalry. Cavalry count as two armies and are represented by the Horse meeple.
"Ahh, Cavalry....so they can move farther because they are on horseback?”
“No, they just count as two armies and they look like horses.”
“So, they get an advantage when taking on simple infantry?”
“No, they just look like horseys.”*mimes cavalry galloping*
“Are they more effective at flanking? The higher position and sheer mass of a warhorse...”
“No, they are just cute little ponies” * makes whinny sound * 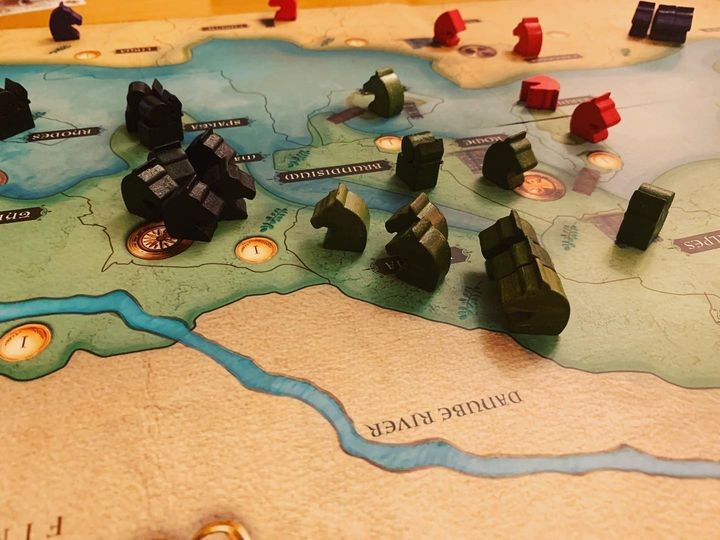 The ebb,flow, and friction of the game is held together by the layout of the maps. There is a three to four player side of the map and the Grand Campaign side of the map is for five to six players. Strongholds/forts are permanent fixtures on the maps and their placement (along with the requirement to hold five of them in order to win the game) guarantee they will be the focus of skirmishes. Waterways are treated as normal movement spaces, so no region is truly safe to turtle up. 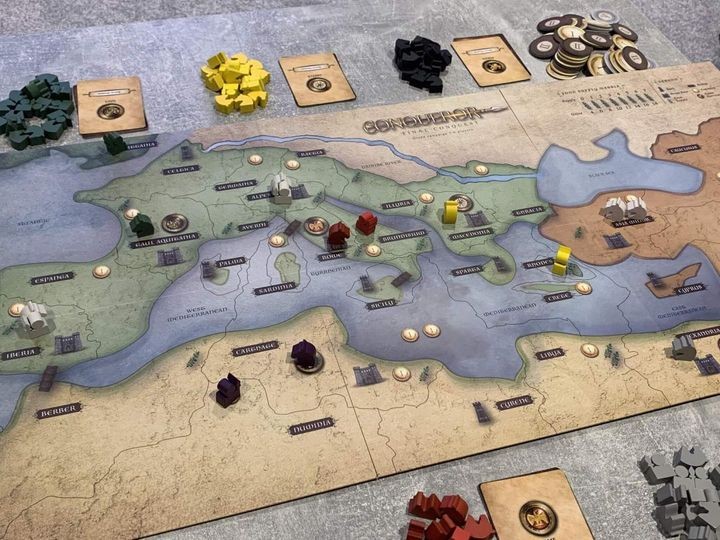 One thing this is NOT traditional about Conqueror : FC is the use of the sand timer. Turns are broken down into two sections: Planning and Action. At the beginning of the planning phase, you flip over the one minute timer and then Feed your troops, Purchase cards and Recruit new warriors. If you fail to accomplish the planning actions before the timer runs out, other players have a chance to sweep in and “bribe” the troops in one of that player's territories with coins, swapping out the legions located there with troops of their own. At first, I thought this was a horrible idea but what it requires is that everyone to be engaged and planning their turn ahead of time. In our later games, Bribing rarely came into play. But you know why? Because IT IS DOING IT'S JOB. It keeps the turns moving along and everyone focused. It removes the passive “guilt” of encouraging a player to watch the board state and plan before it is actively their turn because the timer is actually in the rules. Of course, you can simply choose not to play with the timer but what is adds, IMHO, vastly outweighs what it “takes away” and if someone does lose a key fort because of their lack of attention, it becomes one of those “Remember when...” moments that will live in board game group infamy. 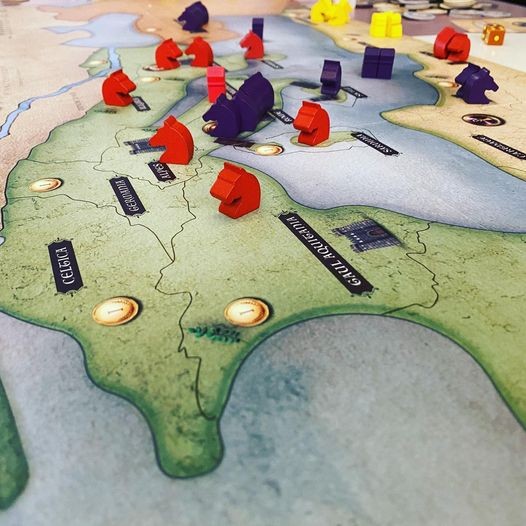 The buffer areas present at the beginning of the game are filled with white “neutral” troops that act as virtual speed bumps to expansion. In order to conquer these areas, you only have to have a superior force to overcome them, not engage them in actual combat. As you would expect, these are usually the first areas to be pillaged but also act as a gauge to the strength of your enemies. If that white buffer army is removed from the board, it brings into sharp focus that X country has an army of this strength moving toward you. 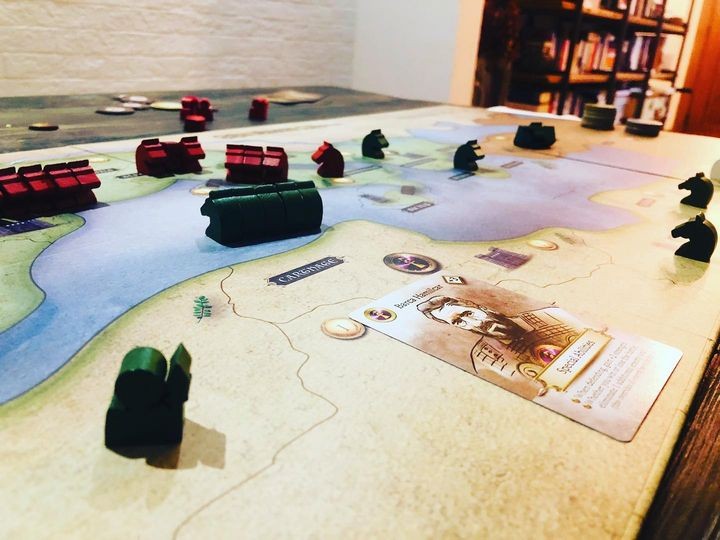 This is not Kemet. This is not Root. What it is is a much more accessible -dare I say- gateway type of experience. Conqueror:FC feels like, and this is not a slam against it, a refinement of Dudes on a Map games back before the term Dudes on the Map was even invented. (Are we still calling them Dudes? Is it people on a map now?).

I would also like to note that the designer has released a free expansion for the game that is a direct reaction to the COVID Pandemic called Conqueror Duels. This reduces the required player count to two-players. It puts you into various scenarios as either Carthage or Rome that take about thirty minutes to complete. It's not the optimum way to play the game but a very welcome addition in these, as they say, “trying times.”

February 06, 2021
Rating
4.0
Conqueror: Final Conquest
This is not Kemet. This is not Root. What it is is a much more accessible -dare I say- gateway type of experience. Conqueror:TC feels like, and this is not a slam against it, a refinement of Dudes on a Map games back before the term Dudes on the Map was even invented. (Are we still calling them Dudes? Is it people on a map now?).
W
WadeMonnig Top 10 Reviewer 195 reviews

Jackwraith replied the topic: #319071 10 Feb 2021 10:45
Hrm. I have the same reaction that I think most would: Shouldn't cavalry be moving faster and/or have some other attribute that's more important than just 2x strength? After all, that approach is kind of askew to the power of Greek/Macedonian phalanx tactics and/or Roman legionary tactics that used infantry as the centerpiece and cavalry as either harassers or precisely that "quick strike" aspect. I'm assuming this covers mostly the ancient world, since you mention Carthage.

Also, I see cards in one pic. Do they add anything or are they just clarifications of what the troops do?

WadeMonnig replied the topic: #319073 10 Feb 2021 10:57
The hero cards you can purchase with coins, generally giving you a one shot boost during a battle. There are also goal cards that reward coins if you achieve a country specific goal (coins are primarily used to purchase a hero or bribe armies if the timer runs out).
If you would like more information on this release or to purchase it directly from the publisher, you can find it at: www.conquerorfc.com/

Msample replied the topic: #319075 10 Feb 2021 11:55
Actually at this scale I can buy into cavalry not moving faster - they rarely operated as a stand alone force at this level. One thing that strikes me is that the map looks to have relatively few areas for six players. The sand timer is clever . Far too many people whine about being pushed to play faster - but time constraints add another friction point that may cause a player to make a mistake - you know, like their historical counterparts, without the perfect intelligence - were prone to make.

Msample wrote: Actually at this scale I can buy into cavalry not moving faster - they rarely operated as a stand alone force at this level. One thing that strikes me is that the map looks to have relatively few areas for six players.

I would have to double check to be sure but I believe the full map image I included is of the 3/4 player side, not the 5/6 player mega campaign side of the map.

jason10mm replied the topic: #319078 10 Feb 2021 13:02
Great review. Though i feel like the title "Conquorer:Final Conquest" runs afoul of that "you shall not use the word in the definition of the word" rule

So is this a Risk or Axis and Allies level DOAM game in complexity or higher? I LOVE the sand timer, does it also work to limit empire size because you run out of time just doing bureaurocratic logistical stuff, allowing opponents to pick off neglected units?

The hero art is hilarious(ly cheesey). Leonidas got some guns!!!

jason10mm wrote: Great review. Though i feel like the title "Conquorer:Final Conquest" runs afoul of that "you shall not use the word in the definition of the word" rule

My original title for this article was "Reviewer: a delayed review" as a little rib at the game title. I sort of gave them the benefit of the doubt since it is produced in UAE and is likely a translation issue.
You could say the game is a souped up risk but plenty of tweaks from the map layout to the custom dice make it a step or three more strategic.