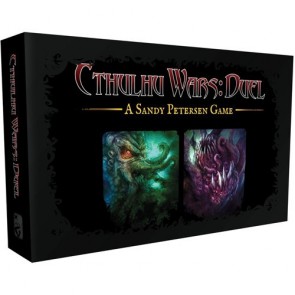 About mid-December of 2020, Petersen Games made a surprise announcement of Cthulhu Wars Duel. And, against what I would typically think of with a new game press release, it wasn't a notice about a upcoming Kickstarter that would be delivering in a couple of years. Instead, on the day the announcement went public, it was available for order from their webstore. This wasn't a pre-order, the game was actually in stock and ready for shipment. So, this atypical launch generated an atypical response from me: I send the link to my wife and said “You can stop looking for a Christmas Present for me, I want this.” I really didn't hold out any hope of it arriving by Christmas, but far be it from me not to reward Petersen Games for this new “It's ready, do you want it?”approach. After December 25th came and went, my wife sent them an email to check on the status of Duel and received a prompt response apologizing for the delay and actually giving us a refund on part of the shipping costs (Apparently, Petersen Games has been shipping mammoth boxes of plastic for so long, they didn't realize it wasn't that expensive to ship a small, light box). Anyway, enough with the backstory, much like the Lovecraft stories, the real fun began when the Old Ones actually arrived.

Cthulhu Wars Duel is an affordable, two-player version of Cthulhu Wars. Gone are the over-sized minis (maxis?) that, along with its staggering price tag, is what the game is most famous for. They are replaced with grotesquely beautiful standees and a modest price point, respectively. 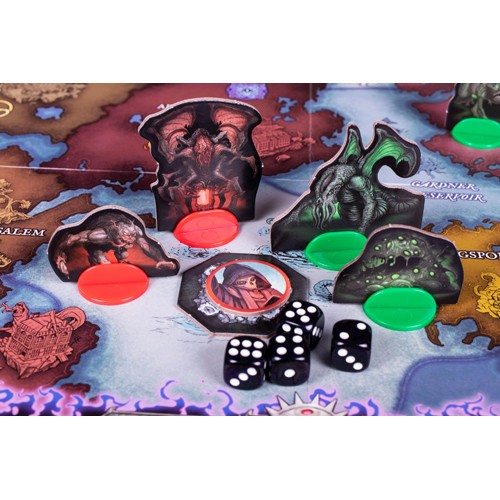 The changes to the traditional Cthulhu Wars ruleset are small but impactful. Leaning into the Wars aspect, Doom (the victory points of CW) is mostly earned from kills against an opponent and based upon how many power points were used to summon the defeated foe. The real nod to the two-player dueling aspect is something called Decay. Once a player has reached Zero Power Points, when their turn would occur, they (instead) move up the Decay meter. This represents how many extra power points the player with power remaining must spend to take an action. Where a player would typically be apprehensive about spending all of their power to summon an Old One, now it can actually be used as a tactic to force your opponent's hand, making them break from a strategy in order to not lose too many power points by making a number of smaller moves instead pointing them toward larger, costlier ones. Also, the requirement of having all six spell books in order to win the game has been removed, so now it is just a rush to 30 doom. This ain't a game, it's a goddamn arms (tentacle?) race.

The map in Duels is awesome. It is the eastern seaboard of North Ameica where most of Lovecraft's stories were set, so you will by vying for control of Arkham, Kingsport, and Dunwich. (A head's up to Petersen Games: One of the expansions/other versions of Duels for this should include a map of England with Crouch End and The Rookery of St. Giles, for the Stephen King and Neil Gaiman fans). 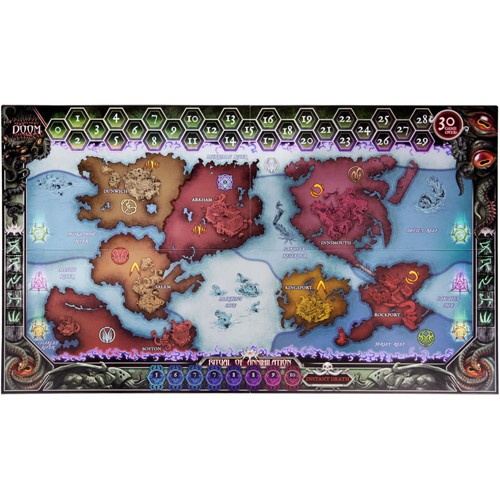 The biggest question for me was how Duel was going to handle/balance the asymmetrical factions. With only two factions in the melee, that balance is key to delivering a quality experience. The Great Cthulhu is “easy” faction to play: it is simply more straightforward. This is very much like in the Original CW. Black Goat, on the other hand, has a more nuanced style and, against what you would probably think, players experienced with playing BG in the original game might have a difficult time adjusting.

My main opponent in Duel had only played the original CW two or three times and never as Black Goat. Against almost every instinct inside me, I managed to keep my mouth shut instead of giving out my “advice” on how to play them. This led to them running strategies that were counter to what I would have suggested...and what my opponent did fit Duel in a much better way. I don't want to go over every power of both factions, so I'll focus on how playing Black Goat has "evolved" with Duels.  For instance, Ghroth (an action that allows you to roll a dice and if the result is equal or less than the number of Fungi (a monster type of the BG faction) on the board, you eliminate that number of the opposing cultist), became one of the go-to actions for them. (Where, in my experience with the original CW, this action was rarely used). This is not only because of the devastating impact it can have on Cthulhu's forces (eliminating up to four cultists) even if it FAILS, you get to add one of your cultist to the map. With only a single faction to focus on, this can work to keep the opposing player back on thier heels without the fear that another player will sense thier weakness and attack them.  The Fertility Cult power now isn't just used to summon a hoard of monsters in a single action for pure offense. Instead, you can use it to avoid the Decay power point “penalty” I mentioned earlier. Again, with only one opponent to focus on, battles where you use Necrophagy (that allows you to move opponents from a battle area via “pain”) can clear an area for easy snatching of gates without fear of someone beating you to the punch.  And, of course, Thousand Young offers a Power Point discount for all summoned monsters, so it's as cool as it has always been. All this being said, my totally unscientific total after switching between the two factions with different players, is that Clan Cthulhu has been winning about sixty to seventy percent of the games. I'm not sure if it is indicative of an overpowered great green one but if you are worried about it, I would err on the side of caution and give the less experienced player Cthulhu to begin with. I will say I never felt at a disadvantage when playing as Black Goat, I just felt it took a different “touch” to win.

The game comes with ten(!) 12mm Black Dice. Anyone with a passing knowledge of Cthulhu Wars will immediately see the problem with that sentence. Sure, maybe ten dice is enough if one person rolls combat and then the other person picks up those same dice and roll their combat. If I recall correctly, Cthulhu Wars came with twenty dice, so I have no idea why they opted to half that for this release. So, one of the first things I did was go out and buy a Chessex set of 24 12mm red marbled dice with green dots. #1- Yes, I realize that I am part of the problem. #2- Red for Black Goat (which sounds like an Oxymoron but isn't) and Green for Cthulhu. #3- Fuck 12mm dice. They don't have that chunky roll feeling.

Yes, plenty of what makes the original CW so damn great is missing in a two-player game. If you aren't keeping your opponent in check, no one is. There is no “laying low” or biding your time. But look at the size of this box! I could (epidemic allowing) pick this up and put it into a bag with other actual games and take it to game night. I'm tempted to call it a tiny epic Cthulhu Wars sampler except that would be disservice to the way the CW ruleset has been modified to make it a great two-player experience. In fact, once you know the system, the games usually take less than 45 minutes which means this could be, gasp, a “Filler!” 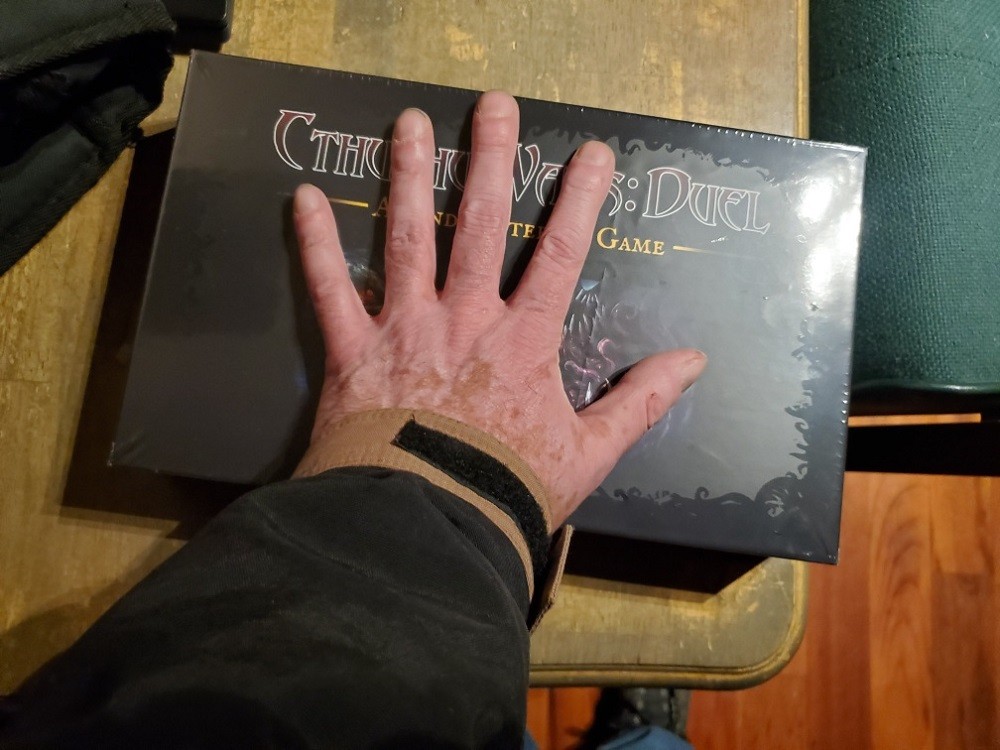 With a MSRP of $30.00 and hovering around $25.00 at online discount stores, I'd have no problem picking up subsequent releases. Two new factions, a new map, and it comes in at a cost that is less than typical expansions? Yea, sign me up. (Again, I'm part of the problem). Of course, Petersen Games does it's typical FOMO subliminal marketing by mentioning all the other factions that will eventually be able to played with Duels and how some rules will be adjusted specifically for them.

If you have been waiting for a chance to see what is so good about Cthulhu Wars, CW Duels eliminates the price barrier and provides plenty of portable punch for a pair of players. Or, as that weird dude who started appearing in my dreams after I started playing Cthulhu Wars said “Never were things of such size before, and they held strange colours that could not be put into any words.”

February 06, 2021
Rating
4.5
Cthulhu Wars Duel
Never were things of such size before, and they held strange colours that could not be put into any words.
W
WadeMonnig Top 10 Reviewer 195 reviews

siberianhusky replied the topic: #319308 18 Feb 2021 08:54
I have hope they will apply this format for the full game.
I've found that my games without minis are played much more frequently than the games with ones.
Read More...