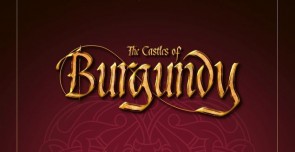 The Castles of Burgundy was released way back, in 2011, and originally had the much more pleasing title Die Burgen Von Burgund. Wordplay aside, Stefan Feld’s most famous game made its way to our shores shortly after, and was a smash hit. That’s all well and good, but why am I reviewing it now, ten years later?

A couple of years ago the publisher, Alea, and Stefan got their heads together and decided to revamp the game. They gave it a fresh lick of paint, bundled in the seven mini-expansions that got released after the original’s release, threw in another one, and that’s what I’m looking at here, the Anniversary Edition.

Why am I covering it now?

Expectations these days are high. When people tear the shrink off of a new game, they’re expecting high-quality components, deep, interwoven mechanics, custom meeples, legacy envelopes, and all that jazz. So if you’re new to the hobby and you open Castles and see a few dice, a small board, thin player mats, and vast supply of tiny cardboard hexes, you could be forgiven for feeling underwhelmed. If a game is good though, it doesn’t matter, right? That begs the question: is The Castles of Burgundy still good?

Have the games that have come since improved and refined the core mechanics and made something similar, but better? Should I still buy this game in 2021?

Yes. Yes you should

The Castles of Burgundy is a classic for a reason. And yes, it is a classic, it must be, it says so in the rule book.

Admittedly, it does look dated on the table now, even with the colourful redesign, but the game is still so good, and so much fun to play. I’ve taught this to non-gamers and fans of heavy games alike, and everyone has picked it up quickly, been able to employ some kind of strategy, and had a good time filling their little board with tiles. 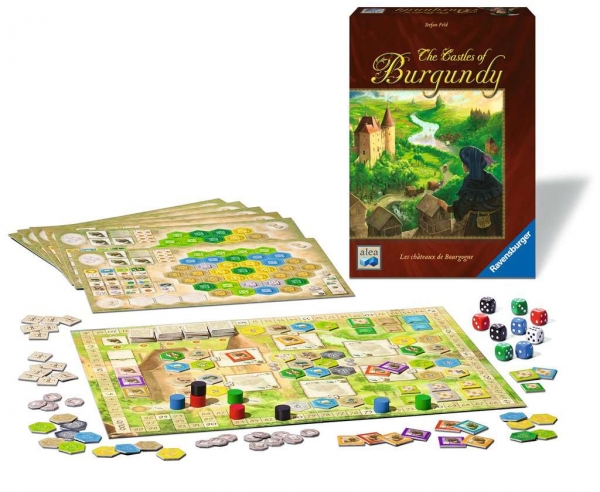 What makes it so special?

At its core, Castles of Burgundy is very simple. You roll a couple of dice, then either pick up a hex tile from the area matching one of the numbers rolled, or lay a previously claimed one onto your board, into a space with a matching number. The bigger the area you manage to fill, the more points you score. For the first half of the game you’ll find yourself concentrating on your own little kingdom, planning out what you’re going to build, and where.

As the game gets going though, and score markers start advancing around the board, you start to get aware of what the other players are doing on their boards. In part, because they’re taking tiles you had your heart set on, but also because you can start to play more tactically. Maybe taking that pasture full of cows denies them that amazing giant pasture that would have scored them 20 points, or maybe claiming a boat you can’t possibly use, just to make sure you stay ahead in turn order. Choices, choices.

In my opinion, nothing has nailed the medium-weight tile placement Euro game better than Castles of Burgundy, even now. The combination of simple turns (rolling two dice and taking two actions), and the strategic gameplay that emerges more with every play, make it a fantastic gateway game. I can teach this to new players and watch them enjoy building their board, while I work at more involved strategies, and the scores still don’t look like there’s a runaway winner. It works at all levels of experience. 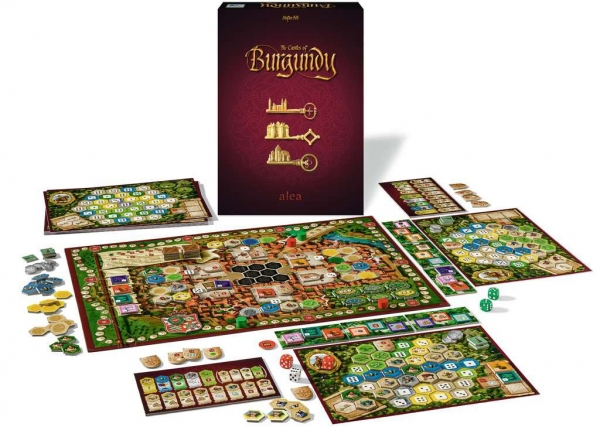 My only criticisms really are the same as in the original version. The iconography on some of the tiles is a) tiny, and b) hard to decipher. Sure, once you’ve played it a few times, there’s no problem, and they’ve made a huge improvement by adding player aids which explain them better. For those first few games though, keep the rule book to one side to refer to it.

The other thing is organising the tiles. If you don’t add some opaque bags to draw tiles from, you need to create face-down stacks of each colour before the game starts. Not the end of the world, but a small annoyance.

There’s a lot of game in the box. The expansions really are mini-expansions that only change small things in the core game, but they do add new hexes and mechanics. There are also so many double-sided player boards in the box that it’s impossible to create a strategy that would cover all of them. I’ve owned the original since it was released, and I still play it, and I still enjoy every game, regardless of it being two, three or four players.

Before I finish, it’s worth mentioning that there are two (count ’em) new ways to play The Castles of Burgundy now. First up, there’s a Team mode, where two player boards are joined together to make a huge Duchy to fill up. I’ve not had a chance to play that way yet, thanks to our friend Covid, but I can see how it’ll be good fun.

Secondly, and probably more importantly in our lockdown lives at the moment, there’s a solo mode. It’s not an automa-style game versus an AI player. Instead it’s a puzzle, trying to fill the specially-designed boards within the 25 turns you get in the game. It’s a really fun, engaging puzzle, far more entertaining and worth playing that some of the beat-your-own-score variants I’ve played. It’s tough though, I still haven’t completed it.

The Castles of Burgundy really is a classic, and it’s excellent. Stefan Feld’s designs are usually brilliant, and this is no exception. It’s one of his lightest games, in terms of complexity, but I think it’s his most fun. I still love it, ten years on, so much so that I’m going to keep this and the original in my collection. This isn’t the view of someone with rose-tinted spectacles who misses the simpler, pre-Kickstarter days of board games. This is the view of someone who enjoys good games, and knows one when he plays one. In my opinion, nobody has taken the core mechanics of this game, and bettered it.

There are a lot of lesser games you could be spending your £40 on, so if you’re after a bona fide classic that’ll keep hitting your table, I highly recommend The Castles of Burgundy.

Review copy provided by Ravensburger Games. Thoughts and opinions are my own.

February 16, 2021
Rating
5.0
The Castles of Burgundy
Stefan Feld’s designs are usually brilliant, and this is no exception.
AR
Adam Richards

Ah_Pook replied the topic: #319241 16 Feb 2021 11:24
I got the solo boards for the original version and think it's a really nice solo game as well. I've beaten it twice on the easier side, and both times I beat it on the last action of the final turn.

My only real issue with COB is I think it's worse the more players you add in. Play time scales linearly with player count, and the 4p game lasts wayyyy too long and doesn't add much in terms of fun over the 2p game. It's a great 1-2p game though for sure. It's got those good combo turns that are fun to spot and execute.

I've got basically everything for the original version, so I didn't really look at the new version. Didn't it have some weird stuff where it didn't actually have everything that has been released for the game in it or am I misremembering that.

I agree, and I think it's oddly reassuring that he can do it with the lighter games as well as the brain-melters like Bonfire and Trajan.

Ah_Pook wrote: Didn't it have some weird stuff where it didn't actually have everything that has been released for the game in it or am I misremembering that.

That may be the case, I didn't get any of the expansions or add-ons for the original. It was a strange thing, there was never a full-on expansion in the way that some games get, just loads of smaller bits that got added. I found it hard to keep track of.

Ah_Pook replied the topic: #319245 16 Feb 2021 11:42
Yea the mini expansions were pretty annoying all around. I really like the Trade Routes one, most of the others are... I mean they're fine? A few more tiles to throw into bags, eh. All the nhe new boards were also solid additions, thinking about it.

I have no comment on CoB, but enjoyed reading your review.

DukeofChutney replied the topic: #319256 16 Feb 2021 16:02
The only Feld i've played. I do think it is dry and abstract, but it is also pretty good. Feld excels at hiding you from the harsh realities of your poor performance at the game.

How important are animal monocultures to winning? A question for those who have played a lot more than I.

DukeofChutney wrote: The only Feld i've played. I do think it is dry and abstract, but it is also pretty good. Feld excels at hiding you from the harsh realities of your poor performance at the game.

How important are animal monocultures to winning? A question for those who have played a lot more than I.

its a game about scoring marginally more points on given actions than everyone else, as you are all scoring points constantly for doing the things you do in the game. good animal pastures are one way to maximize your points, sure.

DukeofChutney wrote: How important are animal monocultures to winning?

Whoa! Animal monocultures? I gotta give this one a try!

jpat replied the topic: #319278 17 Feb 2021 13:04
I kind of wish I'd gotten the anniversary ed, but I'd heard (as noted in the review) ambivalent reactions and was able to get the original in trade. Maybe if we somehow (as unlikely as it seems these days) play it out, I'll look at the anniversary edition again.

BGG has a nice set of custom drawstring bags for not too much. IIRC, you have to order two things: a set of bags and then another single bag, for some reason. I'm assuming there was some oversight on the first production.

Ah_Pook replied the topic: #319289 17 Feb 2021 16:48
the base game is enough. if you are feelin fancy you can grab the trade routes expansion off the bgg store, as i think buffing selling goods is a solid change to the base game. beyond that the only thing i would really strongly recommend is PNPing the championship boards, as i dont think they ever got released for sale. theyre a really nice and balanced set of maps, and its easy to PNP them.
Read More...