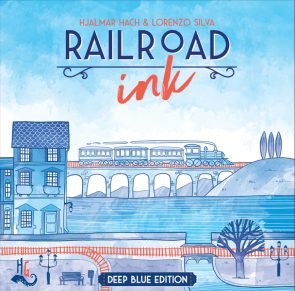 Roll and write games are like junk food. Easy to pick up, easy to consume, and easy to forget about afterwards. So, like everyone else, we've been through our fair share of them then pushed them to the back of the cupboard. And, despite all the critical acclaim, I presumed Railroad Ink: Deep Blue would be another course to bolt down at speed, except perhaps a little bit more fun while it lasted.

The cool blues of the magnetic closure box hide some dice, some markers and some wipe-clean player boards. All very elegant in both presentation and rules. You roll the four dice getting a mix of road and rail sides. Then you have to mark all four of them on your board, connecting to existing paths of a matching type. The goal is to connect as many of the eight printed endpoints into as few grids as possible. Oh, and leave as few unused ends as you can.

So get rolling with the solo mode where you play for a high score. I draw a rail to connect to a rail, a road to connect to a road and so on. It's fun to doodle on the board and tougher than you might think to draw a good looking road. Next turn an underpass gets rolled, which is a pain. Its a road section with a rail running underneath. Four ugly endpoints, hard to fit into the network. Never mind, let's keep rolling.

As the spider scrawl builds up on my board, it gets harder and harder to keep the endpoints together. One turn I end up using three dice to connect two endpoints in a closed track, just to keep from more going-nowhere ends. There are bonus points for the longest road, rail, and using central squares. So I aim for them instead.

At game end, I check the scoring cards and compare the paltry point-per-square bonuses to the endpoint scores which go up in fours. And I realise I've made a mistake. After deducting the penalties for all the unused routes, I get some paltry score which is too embarrassing to report. Next time, I'll have to try and get some more connected up.

Next time turns out to be with the family. It's so fast to teach and play that it makes a great game across the ages. Still, with my one failed attempt under my belt, I figure I'll do well. As the dice come up, always with the exact faces you don't want and none that you need, I try harder to join the dots. There are also six special four-way junctions you can draw in if you want, although they risk a lot of unused ends. But I try to work a couple in this time to wire routes together.

It's a much better score. But to my astonishment, it's half what my teenage daughter has managed. Looking at her card in fascination, I can see what she's tried to do. She's managed to find a strategy, quite a clever one, for what I'd thought was a tactical game.

This demands a rematch. Two games in, and it feels like rather than running out of road, Railroad Ink is steaming into new possibilities to explore.

Third time lucky, I try to do what she did last game. It's harder than it looks, with the dice thwarting you at every turn. I find myself waiting with a surprising amount of excitement to see what they'll turn up each roll. I glance up and see the family frozen in expressions of silent concentration as they scribble away. And when we rack up the points, my daughter hasn't replicated her feat from the previous game. I have done better, but not well enough to beat her.

It's a strategy, but it's not game-breaking.

Railroad Ink: Deep Blue Edition comes with two pairs of expansion dice that add rivers and lakes. You can't mix them, so we try rivers first. Winding a river around my transport topology proves a fun challenge. And since drawing river faces is optional, there's a nice element of risk for extra points, too. I don't fancy it, and close mine off after a mere four squares. In focusing on keeping road, river and rail together, though, I've neglected to weave in many endpoints. It looks nice, but it's an average score.

For a game made with four or six dice, there's an astonishing amount of different things to try and keep track of.

Lakes are next. These serve as a universal transport link: if you roll a face that connects a lakeside to a road or rail you can work it into your network. I’m not prepared for how much this small change impacts the game because you don’t have to connect lakes to your existing network. You’re a lot freer, again, to take risks and hope the dice come up in your favour. I try to make my lake in the central squares to get the extra bonus and it pays off. But with both variants, it’s not clear if you can compare your score with one from the base game alone, which is a shame.

Every time I’ve played Railroad Ink it’s been a lot more fun and a much greater challenge than I’d imagined. My boards are grimy with smears of dry-wipe marker, a testament as to why this is seen as a cut above its peers. But every time I’ve played Railroad Ink, it’s also been in silence bar the occasional exclamation of annoyance when the dice fall wrong. Despite its speed, this is no junk food for your gaming appetite. But it is a little like eating a gourmet meal alone in a cool blue cafe, with nothing but your own logic for company.