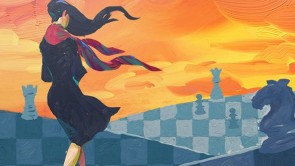 Ask any number of artists about the process of oil painting and chances are the importance of layering will swiftly arise. Many will regale you with tales of the moment that a painting either leaps into focus or becomes irretrievably lost with the addition of a single stroke.

Similarly, the tactile nature of oil on canvas is a critical element often overlooked- as brush strokes, impasto, viscosity of materials and myriad other factors conspire to belie the concept of art on canvas as a two-dimensional exercise.

And while the mechanical precision necessitated by game design places a yawning gulf between the mindset of mediums – with Canvas, Road to Infamy Games have managed to craft a similarly creative endeavour that focusses on both layering and tactile delights to capture the act of composition and its inherent joys, whilst fastening it to the competitive structure that gaming often demands. A difficult tightrope to tread, the deftness with which it has been deployed here is testament to the merits of this frankly beautiful game.

Board games are an inherently visual and tactile medium. They foster a connection with components and seek to create an experience that obscures the automata that powers their innards with a thematic dressing that sells the experience. This is the first area in which Canvas excels. From its sturdy tokens and cloth mat to its gorgeously wistful box art and especially its central gameplay conceit, it positively shines amidst other more skulls-n-blood-drenched fare on my shelves. It invites you to open the box and play, truly play in a way few other titles I’ve experienced of late can offer. 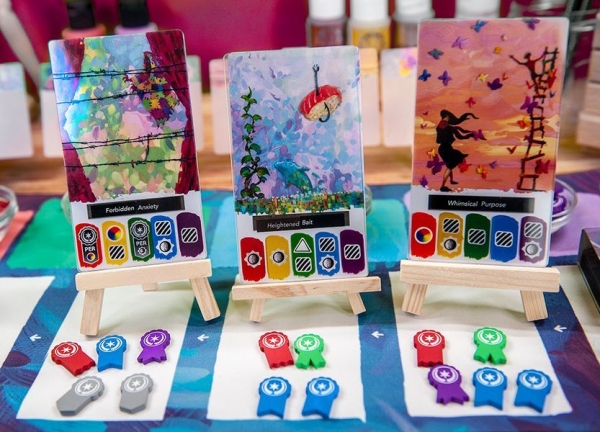 Grasping the easel, 1-5 players/artists will seek to create a series of three masterworks that are then scored based upon their mastery of a range of techniques. To do so, they will be selecting from a series of transparent layers, laid out in flux like the card market in many drafting games, each redolent with both a segment of art, a portion of a title and a series of symbols denoting either Hue, Shape, Texture or Tone. The compositional requirements of each game will be dealt at random from a generous selection of cards that outline concepts to be harnessed such as Variety, Repetition, Emphasis, Proximity, Proportion and Hierarchy. Each require a different set of parameters to be met in your selection of symbols in order to net ribbons, the currency which your aesthetic will be rewarded.

On each turn, players may choose to either select a layer card or a create a painting. Each painting must consist of three layers and no player can hold more than 5 layers at any one time. This necessitates pragmatism and forms the core of the puzzle that powers the game.  Layers to the left of the market are free, with each step to the right costing players a point of ‘inspiration’ which then remains on every card passed over, marking them a more and more attractive proposition as the turns tick over. 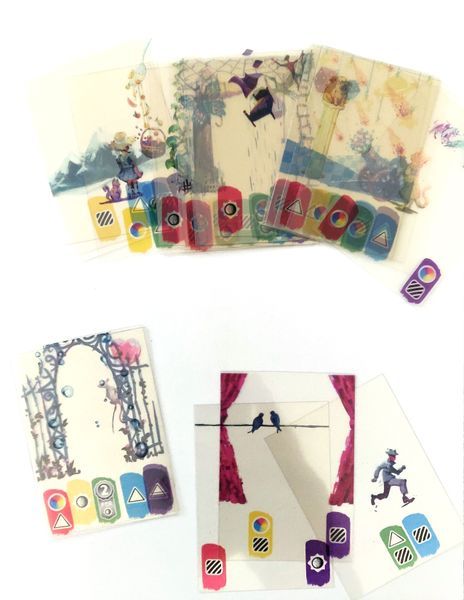 It is in the art of composing your creations that the game truly shines. Do you add the card that will reward your proportions even as it obscures your clarity? Do you go for a variety of techniques or double down on the one, mastering it to unlock the rewards of a staggered scoring system? Will the card you need to complete your masterpiece fall from the deck next turn or do you commit to your imperfect design, knowing in your heart of hearts that no work of art is ever truly completed, only abandoned?

Or do you merely align the cards that spark the most aesthetic resonance within you? The ones that form the snappiest or most profound title? There is a layer of enjoyment to be found here that transcends even the scoring and mechanics of the game as you simply ‘play’ with the hundreds of possibilities on offer. This duality and commitment to the creative endeavour is where Canvas most brilliantly commits to its theme. Equally effective as both a puzzle to be knotted out and an exercise in freeform creativity, occasionally it straddles both in a single act of layering that propels matters into the realms of the near-transcendent. And did I mention that it’s beautiful?

Illustrator Luan Huynh has done a remarkable job in creating a series of vignettes that not only work individually but which you can layer in a multitude of arrangements to extract form, function and meaning. 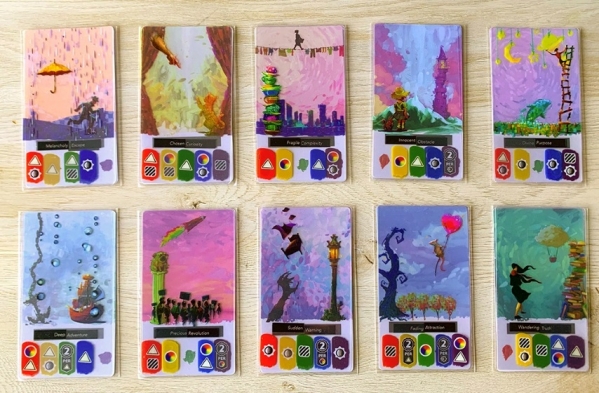 It’s especially fun if as a group you commit to displaying and interpreting your piece for the table once it has been completed, tilting your imaginary beret and stroking your goatee as you strive to harness the most pretentious corners of your lexicon in describing why the blackened claw is reaching for a bowl of fruit in your new movement ‘Tarnished Illusion’, why it represents your mother and how you don’t think it affected you.

This kind of banter can help to break up what is probably the games major shortcoming too, in that even with a complement of five it is wont to be a somewhat solitary affair as players focus on their individual hands, arranging and rearranging layers in an almost trancelike state of both head-scratching obsession and detached artists reverie.

Player interaction really only consists of muddying someone else’s palette by depriving them of the card they needed to truly complete their mould-shattering new piece ‘Ominous Anxiety’ and even then it’s likely to be an accidental effort that may just as easily have revealed the perfect denouement for their three part study in “Improbable Nature”, catapulting them into the bosom of the elite as critics fawn over their insight.

But even as they feast on patronage and caviar while you return dejected to your bedsit studio, another game is only moments away, as the set-up, rules explanation and playtime are all mercifully swift, even if liable to be derailed by the analysis paralysis of more fastidious brush wielders. 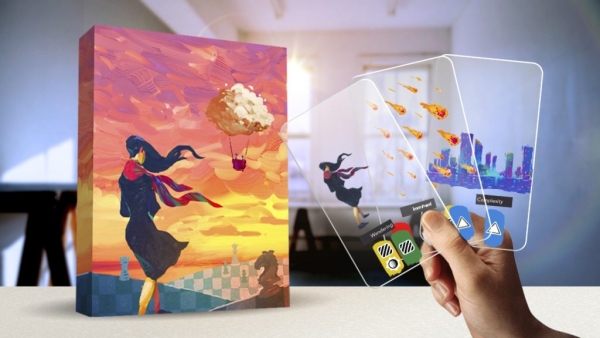 To further belabour the ‘layering’ metaphor- it should be obvious by now that Canvas is a game that succeeds on many layers. It can be interacted with as a puzzle in efficiency, an exercise in pure creative play, or even a seed for storytelling. Not only that but its near universal appeal means it can be equally enjoyed by a group of hardened gamer types as well as your children, your nan or your guidance counsellor (as you explain to them the cathartic shades of your new piece ‘Fragile Revolution’ and how it underscores the perils of consumer capitalism).

Much like the appreciation of any work of art, how you engage with it is up to you, and it is in this gift of agency that Canvas truly becomes one with its subject matter.

I'm collecting quite a list of these now, two added this week - Canvas, Thousand Year Old Vampire, Blitz Bowl, Cobble and Fog. At some point it's going to be worth my while trying to find someone to buy them all and ship them in one box

Matt Thrower wrote: Really like the sound of this, thanks for the review. But it's US only.

I'm collecting quite a list of these now, two added this week - Canvas, Thousand Year Old Vampire, Blitz Bowl, Cobble and Fog. At some point it's going to be worth my while trying to find someone to buy them all and ship them in one box

It's really something and there's nothing else quite like it in my collection. My copy was via the kickstarter (also how I got TYOV) and for a 'kickstarter game' to not stress me out with its corpulence is a victory in itself. I think it's a supremely clever and self-assured little experience and it's proven a welcome palate-cleanser after recent sessions of Brass: Birmingham (a game I think I loathe but can't stop thinking about).

I bit the bullet on an import Blitz Bowl but it hasn't seen much play, Cobble and Fog is on the radar too. Australia always gets the shaft on stuff like that.
Read More...