Play Matt - Back to the Future: Dice Through Time Review 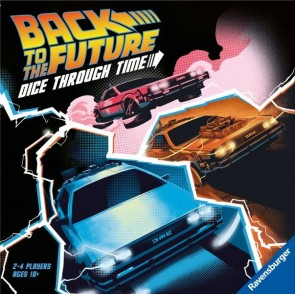 Game Name
Back to the Future: Dice Through Time
Publisher
Ravensburger
Designer
Prospero Hall
Players
2 - 4
There Will Be Games

Back to the Future is that rarest of fish, a beloved nerd franchise that’s under-gamed. Enter Back to the Future: Dice Through Time, a co-operative romp where players work together to locate out of time items and return them to the proper place. Each player has their own time machine which can swap between the four time zones on the board. Franchise fans will spot an immediate problem here: in the original, there was only one DeLorean.

Still, it’s a good excuse to saddle up and go joyriding to help Marty, Doc and your other favourite characters. Each zone in Back to the Future: Dice Through Time has it’s own Biff standee for the villain of the series, who moves about at the whim of the cards and blocks whatever space he’s in. This is an action dice game where you roll four custom dice and take actions like moving between spaces or time zones depending on what faces come up.

You can also spend faces to complete events if you’re in the same time and place as one of these randomly-drawn cards. Completing one earns you an item, which you then have to take back to its correct year and location. Clear all the items - the number varies depending on your chosen difficulty - and you win the game.

Combining random events and random dice pumps plenty of excitement into the game. On rare occasions, you can be stuck without much to do, but most of the time it’s a fun challenge to work out what’s best to do with what you’ve rolled. The chance to spend two matching faces as any one other face, plus a token system, gives needed flexibility and depth to strategy. And even when you’re working well together, the game can run away from you with surprising speed.

So far, though, it’s still very much a standard co-operative setup. Unlike a lot of games of this kind, though, there’s only one way to lose. Leaving unresolved events on the board advances a track that will end the game in a sorry loss. Leaving too many for too long, or disrupting space-time by meeting other players, causes it to advance even faster.

That small change isn’t enough to make Back to the Future: Dice Through Time stand out in its crowded genre. It also suffers from the standard family co-op problem of lack of being susceptible to hijacking by a bossy player. Like Doc Brown, however, the game has a little invention up its sleeve to help make things more interesting. 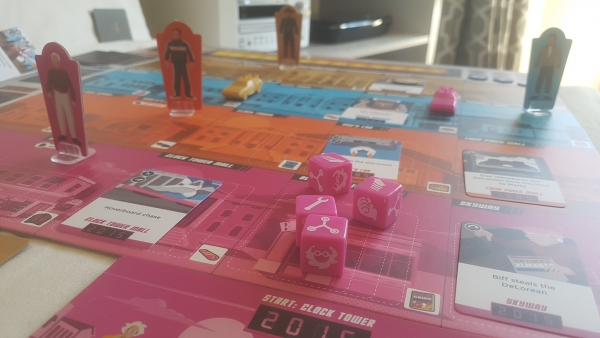 Instead of spending a die, players can choose to leave one on the board. This is called “rippling” through time and allows another player in the same location but a different time to spend it on your behalf. Using this ability lets you co-ordinate to make a strategic plan for the unfolding turn. But it’s risky: the die stays there until spent, so if you have to change plans due to unforeseen events, its owner will be an action die down.

Rippling is the standout mechanic that stops this just being another whack-a-mole exercise. That combination of extra depth with extra risk brings the needed frisson to the game to keep it both engaging and exciting. You rarely feel like you’re out of options, or playing against a loaded deck. And yet there’s always the chance for the timelines to spiral out of control with terrifying speed.

What doesn’t work so well, though, is the licence itself. It doesn’t matter that the game describes leaving a dice on the board as a time ripple. Nor that it calls the tokens added for multiple events paradox tokens. Nor that the brief text on the event cards mirrors scenes from the movies. At no point does Dice Through Time ever feel like a time travel game, let alone a Back to the Future game. It feels like what it is: a lightweight exercise in pulling mechanical levers with a few fresh elements to enjoy.

So while Dice Through Time offers plenty of fun time, it’s lacking the elements to make it more worthwhile than genre staples like Pandemic. Without the thematic hooks of Marty McFly and friends, it’s just a newer spin on quite a tired formula. If you have a particular penchant for family weight co-ops then there’s enough novelty here to make it worth your time. The rest of us remain waiting in time for a definitive treatment of this beloved franchise.

March 08, 2021
Rating
3.0
Back to the Future: Dice Through Time
A solid co-operative game with some innovative mechanics that don't quite manage to break the genre mould or tie the theme together.
MT
Matt Thrower #1 Reviewer 286 reviews