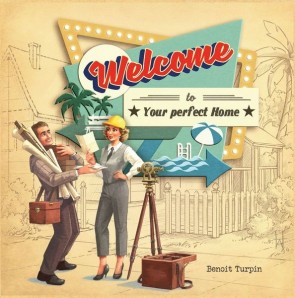 Game Name
Welcome To...
Designer
Benoit Turpin
Players
1 - 100
There Will Be Games

Welcome To... my local gaming club. Remember them? Communal spaces in which people could gather and play games face to face. Ours is in a refurbished social club, bright lights overhead, laminate flooring underneath. Tables set up in rows like benches of benediction before the bar. Waiting only for gamers to fill them with life and chatter and excitement.

Welcome To... my elder daughter who is coming to the gaming club for the first time. We don’t know it now but there will be few more opportunities for her to join in before everything shuts down. Welcome To... is the game we’re going to be playing, a flip and write game where we’re competing town planners. Not the most inspiring theme but the owner has laminated score sheets and provided dry-wipe markers, which is a nice touch.

Welcome To... the rules, which are not as welcome as I’d hoped. The basis is very slick: you flip over three cards on the front of which are numbers, exposing the backs of three more cards that show actions. You choose a number to assign to a house on one of your three streets, which must be in ascending, but not sequential, order. Then you take the corresponding action.

The trouble is that while the actions aren’t complex, they don’t follow a strict pattern. A pool action lets you add one to a house only if it has space and only if it’s the house you’re numbering. A park action lets you add a park to the street where you’re numbering a house. A fence action, meanwhile, lets you draw a line between two houses on any street at all. Parks, pools, fences and more besides all contribute toward end-game scoring.

Still, after a few turns, most become second nature. Those early turns are straightforward. You write low numbers at one end, high at the other, middle ones in the middle. You choose actions that you can be sure will boost your score. Parks and pools, for instance, help you cross off boxes toward a higher score. The agency action, meanwhile, lets you change the number on the card with a possible score bonus at the end so it’s not useful early on. 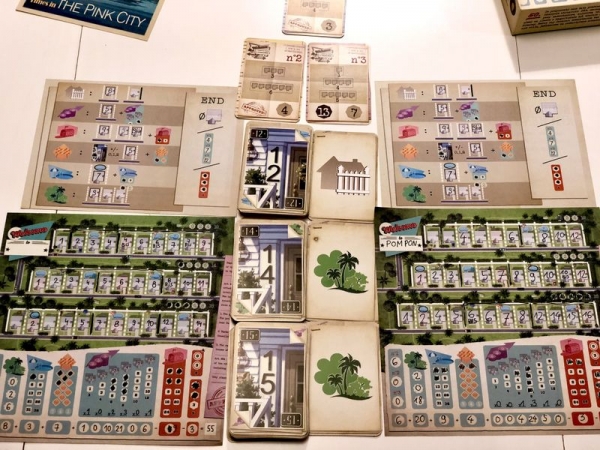 As the game goes on, though, things get tighter. Once you start getting runs of numbers your choices become more limited and more difficult. Options like the agency or “bis” which lets you repeat a number for a small score penalty become more useful. Your scoresheet looks more and more of a mess. We’re racing to be first to complete one of three town plans - fenced runs of numbers of particular sizes - for a fat score bonus and the prize is getting closer.

Each card flip is watched eagerly, the group maintaining a buzz of excitement punctured by the odd groan as fortunes are thwarted. But each head is down over its own scoresheet, focused on the pleasant puzzle at hand. I glance up at the box which lists one to a hundred players. For a moment that seems a stupid boast, before I remember how Bingo works. All you’d need is a projector and a lot of pencils and a thousand people could play Welcome To... together.

When the end comes, it feels like being forced off a project. Those unfinished pools! The gaps in the numbering! But, dutifully, we all get our heads down again and tot up our scores. It’s satisfyingly close. That feeling that if you’d just swapped a couple of numbers round, it could have been you instead. It’s a great opener for my daughter’s first, last, game club. Later, we’ll play Arboretum and The Grizzled, but it’s Welcome To... that stays with us.

Fast forward a year trapped in my very own Welcome To... scoresheet. Three streets and a park, but sadly no pool. Roll and write games come and go, a brief distraction from these four walls. So when a new edition of Welcome To... pops up, complete with a new automated opponent solo mode, it feels like coming home.

First, I try to solo it the old-fashioned way. There’s a digital scoresheet to try on my phone, bright and smooth and convenient under my fingers. Despite the passage of time, the rules need little more than a brief refresh. Solo, you draw three cards at a time and choose a pair to use, one for the number and one for the action. Like any good engineering project, it comes together with a mix of planning, triumph and moments of cursing my lack of foresight. A respectable score.

Next, I try the new solo mode. The setup is the same: draw three, choose two, discard one. Except that now, the one you discard can score points for the AI opponent you’ve picked from a selection. I start with AI level three, which scores nothing for parks and one for fences. This pushes a new level into each turn’s decisions. I want to give them lots of parks and fences but that doesn’t always chime with how I want to use the cards. It’s like juggling and, from time to time, someone throws you an unexpected extra ball.

Despite my care, the AI kicks my ass. But, weirdly, this new solo mode has the teeth that the multiplayer game lacks. Beaten at level three, I start over at one and eke out my win for a crumb of self-comfort. The other levels look at me, taunting. There will be time to face down their mockery later.

For now, it’s time to welcome my family to Welcome To... As with most games beloved of gamers, the initial skim over the rules makes no sense to them. They don’t have the patience for even such modest pieces of abstract puzzling. Instead, we dive right in and I explain each action as it comes up. Piece by piece the puzzle comes together. By the end, they’re as absorbed in their street designs as any gamer. I win by a single point. And as we all sit back, I look up at those same four walls I always do and feel, just for a moment, like I’ve built myself a whole new house.

March 15, 2021
Rating
3.0
Welcome To...
A fine balance of strategy and tension together with a satisfying sense of construction are the makings of this otherwise dry flip and write game.
MT
Matt Thrower #1 Reviewer 286 reviews

MattFantastic replied the topic: #320584 15 Mar 2021 11:25
In one of my favorite instances of hobby games hitting the mainstream, Harry Potter (Daniel Radcliffe) recently mentioned that he's been obsessed with Welcome To... in a People magazine interview.
Read More...