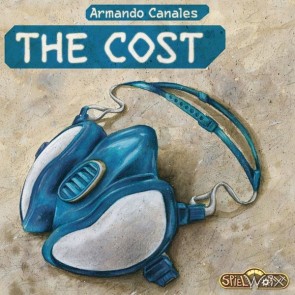 Death arrives in an unassuming beige box. There’s a picture of a filter mask on the front and a legend: The Cost. Inside, more beige, more masks and a mixture of four-player colours and four country colours. Punching the boards and tokens into the box, the only hint of what’s to come is the coffin icons at the bottom of each player board.

At first, death takes the guise of a fairly heavy economic euro game. Each country has a demand track, a series of events for things like building rails or ports, and its own distinct geography of triangles. On your turn you choose a country, resolve the event token and place it on a peculiar action selection grid, overlapping three hexes. You get the actions on those hexes, and that junction is blocked for the rest of the game.

Our goal is to profit from the asbestos industry. An easy way to make money is to build rails or ports, try to get priority shipping, and charge players for using your transport network. Bigger money can be made by mining asbestos and transporting it for sale. The biggest reward requires the hardest effort: taking mined ore, refining it and selling that. There other factors to consider, such as exchange rates and the political climate in each country.

While trying to get our heads around this complex network of cause and effect, we almost miss the central point of the game. When we mine or refine asbestos, we face a stark choice. The more workers you assign to these tasks, the more product you get out, but the more expensive it is to perform the action. Unless, like real-world industry, you choose to do so without safety precaution. In that case, you pay a different cost: the death of a worker, who goes into the coffin icon, an eternal reminder of your murderous negligence.

When I explain this, I want it to be a moment. A pause when the players suck their teeth and nod silently in appreciation of the horrors of capitalism. But there’s so much going on in the rules and those first few turns that it doesn’t happen. I try to do the right thing and pay for the safety procedures. Other players do not and walk away with a fatter profit. What they don’t yet realise is that the spectres of their dead will come to haunt them.

It’s not until later in the game that the cost of The Cost comes home. Each death reduces demand in that country as the real-world effects of asbestos are realised. It also makes it harder for a player to change tack, as dead workers increase the cost of implementing safety procedures. It’s the best kind of emergent theme, simple feedback loops that have the expected real-world impact on the game state. As the bodies pile up in the coffins, mouths begin to drop open in horror.

As the game goes on, my attempt at playing safe begins to pay dividends. Having scraped along on a shoestring for the first few turns, I’m able to reap the rewards of continued high demand in the country I’ve focussed my operations in. It’s not been easy: The Cost is a deep, difficult game with a lot of moving parts. Essentially, my reward for working harder in the early game is a clean conscience. 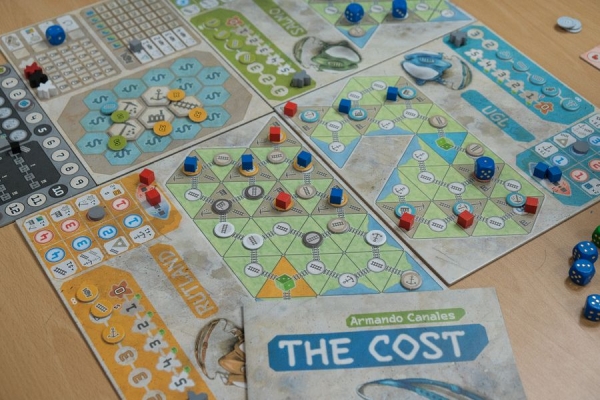 Other players now want a piece of my market, but it’s too late. To get their dirty asbestos to where I’m based they have to use my transport infrastructure. This is not a heads-down game of silently contemplating one’s own play mat. As the four turns draw to a close, we’re still jockeying for the best transport routes and rights. Still trying to undermine exchange rates favourable to our opponents. Still worrying about how many workers we can afford to save.

At the final reckoning, the body count doesn’t matter. Only the dollars do. And my attempt at playing a decent employer, while viable, has not paid off. Yet I’m left with a sour taste due to more than the loss. I might have kept my employees safe, but the game says nothing about my customers. All the houses and workplaces I’ve infiltrated with carcinogens to make a quick buck. It’s a distinctly uncomfortable feeling which, I imagine, is exactly the point.

Although The Cost differentiates itself with morals, the game mechanics at its core are good enough to make us want to try it again. Its interlocking dance of trade and transportation features steps from a number of well-known titles. The railway and port aspects are like the Steam family. Pushing mines and mills into the mix makes it like Brass. Although it has no shares to sell, the market mechanics are a little like Power Grid. While complex, the mechanics fit together like cogwork, with little that feels superfluous.

This time, I focus on profit over people. It’s a decision that feels easier than it should, made more out of interest than integrity. There’s a slight frisson of guilt as I place the meeple in its coffin, but not the nauseous impact of my first mass bombing in Labyrinth. Again, though, as the bodies pile up the emotions intensify. And it isn’t the get out of jail free card I’d hoped. Plummeting demand brings with it a whole new set of problems to solve. I don’t solve them and end up defeated by the game’s weight.

Putting moral choices in the hands of the players is a bold move, but one that can backfire. It’s up to the individual as to whether they want to engage with it or not. Even games that exist solely to provoke an ethical reaction, such as Brenda Romero’s Train, won’t work for an unethical player. The Cost haunts me for a few days because I chose to empathise. Those who choose not to are free to enjoy it as the fine economic game it is. And as they do so, they won’t realise they’re being excoriated as exactly the sort of people who were happy to profit from the asbestos industry in real life.

March 22, 2021
Rating
4.0
The Cost
A hard and heavy economic game with plenty of interactive strategy to chew over, and a side helping of bitter morals if you choose to sample them.
MT
Matt Thrower #1 Reviewer 286 reviews

MattFantastic replied the topic: #321011 22 Mar 2021 09:57
I've gotta check this one out. I'm so supremely into seeing games try to get at complex subjects while still being games. In board games, we see so much of it in historical war games, the illumination you can get from playing through a conflict, inhabiting the decision space, and ruminating on why choices were or weren't made. It's obviously not the same when you're sending chits off to die, but it is still something you're forced to think about and you typically come out of it with a bit more understanding of the realities of the conflict.

But we see so little of it on other subjects. Holding On is a great example of what sort of experiences we can have in board games but really aren't much yet. Train was a long time ago, and its brilliance didn't really spark the revolution in "art" games that I had hoped to see. Digital games have been all over it for a long time, tabletop RPGs (especially in the indie scene) are doing some amazing things, but board and card? Not so much. Lots of reasons why it may be harder, but it's possible and I long for more of it.

If you haven't yet, check out SHASN. I did a bit on it so I'm biased, but I adore how it deals with politics and the balance between idealogy and victory at all costs.

(Weird timing on this, I was just in a roundtable "more than a game" discussion as part of the Tabletop Mentor program a couple of days ago and Rory (Story Cubes, Holding On) and I were talking about this a bunch! Look out for Rory's Depressing Story Cubes Spring 2023 haha)

jason10mm replied the topic: #321012 22 Mar 2021 10:20
This is a fascinating theme for a game. How easy is it to look past "the cost" and just see it as a stack of colored cubes or whatever? The game should force a player to make a verbal announcement of a dead worker or something to hammer home the impact in lives, lest it fall into the "one death is a tragedy, a million is a statistic" pitfall.

I'm also curious as to the path to victory. Could you win with a safety program to make OSHA proud or conversely burn through workers like an iphone assembly factory but counteract it with a PR program or something? Are players forced to walk the same fine line each time or could you win with an extreme playstyle so long as no one counteracts it (kind of like hoarding military or blue monument cards in Seven Wonders, it only works if no one is stopping you)?

I have a feeling we will see more "socially conscious" games like this as designers learn to utilize games to promote agendas (though i suppose this has always been the case, does Monopoly and Life promote a specific agenda?) and incorporate more varied themes.

jason10mm wrote: This is a fascinating theme for a game. How easy is it to look past "the cost" and just see it as a stack of colored cubes or whatever? The game should force a player to make a verbal announcement of a dead worker or something to hammer home the impact in lives, lest it fall into the "one death is a tragedy, a million is a statistic" pitfall.

It's not difficult to look past the theme if you don't want to see it. You put a meeple in a coffin and demand goes down: that's about it. I find it hard to see how any design could truly reach people who refused to be reached, unless - like Train - it's a one-play designed for shock value.


jason10mm wrote: I'm also curious as to the path to victory. Could you win with a safety program to make OSHA proud or conversely burn through workers like an iphone assembly factory but counteract it with a PR program or something?

Both routes to play are viable: you could absolutely win with a good safety record. But what the game does do is essentially force you to choose early. If you want to be "good", you will need to plan for it from the beginning and act accordingly. Likewise, as soon as you start racking up a body count, your safety costs increase so there's no way back onto the moral path. It is possible to start out safely and then become unsafe after a turn or two, but the inverse is not the case.
Read More...