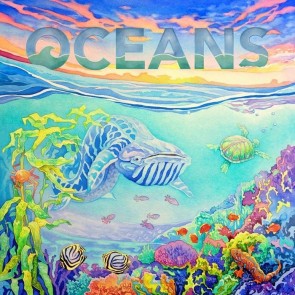 Even the sturgeon and the ray get the urge and start to play...

It’s been seven years since Northstar Games released Evolution, a fascinating tableau-building card game that plays out in a unique way. Every game ends up with a bespoke ecosystem of species in different sizes, ranges, traits, and diets arrayed on your tabletop. The challenge comes in managing these hypothetical animals by adapting them to their environments and most importantly keeping them fed and alive- whether that means preying on other animals or evolving to avoid being preyed upon. I reviewed this game and its expansions (Flight and Climate) very favorably for their high level of interaction, volatility, and the brilliant ways it expresses the themes of survival, change, and coexistence. Now, Dominic Crapuchettes and a new team of codesigners have produced a follow-up to this great game with Oceans which, as you might expect, recasts this saga of adaptation, propagation, and eating into the depths.

Many of the concepts remain largely unchanged. The general flow is the same- using Trait cards to establish species and managing their populations, feeding routines, as well as their ongoing adaptation to changes in the on-table environment which may be impacted by  neighboring species to the immediate left or right of a given animal. The idea is that as species age, some of their population gets banked as victory points – an indicator of the species’ success within the biosphere. So you want to keep your tentacled, parasitic, whale cleaning whatever-it-is fed, protected, and reproducing so that their longevity translates into a win.

Foraging, one of the core mechanisms, has been significantly reworked. This time out, rather than playing a card each round to place (or remove) food tokens into a common watering hole area, delicious food tokens are migrated between four different ocean zones. It’s somewhat harder to get completely cut out of dinnertime and there’s a little more finesse required in moving food around.  Eventually, when one of these zones is emptied, it triggers a shift in the game as time moves into the Cambrian Era. This is where those Deep cards you may have picked up and banked become eligible to play, and these Traits are all unique and tend to be more higher-powered than the cards in the common deck. 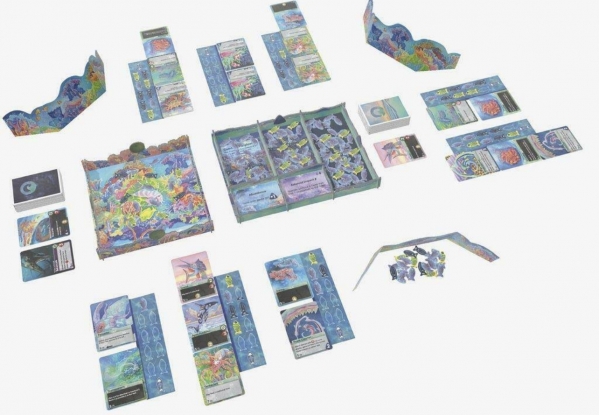 This is a very cool thematic beat because it suggests an explosion in biodiversity and more unique, singular adaptations occurring over epochal time. Suddenly, evolution takes a turn and there are bioluminescent or camouflaged animals, new feeding methods, swarming species that never overpopulate, or maybe a really old and massive leviathan-class monstrosity. There’s a certain long game element that comes into play when you draw these cards and hold on to them, waiting for that Cambrian Explosion to open the floodgates to some of the wilder and more biodiverse species. These elements are what really set Oceans apart from Evolution, and I think that most players will likely miss them going back to the previous game.

Also, the themes of adaptation, evolution, survival, predation, and codependence are even stronger than they were in Evolution as are the potentials for combinatorial traits, species, and even placements. All in all, Oceans represents something more than a sequel as it borders on a redevelopment of key concepts and ideas. It’s slightly more complex, sometimes a little more ponderous, but I feel like this is ultimately the better game, even taking into consideration the excellent Climate expansion for Evolution that made that game deeper and more detailed.

Evolution also had great illustrations- at the time I compared them to the kind of depictions of prehistoric animals that you might have seen in a dinosaur book circa 1982. The illustrations in Oceans are just as great and, in many instances, even better. There’s a certain psychedelic nature to it all that suggest an alien otherness of these animals, with soft almost impressionist lines and a riot of foliage, patterns, and markings. I love the color and atmosphere of the game’s art- there is mystery and wonder here, driven by speculative biology.

It is also worth noting in closing that Oceans is also available as a high quality, very nicely executed free-to-try app that also features a full tutorial. It’s a nice look at the game and good way to learn to play or teach it to others. But the physical game looks lovely and unlike many games with apps, I don’t feel like the digital edition replaces the tabletop version.