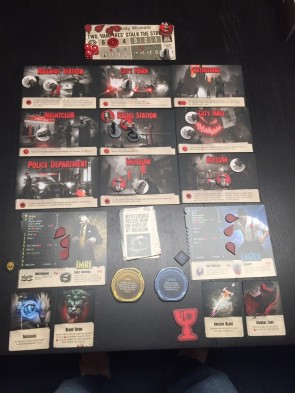 Masters of the Night is a Kickstarter board game that just recently shipped to backers like myself. It is a cooperative/solitaire game for 1 to 5 players, and can be played in 30 to 120 minutes. The game designer is newcomer Nikolay Aslamov and the publisher is Ares Games. Some of the graphic design was done by Peter Gifford, who is better known at BoardGameGeek.com as Universal Head.

The setting is a nameless metropolis in the late 1940s, like Gotham City without a Batman. Each player controls a member of a vampire family (from Hungary, judging by the names). Each vampire starts with a unique power, and can unlock an additional unique power by leveling up with a literal body count. The players win if they can perform certain mystical rituals before the event deck is used up, and they can lose if they fail to keep their vampiric nature a secret from the general public.

The art in the game is excellent for a board game, all black and white with splashes of color like the Sin City movies. Each vampire has a signature color, as well as an excellent quality plastic miniature rendered in a silvery gray that seems to attract shadows. I especially like the vampire with the pimp cane and the vampire with the classic vampire hands. The minions of the vampires and the enemy agents tend to have short life spans and are represented with two-sided cardboard tokens. The back of the event and relic cards are made to look like newspaper clippings. One of the primary type fonts is one that resembles the work of an old-fashioned manual typewriter. The box insert is perfect for the contents, which makes for easy setup and takedown.

The city is made up of nine modular sections that are randomly placed during setup. Some sections have day abilities that automatically trigger at the start of each turn, while the rest have night abilities that offer optional actions to the vampires. Every city section is useful, and some need to be defended against the human agents who hunt the vampires.

Each turn, the first player draws and resolves an event card. The primary purpose is to determine where the agents spawn, but there is always a secondary effect, and those effects ramp up in difficulty as the game progresses. When agents show up in a location that is already occupied by either a vampire or a minion, the Veil drops, indicating that the vampires are in danger of public exposure. The Veil starts at six, and the game ends in a loss if the Veil ever drops to zero. It is entirely possible for the veil to drop by five points in a single turn before the players even get an action.

Each player gets two action points per turn, and most actions require just one point. Only two actions increase the Veil: creating a new minion and using the night action at the Radio Station location. Fighting a revealed agent takes one action point, but it usually takes an additional action point to first reveal the agent.

Combat is deterministic in nature. There are dice, but they are used to generate a dice pool. Usually the dice are only used in combat, but one location also allows players to spend dice on other actions. In combat, a vampire must spend one six-sided die per revealed agent in the location. A 5 or 6 kills the agent, while a 1 or 2 leaves the agent intact and costs the vampire a blood point. A 3 or 4 results in both of those outcomes. When the dice pool is used up, all the dice are re-rolled to fill up the dice pool. If a vampire runs out of blood, it is out of action until next turn, and waking up costs one point of Veil in return for one point of blood. Combat by day requires the vampire player to select the lowest available die.

Control of the Museum location offers players a steady supply of magic relics. Some are limited in utility and others are broadly useful.

I only rarely do extensive reviews, because I don’t play board games often enough to develop a useful opinion in a timely manner. Thanks to the pandemic and the solitaire nature of this game, I was able to play several games with varying numbers of vampires for the sake of this review. I lost the first three games before finally getting competent enough to win a couple of games. All of the games were played at the easiest difficulty level.

Because I kickstarted this game for more than the minimum purchase level, I received an additional box of expansion materials. Most of that box contains upgraded components for the base game, and the rest consisted of five more city sections, some new event cards, and a seventh vampire. None of these materials are crucial to the game. Some of the upgraded materials do not properly fit in the expansion box insert.

Pros: For a first effort by a new designer, Masters of the Night is an impressive game with tight, organized rules and solid gameplay clearly refined by extensive playtesting. The rotating first player role offers relief from the traditional alpha player problem that plagues most co-op games. The game is very challenging, and scales smoothly from one to five players, while the difficulty level is easy to adjust. The players have plenty of meaningful choices to make, thanks to an array of potential actions, mystic powers, and relics. Leveling up is mildly enjoyable, and the components offer a respectable amount of replay value. Each game uses less than 1/3 of the event cards. The quality components work together to deliver a strong sense of the setting.

Cons: Like most co-op games, Masters of the Night is essentially Whack-A-Mole. The section of the rules explaining deployment of agents is somewhat unclear, but is immediately followed by a very clear example of play. The constant pressure of maintaining the Veil is not enjoyable, and becomes more crucial with more vampires in the game. During my five-vampire game, I left one vampire at the Radio Station for the entire game, to keep the Veil under control.

If you like vampires and co-op or solitaire games, you should go to the trouble of acquiring Masters of the Night. I had low expectations and sometimes regretted kickstarting Masters during the long wait for delivery, but it now appears to be my game of the year, so far. As soon as I submit this review, I am headed back to the table for another game of Masters of the Night.

charlest replied the topic: #322054 14 Apr 2021 10:14
Thanks for this. I've been following your discussion of the game in the forums and my curiosity on this one has remained.

Shellhead replied the topic: #322082 14 Apr 2021 13:37
I realize that this review was more dry and mechanical than the norm for this site, but one of my few issues with the game was tied to a specific mechanic, so I felt compelled to talk about the rules in some detail.
Read More...