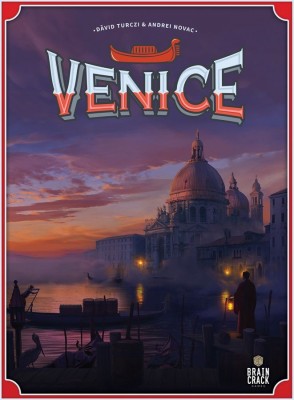 I’m of a particular generation that can’t see a gondola without singing “Just one Cornetto….” in their heads, thanks to TV advertising in the 80s. Fortunately, thanks to the Venice board game, from Braincrack Games and designers Andrei Novac & Dávid Turczi, I now picture little cubes instead. It’s a start.

Venice is a gorgeous-looking mix of worker placement and pick-up and deliver mechanisms. Players move their gondolier between their two gondolas, navigating the famous canals, and leaving their apprentices in the various buildings and businesses of the 16th century setting. The trouble is, rival merchants are trying to do the same, increasing their influence in the city. While all this political and mercantile posturing is happening, players have to be careful not to raise too much suspicion, otherwise they might find themselves on the wrong end of the Venetian Inquisition.

Venice is a really simple game to play, on a mechanical level at least. Move your little plastic gondola along, pay any costs for the distance travelled, resolve any passing of rivals, and pick up or deliver stuff. You can place your assistants in the buildings around the map, but there aren’t enough to place one in every building, so there are some tricky choices to make. The longer an assistant remains in a building, the more powerful and influential they become, and the greater the rewards for coming back. Make money, spend money, buy stuff, complete missions with the stuff – you know the score. 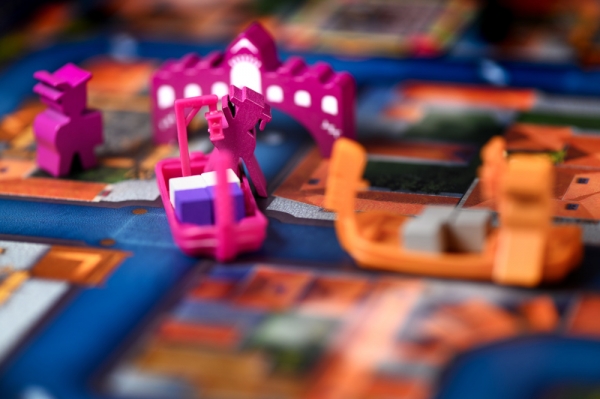 A gondolier with his precious cargo of cubes ¹

There are a set number of missions available, and when the last mission card is drawn the end of the game is triggered. The same thing happens when someone reaches a preset level on the Major Council track. When that happens, scores are tallied, and to the victor – the spoils. In a really interesting twist for a Euro game though, if a player ends the game with any amount of intrigue on their player board, and has the most among the players, they instantly get arrested and lose! I wasn’t prepared for this, it’s a really unusual thing for a game like this, so make sure all the players are aware of it before the first game starts. Playing a game for an hour then finding out it was all for nothing is a real kick in the teeth, and not something you want your friends and family to experience.

Actually, maybe that’s exactly what you want. Luckily, I’m not here to judge you.

I really like Venice. It does something really clever, because it takes a medium weight game, and makes it feel much heavier. It feels like you have loads of decisions to make, but in reality, most of the time there are only a few valid ones. All of the missions are similar: collect a load of orange, purple and/or grey cubes (ceramics, cloth and silver respectively), go to the correct building, turn in the cubes to complete a mission card. There are only a few moves you can, or would want to make when you move your gondola, because only the first move is free. Every stop afterwards costs money.

What makes this feel deeper is the variance in setup. The locations of the buildings are changed every time you play, and there’s a deck of intrigue cards you can draw from to give you one-off bonuses. It means you can’t go into your next game thinking “I really ought to get my assistants in the church and library this time“, because they’ll probably be in completely different places.

I really like how well the theme has been baked into the gameplay. It’s not something I can always say about a Euro game, but it’s true with Venice. Let me give you a couple of examples. 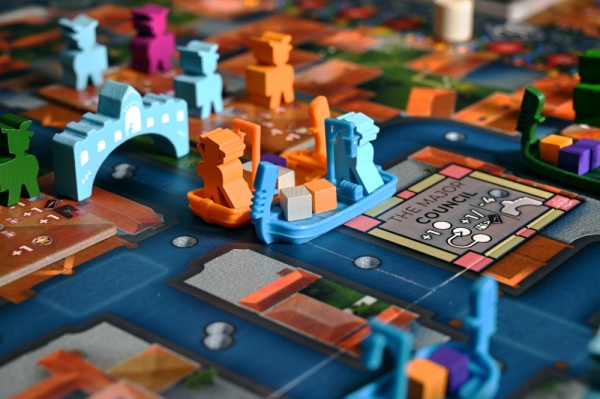 Things get busy around the narrow canals, trying to pass is an occupational hazard ²

If your gondola moves past another player’s, you have a choice – give them a scroll (like currency) as a bribe, or word gets around the canals that you’re up to something, and your intrigue level grow. Intrigue is a bad thing. So how do you get rid of intrigue? Easy, head to the library or church and get your assistants working there. After all, who’s not going to trust a man of the cloth or a librarian? At both locations, you can actively reduce your intrigue.

Alternatively, maybe you’ve planted someone in the mint. Sure, they can sneak you some money out when you visit them, but at the cost of suspicion, and raising the intrigue level again. It’s little details like this that make Venice feel like more than a game which has been built around some mechanisms, and then had a theme stickered over the top.

I think it’s only fair to mention the plastic gondolas that come with the game. Yes, they are incredibly cute, and many a grown man will have no choice but to make motorboat noises as they drive them around the board. Yes, it’s also very cool how they have the perfect space to carry up to five cubes in the front (the most you’re allowed to carry), and a little place for the gondolier to stand at the back. BUT, they also have a little plastic post and lantern on them. It looks really cool, but I find it nearly impossible to get the cubes and gondolier in and out of the boat because of it. 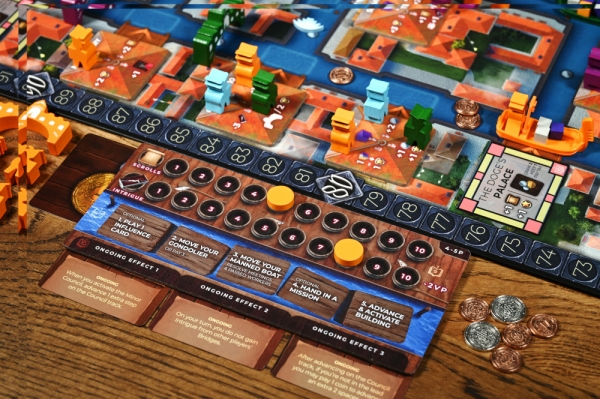 A view of a player board with the scrolls and intrigue tracks. Note that the metal coins are an upgrade, not standard. ²

The number of times I’ve caught the post with my hand and accidentally tipped the boat over and spilled everything, or tried to move the gondolier and done the same, isn’t funny. It’s especially annoying when you’ll be moving the gondolier between your gondolas on nearly every turn. It got to the stage where I was just placing him next to the boat each time. I think the problem can be solved by just chopping the post off, which I’ll probably end up doing. Your mileage may vary of course, but I’ve got big hands (strangler’s hands I’ve been told) and it was annoying enough for me to write this.

Otherwise though, the component and art quality is top-notch, and I love what Braincrack do by putting little colour-coded cardboard boxes in the game. Each player can just lift theirs out and have everything they need in it.

One man and his Doge

Anyone who spotted Dávid Turczi‘s name at the top of this review will be pleased to know there’s a solo mode included. Along with Xavi Bordes, he’s added the Doge as an opponent. No… not that doge, meme fans. The Doge was the head of state for Venice back in the day. 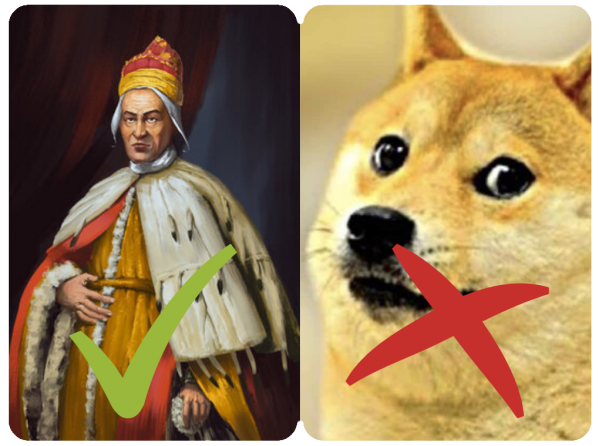 Know your Doge – One of these ruled the military and economy of Venice, the other is much wow, so board game.

It runs really smoothly, and in a change to a lot of automa opponents, you get to choose which card gets used on each turn, from a choice of two. In line with every Turczi solo opponent I’ve played against, there are options in the rule book to make the game easier or more difficult, should you want to do either. The Doge is a tough opponent, and it really reflects the feeling of a multiplayer game.

Venice is a great game. I don’t own many games where the distance you can move per turn is a factor. The closest I usually come to that is a rondel. I’ve played pick-up and deliver games in the past, but none felt as mature as Venice. The gondolas are annoying to handle (for me at least), but as I mentioned above, I think I can fix that with a sharp knife. The theme is really well implemented, and a lot of what’s happening makes sense and is logical. Mooring spots get really cramped when more than one boat is there, and there’s a feeling of claustrophobia and narrowness when you’re trying to make your way around the canals. 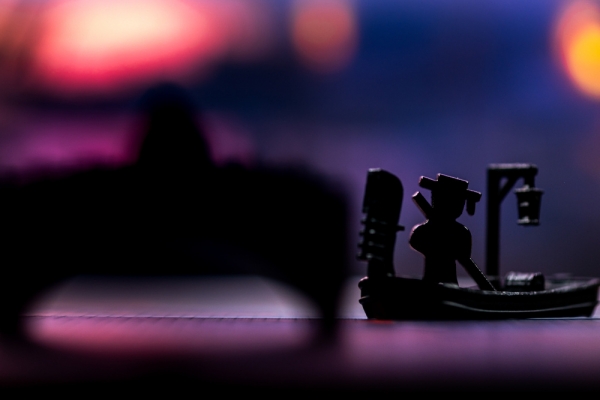 A lone gondolier at night ¹

I think the sweet spot for Venice is three players. Anything more and it feels very busy, and it’s hard to tell from a glance what’s happening. I like the way two-player games are handled, where the game gives each player a smuggler deck and an extra gondola. The smugglers act as dummy players you control. I know some people really dislike dummy players, but these are more active and under your control, and without them the board would feel empty. That said, I’d try to introduce new players with a three-player game, so they lose the overhead of trying to run a smuggler as well as their own turn.

At first the insta-lose condition of having the most intrigue left at the end of the game was jarring for me, but it’s something I really enjoy now. Intrigue is like a bad commodity you can spend during the game, you just have to keep an eye on the board and make sure you clear it before the game ends. You get a two round countdown when the end is triggered, so it’s not quite as harsh as it sounds, and you get an opportunity to reduce it with left-over money and scrolls.

Venice is a smart, easy-to-learn Euro, with a nice level of player interactivity. Each time I play it, it feels fresh, and I love the feeling of a sprint finish with the end-game is triggered. If you’re a Euro game fan and there’s space in your collection for something a bit different, I really recommend giving it a try. There’s an official Tabletop Simulator mod here you can try right now!

Review copy kindly provided by Braincrack Games. Thoughts and opinions are my own.

April 01, 2021
Rating
4.0
Venice
Venice is a smart, easy-to-learn Euro, with a nice level of player interactivity. Great artwork and components, and a nice solo mode.
A
adamr 1 reviews