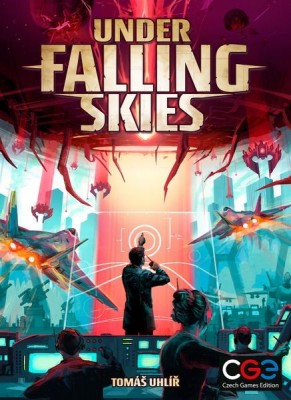 Setting up Under Falling Skies for the first time, it feels like setting up Space Invaders: the Board Game. Seeing as this solo title has you in command of a task force repelling an alien invasion of earth, this, like Flip Ships, is likely deliberate. There are board segments to make up the skies, where neon plastic ships descend toward you. Two more segments make up your base, where you must plan your defence and research an end to the alien menace.

Under Falling Skies, however, is nothing like the game it appears to be. The key component is also the most low-key: five wooden dice in two colours.

On my first turn, I roll all five and right away I’m caught on the horns of an extradimensional dilemma. There are five columns to the board, and each can hold one dice in one of the rooms of my base. The different rooms have different effects like research, shooting down alien ships, boring deeper into the base to make more rooms. The higher the dice, the better the effect. But the alien ship above descends by the same number of spaces. Damned if you do, and really, there’s no other option.

So, we set to work. Each turn the mothership descends one row, releasing alien craft closer to earth, so I’m on a tight timer to finish that research. But if I don’t see the attack ships off, their accumulated damage will destroy my base. And if I don’t dig deeper, I won’t reveal the best effects. It’s a demanding dance of death, and this is only the basic game.

Research is the obvious goal, so I start by assigning a high dice there. But, like with everything else in Under Falling Skies, there’s a catch. The different steps on the research track demand different numbers of pips to complete. A high dice might be wasted. Likewise, the descending mothership triggers bad effects, one of which is to cancel research steps. That’s troublesome if it was a small step, tragic if it was a big one.

However, the game’s biggest kick is yet to strike me in the teeth. Remember those two colours of dice? Choose one of the two white ones and when you assign it to your base, you have to reroll all the remaining unassigned ones. Because there are two, I’m forced to do this at least once. Will they come up better, or worse for what I need to achieve? It’s a gambler’s dream and a gambler’s nightmare. Double damned if you do and, still, there’s no other option.

My, but solo games are just not supposed to manage this much deliciousness. 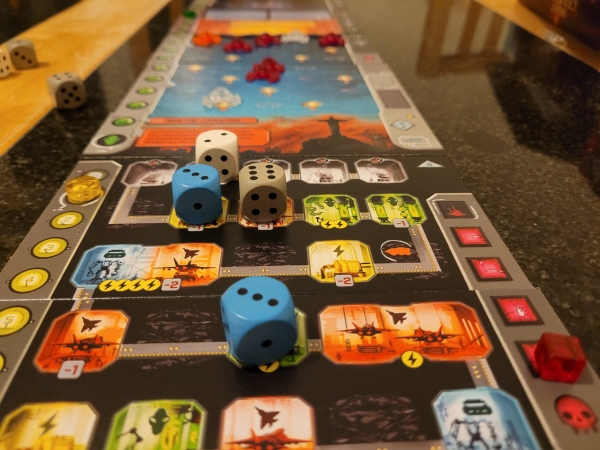 After my first re-roll, the random number gods have me in their thrall. Every decision, every rattle of the bones, forces me to try and pick the least from a multitude of evils. As the game wears on it becomes clear that I’m likely to win. The dice never make it a certainty, but the pressure cooker cools down. This introductory game ends with a victory.

Turning it up a notch involves flipping one of the sky boards over. Such a small thing. Such a little thing. The research track made a tad harder. The negative mothership effects turned more negative. Yet the resulting fear and doubt is something to behold. No easy win this time: death rains down on my unfortunate base from above, and humanity succumbs. I feel personally at fault.

It takes several tries to master that one flip, the standard game. The thought of making it ever harder by flipping more never enters my head. In each game I see better ways of arranging the dice. I learn what needs to be prioritized at different stages of the game. I work out how to use robots, blue dice that act as automated workers to supplement your rolls. Increments of improvement that make for an addictive game. And when I grind out that win at last, I feel like it’s an achievement earned.

Yet the small game box has more to give. Atop the contents are careful instructions to approach the game in layers. Beneath the essential components for the standard game is a stack of scenarios. Each offers options for different base layouts, special abilities from a city to defend and a character to play. There’s a comic strip introduction for each to set the scene, and you can chain four together for a campaign.

After the excitement of the standard game, I’m itching to get stuck into this narrative. But the comic leaves me a little cold. And while the new tools in my armoury add extra dimensions to the challenge, they also highlight the limitations of the formula. Under Falling Skies makes its brief rules do an astonishing amount of work, but there’s only so much variety they can support.

Still, the core challenge of rolling those dice, assigning those numbers and worrying about those re-rolls powers me through to the end of the campaign. By which time, Under Falling Skies has already proved its worth. In an age of enforced solo gaming it's kept me at my table for a week, sharpening my wits and stimulating my senses. Solitaire play may always be a niche concern, but when it's as good as this, it's a godsend.

April 05, 2021
Rating
4.0
Under Falling Skies
With its accessible yet tense combination of dice, timing and strategy, it's hard to imagine solitaire gaming much better than this: but it's still solitaire gaming, and the narrative elements fall flat.
MT
Matt Thrower #1 Reviewer 286 reviews