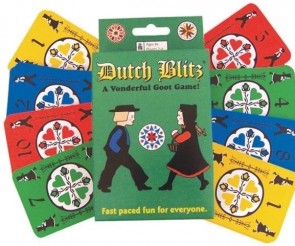 Dutch Blitz® is a fast-paced card game meant to test your skills, smarts, and speed, and is potentially both the best and worst thing that has happened to me in the world of gaming. I was introduced to this game at Family Game Night about 3 months ago, and my life has never been the same since.

Ok not actually, but a little.

According to the Dutch Blitz website, the game was invented by a German immigrant and optometrist named Werner Ernst George Muller, and he believed the game might help children learn colors and numbers. What I can tell you is that when any singular member of my family is prepared to play this game, you better keep your children far away, especially if they’re young enough to not have mastered colors and numbers.

This is because the game gets cutthroat immediately, and it is the best. Picture this: You have your deck of cards. There are four colors, and each color has cards 1-10. With your deck of cards, you create a few different piles in front of you. One is a stack of ten, one is a row of three, and the rest of the deck is in your hand. Once everyone has set this up and the sneakiest family member shouts, “123GO!” at the speed of light, you begin to move cards everywhere. Cards are zooming from your hand into the middle of the table, from your hand onto your row of three, from your stack of ten to your row of three. It is absolute chaos, and the best part is that all players are sometimes dive bombing the same card in the middle of the table.

If your family is like mine, there is sometimes blood. Not really on purpose, but some of us have sharp nails, you know? So when both myself and Aunt Vicky are desperately trying to put that blue four in the middle of the table, shit goes down. And finally when the madness has reached its peak, one person will have moved all of the cards from their original stack of ten, and that person proudly shouts, “DONE” for all to hear. The chaos then ceases, and it’s time to count up the score. It’s quite the spectacle.

Which honestly, is why I love the game! It’s addicting to figure out a strategy, and combined with a little bit of luck, beat the pants off your loved ones. There is nothing more satisfying than finishing a round with 34 points before the person next to you even had a chance to think about what was going on. It really does challenge you to react quickly, and it’s definitely a great mental activity to sharpen your mind. If you’re looking to keep mentally active and are bored with sudoku lately, this is your new game.

Another added bonus: you can very easily be in the negatives for any given round, and for your overall score as well. It is hilarious when someone is about to win the whole game and another person at the table is like, “hey watch out though guys, I’m really on a streak here. Gettin’ pretty close at negative 22...”

In terms of down sides though, there are arguably a couple. For one, the bleeding thing. That’s not for everyone (but also if you’re not willing to bleed for a game are you even trying?). Another thing, if you get too carried away you’ll bend the cards, and that’s always sad to see. Finally, it can also be super frustrating to consistently lose this game. If you are slower or distinctly unluckier than your friends or family, you will probably not have a good time (but as a consequence, they will have a great time).

Overall, the creators of this game have deemed Dutch Blitz “A Vonderful Goot Game” and I could not agree more. It’s smart, simple, incredibly addicting, and is sure to bring out a competitive side in even your most reserved friends. It’s a small, portable game that could surely take over a Saturday evening, and you won’t be mad that it does.

P.S. I have just discovered that they make Dutch Blitz t-shirts, and I must own one.

April 21, 2021
Rating
5.0
Dutch Blitz
Dutch Blitz is smart, simple, incredibly addicting, and is sure to bring out a competitive side in even your most reserved friends.
MH
Madelyn Holthouse 1 reviews

Sagrilarus replied the topic: #322411 21 Apr 2021 17:04
So, in my youth I played "Spit" which is more or less this game with a regular 52 card deck and the result is that I have the logic and clock speed burned permanently into my brainstem for this play. After you get about 100 hands in the game just happens, whether you're paying attention or not.

I was visiting the north Baltimore game group when Mike B brought this out and frankly, I didn't know what it was. In theory it was everybody's first time playing, but my brain knew otherwise. Halfway through the first set the tape backup of the skillset needed for this game came online and I positively crushed everyone at the table. It was almost embarrassing. But I couldn't turn off the muscle memory.

I recognized it as Spit at the outset, but if you had asked me (and they might have) I'd have told you that yeah, I knew how to play but I was 30 years rusty and would probably not do very well. It didn't take long for that to be disproven.

With four experienced, sharp players this can one hell of a ride. It's one of those games that looks too elementary to warrant your attention, but when things start to roll hold on for dear life. It's not uncommon for players to call dear friends and loved ones names that shall not be repeated on a family web site.

DukeofChutney replied the topic: #322414 21 Apr 2021 18:10
I've played Dutch Blitz a couple of times and both loved and hated it. I am not naturally very good at real time reaction speed games, but in a fun crowd i enjoyed it.