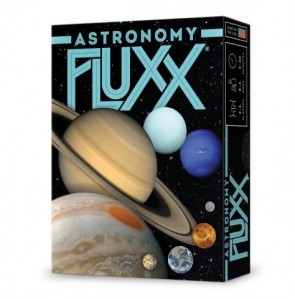 A Hitchhiker's Guide to the Solar System.

Space is Big, I mean really big. Even if you try to limit your focus to, say, the Sol system in Mutter's Spiral, it is still really, really huge. People have tried to explain how far it stretches in so-called Layman's terms, explaining it would take 229,300,900 people standing on top of each other to reach the moon. Assuming the person explaining has a Phd in Astronomy, a minor in the circus arts and has some way to avoid having people float off or explode once we have breached the upper atmosphere, one could only wonder why they simply didn't just pull the The Vast Emptiness of Space card from Astronomy Fluxx. 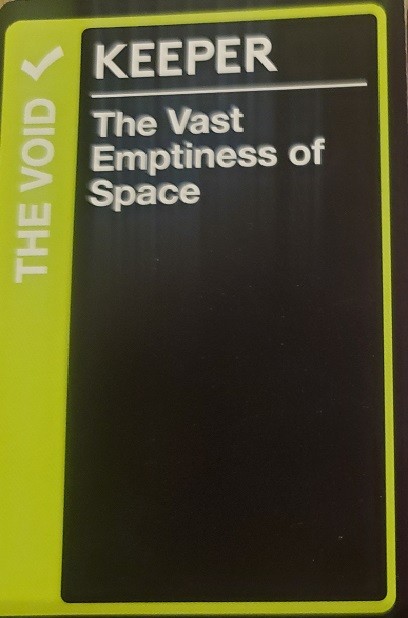 See that card? It's Black. Really Black. With The Vast Emptiness of Space printed directly across the top. It even has a helpful “The Void” printed for the Horizontally Impaired. Sums it right up. Of course, to be accurate, it should include about 100,000,000 more copies of Vast Emptiness of Space for every actual celestial body included in the game to be even slightly accurate but, then again, that would probably put it out of the running for a light, portable card game. 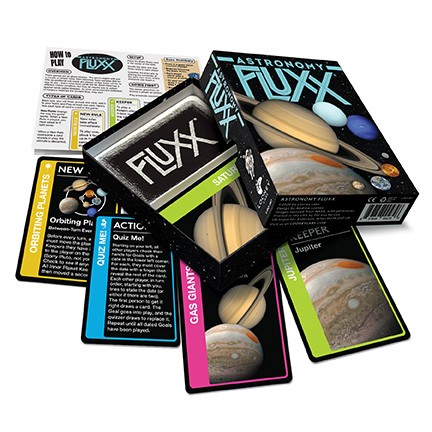 Maybe Astronomy Fluxx doesn't hold the answer to Life, The Universe and Everything but it is a snappy little game about our little corner of infinity and, if you aren't reasonably careful, might even teach you a thing or three about this little patch of blackness.

A wise man once stuttered “Fluxx is Fluxx is Fluxx.” (There is some disagreement in regards to this, with some contenting he was just stuck on one particular naughty word from those you aren't allowed to say on the Radio). Draw a card, Play A Card, doing this will add rules and goals and will allow each player to accumulate “Keepers.” Match your keepers to the current goal and you win.

Some of the rules specific to Astronomy Fluxx are ones like: Orbiting Planets. When this rule is in play, before every turn, all players must move the planet “Keepers” they have in play to the player to their right (Sorry Pluto, not you.) Check to see if anyone wins. All Inner Planets are then moved a second time. Of course, fuddy duddy stick-in-the-muds will use this Rule as a reason to whine, possibly piss and inevitably moan. “What's the skill in that?”“Complete poppycock!” and “Bah, the tea has gone cold” they will inevitably grouse. If you are in impolite company, feel free to invite them to fuck right off. For the polite option: remind them that rules are a necessary evil, that even the randomness of Astronomy Fluxx are governed by Falsifiabilty, Replicability, and that correlation is not causation....and then ask them to fuck right off. 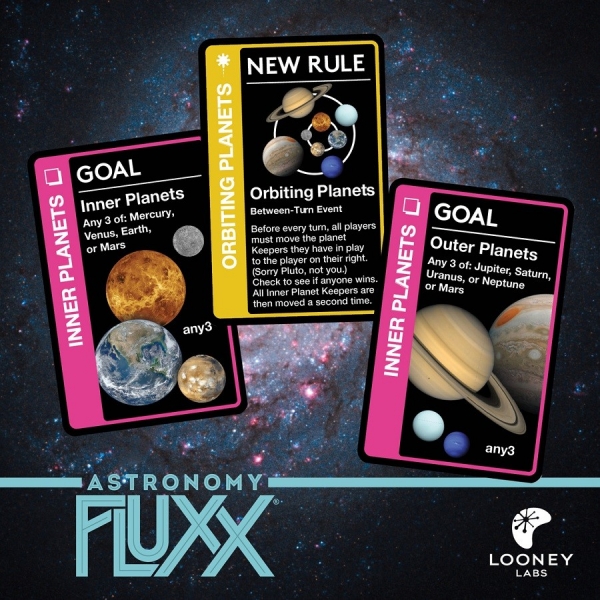 Other rules help sharpen the mind of the players, like one that let's you draw an extra card on your turn if you can name a constellation not previously name. Which leads to heated debates once The Big Dipper, The Little Dipper and Orion's belt are used up as whether “The Snappy Suspenders of Betelgeuse” is a proper answer.

Maybe you will try this release and think “Vell, Astronomy Fluxx's just zis game, you know?” Or maybe you'll think, like I do, “Hey, you sass that Hoopy Fluxx? There's a frood that really knows where it's towel is.” It's a guide to our little solar system that can both entertain and educate in a Mostly Harmless way.

This review is a tribute to Douglas Adams. If you do not appreciate it then Pardon me for breathing which I never do anyway so I don't know why I bother to say it God, I'm so depressed.

April 20, 2021
Rating
3.5
Astronomy Fluxx
Maybe you will try this release and think “Vell, Astronomy Fluxx's just zis game, you know?” Or maybe you'll think, like I do, “Hey, you sass that Hoopy Fluxx? There's a frood that really knows where it's towel is.” It's a guide to our little solar system that can both entertain and educate in a Mostly Harmless way.
W
WadeMonnig Top 10 Reviewer 195 reviews