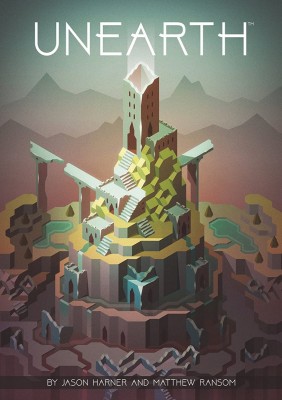 We are living in a golden age of board games. There are literally thousands of games being created and released every year. It's only fitting that some great games get overlooked, and buried under the sheer amount of plastic and cardboard produced.

But what kind of board game do we find when we unearth... Unearth.

The first thing that hits you when looking at Unearth is the art. It's cubey, isometric style and pastel colour palette is a clean and fresh take on board game artwork. But feels deeply grounded in video game art styles of FEZ, and Monuments Valley. Not surprising given Brotherwise Games other breakout is Boss Monster, which also uses video game art styles to great effect.

From there you'll notice that Unearth is all about rolling them bones. Each round you'll pick either a 3-sided die (D3), a 6-sided die (D6), or 8-sided die (D8) to roll, and then place it on one of the available ruin cards. A high roll puts you in pole position to take the card - which is good. And a low roll allows you to take a stone - which is also good. This mechanic makes Unearth stand out from other dice rolling games, because no matter if you're lucky or unlucky you still win something.

But it goes a little deeper than that. As the ruin cards you're trying to collect should be part of a set, and therefore not all ruins are created equal. You now have to influence probability to get the ruins that matter most to you, one example of this is selecting the right die. If your opponent rolled a 4 and placed it on a ruin you want, no worries! You'll just roll your D8. 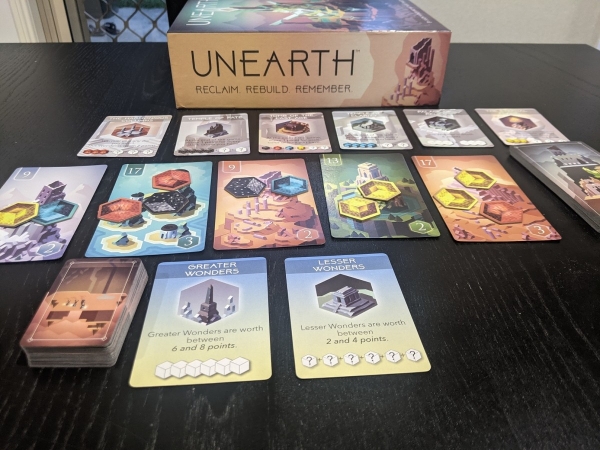 Except you used it two turns ago and now it's stuck on another ruin.

Now, you're wondering if it's worth freeing that die with another one of your dice, or should you take the chance with your remaining D6. There is a third option though; Delver cards.

These cards grant all sorts of interesting benefits, adding a card play element to the game. They're also more bountiful than chocolate eggs at Easter, and you'll rarely run out of them. The question with Delver cards is never will you get another chance to use them, it's always which Delver card do you use?

Losing a fight for a ruin, while painful is sweetened because you end up with more Delver cards. Giving you better tools for next time you're in the same position. Winning a fight for a ruin, depending on your strategy, can be even more rewarding. If not in victory points, than emotionally. As the battle for the ruin is based on who rolled the highest single die. Allowing anyone to take a gamble and win the ruin with a fortunate roll.

But what if you're the type of person who doesn't want to win ruins?

I mean they're old and busted, and I've played enough RPGs to know that not all of them hold treasure.

Well Unearth has you covered as well. 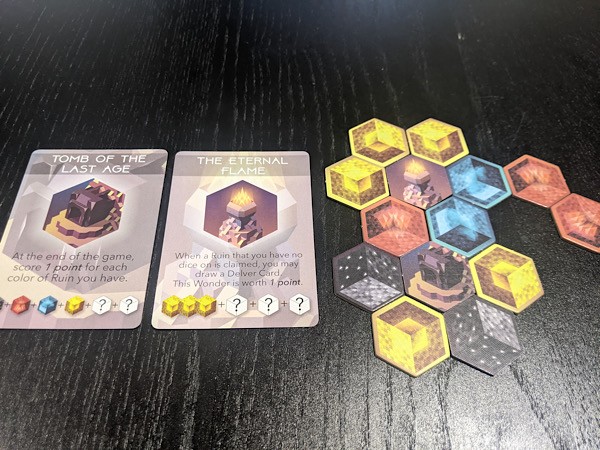 The second path to victory is through collecting stones by rolling 3 or less. After collecting 4-6 stones you can start to build Wonders. These either give you abilities, or flat out points. Another decision point. Figuring out if the ability you gain will be worth more than the points you'd otherwise get.

In a game of Unearth you're trying to figure out how to get points through these two mechanisms. Then you're figuring out the probabilities, which dice to roll, which cards to play. It's engaging without being overbearing. It also allows you to play loose, rely on your dice throwing, and take shots at stealing a ruin you desperately need. Leading to moments where you're hooting and hollering and taking a gamble that doesn't involve your life savings.

I'm honestly surprised that Unearth isn't more popular, and hasn't received more coverage from board game media. Though I think that has to do with the type of game it is. It's too light for most board gamers, and not enough marketing to break through to become a staple gateway game. Which it should be. Because as a gateway game, Unearth is excellent.

I often hear people talking about the Zen nature of games like Tokaido, and I didn't understand what they meant until I played Unearth. To me it's relaxing, and fun, because no matter what I do in game. I still feel like a winner.

May 27, 2021
Rating
3.5
Unearth
I often hear people talking about the Zen nature of games like Tokaido, and I didn't understand what they meant until I played Unearth. To me it's relaxing, and fun, because no matter what I do in game I still feel like a winner.
D
DavidNorris Top 50 Reviewer 10 reviews