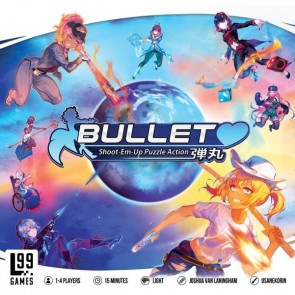 Those son of guns over at Level 99 Games have done it again. They've created an kick butt new board game experience.

Surely they can't keep getting away with this?

If you have never heard of this game think back to the 90's where there was an outbreak of arcades across the world. Think back to games like Raiden or Ikaruga, where you're a space ship shooting bad guys while all manner of ships, bullets and everything else flew your way. These mechanics combined with competitive tower defense games, made a decade later, give you Bullet♥︎.

Bullet♥︎ is played in 3 minute rounds with everyone playing at the same time on their own boards. 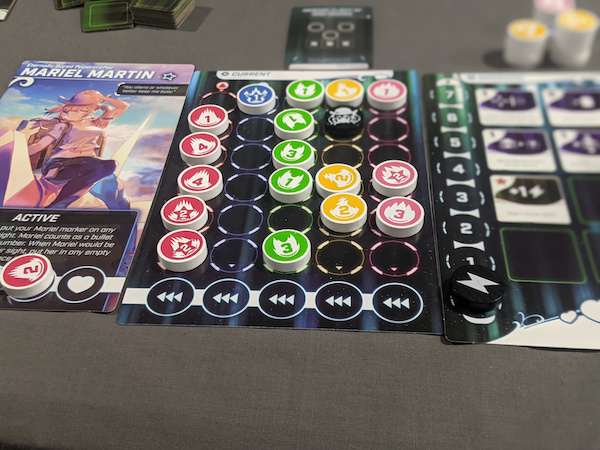 You can see how this creates a waterfall effect. Where if you pull more than one of each colour, then the closer the bullet gets to the bottom of the board. If it reaches the bottom, that's when it does damage to you. Take enough damage, and you're eliminated from the game.

Thankfully, you have special powers to help you move bullets around the board. And patterns which, once fulfilled, will help you to clear out swathes of existing bullets at a time. 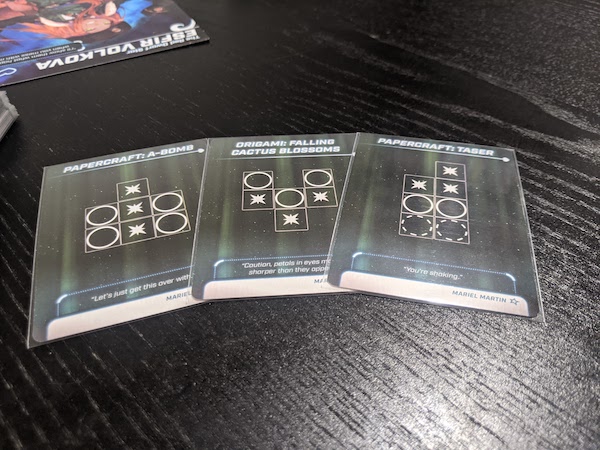 The pattern you need to match is the circles, the explosions are the bullets to remove from your board.

I immensely enjoyed Bullet♥︎ because while it's simple enough to play, you can get better at it, and learn to get better at it. In my plays I noticed I was consistently going through five layers of learning. Similar to seven layers of hell, except it's fun, light hearted, and you don't get damned for all eternity.

The five layers are:

This is a lot easier to write about than to do in practice because you'll be on a time limit that gets tighter and tighter each round you play. And with incoming bullets pulled randomly from the bag, you're not always going to be in a good space for these layers of thought. Leading to a lot of risk taking, sweaty hands, and asking: can I pull one more bullet? 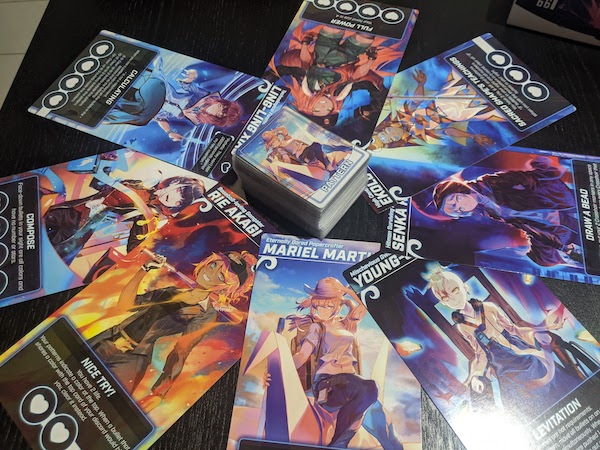 It's the combination of push your luck, and tactical pattern matching that keeps Bullet♥︎ never far from my playing table. Add on 8 unique characters, and 4 distinct modes of play, and you've got yourself a game that will stay on my shelf for years to come.

Bullet♥︎ absolutely succeeds at doing what it set out to do – to emulate a bullet hell style game. It’s quick to learn and play, with games lasting around 20 minutes. But has enough layers and addictive game play to make me want to play it more and more. The only knock against the game is using music for a timer. After playing 10 rounds in a row I’ve acquired a Pavlovian response where my heart rate spikes whenever I hear certain songs out in the wild.

May 28, 2021
Rating
4.5
Bullet
It's the combination of push your luck, and tactical pattern matching that keeps Bullet♥︎ never far from my playing table.
D
DavidNorris Top 50 Reviewer 10 reviews

The real-time aspect of this game appeals to me, but I just can't appreciate the anime settings that Level 99 utilizes. Just not my thing at all.

Ah_Pook replied the topic: #323834 09 Jun 2021 16:17
Yea the anime stuff is not my bag either, but it fits the shmup theme really well so whatever. Bullet is awesome though. I want to buy the expansion but their shipping is exorbitant from the lvl99 sure so I haven't yet. There's an expandalone sequel in the works too, but I don't know much about it behind it exists.

ubarose wrote: We've been having a lot of fun with Bullet. The Spawn was psyched that all the characters are female. She wants to try all of them.

I'd imagine this isn't the last we've heard of Bullet, the system seems endlessly expandable.

DavidNorris wrote: I'm fortunate to be a closet anime fan, so I kind of dig the anime pandering of their games.

I'd imagine this isn't the last we've heard of Bullet, the system seems endlessly expandable.

Bullet Orange is already up for preorder, its a licensed expansion that ties in with a series of japanese shmups called Orange Juice. adds 4 more heroines, and i believe releases in July. Bullet Star is currently in playtesting, and is a standalone expansion that I believe doubles the number of heroines and adds a lot more high complexity/weird heroines.

ubarose wrote: We've been having a lot of fun with Bullet. The Spawn was psyched that all the characters are female. She wants to try all of them.

I don't know what "otaku-pandering" is, or really even what a shmups is. Neither my daughter or I are much into anime or video games. Bullet is just a fast, fun game, with many cute yet powerful playable female characters, that, to our eyes at least, aren't over sexualized, that we can play together, and that my daughter feels comfortable playing with all her female friends.
Read More...