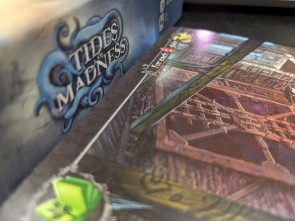 It's said that everyone has their price. Have you ever asked yourself what the price of yours is? A million dollars? Fame of a Hollywood movie star? Respect from your peers and colleagues? Achievement of mindfulness and enlightenment?

Well, what about four victory points?

Tides of Madness is a two player, eighteen card, drafting game that doesn't deviate too much from the familiar formula. You start each round with a hand of five cards. Then you pick one, play one and pass the rest to your opponent.

Each card is one of five suits in the game. When you play it, it gives you an end of round scoring objective. Such as: for each suit you don't have, gain 3 points, or 7 points for having majority in one suit.

While these are easy are simple to understand on their own. You'll be drawn into a web of confusion by the middle of each round, when you're surrounded by scoring opportunities on all sides. It creates painfully interesting decisions as you decide what objectives you need to prioritise, and which you can forget about.

It's not all about you though, as drafting to keep cards away from your opponent is equally important. The loving term for this technique being hate drafting. It adds an extra dimension to your decisions, but also makes this game a bit mean.

Tides of Madness is made up of three rounds. At the end of each, you get to keep one card permanently in play, and discard a card from the game entirely. This is a small change from drafting and allows you to create and break up any powerful combinations during that game.

It's this mechanic that allows the game to stay interesting over a number of plays. The cards in play each game constantly change depending on the draw, and the outcome of these exchanges.

If this all sounds great and you're super interested. Then this isn't the game for you. Instead you should pick up the precursor game Tides of Time.Tides of Madness has one more wrinkle I've yet to mention.

Did you really think we'd have Cthulhu inspired game without madness as a mechanic? 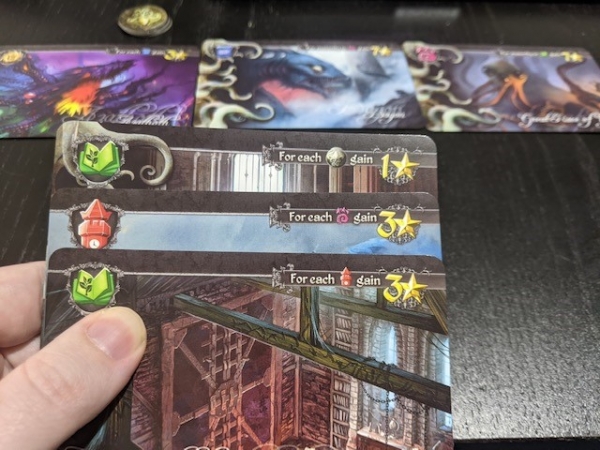 In Tides of Madness, eight of the cards have tentacles. Picking any one of these cards gives you a madness token that stays until the end of the game.

At the end of each round there's a madness check. If either player has more than eight madness. They lose. No ifs, ands or buts. Too much madness is bad, but what about a little bit of madness? What about a strange cackle every now and then? Well, that can be good. Very good. During the madness check, whoever has the most madness gets the choice to either heal one madness, or get four points.

It pays to be crazy.

If we go back to the analogy of all of the scoring objectives creating a web of decisions, then this madness mechanic is the big freaky spider sitting on top. It distracts you from creating the best combination of cards, because you always have to keep an eye on your madness. You don't want too much, but the four points each round is enough to tempt you to lose a bit of sanity.

As a mechanic, it's a great addition on top of an already solid drafting game.

Perhaps the one thing I didn't like about Tides of Madness was the end of round/end of game scoring. While the complex web of scoring objectives makes for great in-game decisions, trying to count them all requires a pencil and score sheet. It slows down the otherwise quick and snappy gameplay. It's as though you're driving down the highway and a massive Lovecraftian monster stomps across the road. Yes, eventually it'll pass and you'll get driving again, but for right now you have to sit in your car staring at your eternal doom. 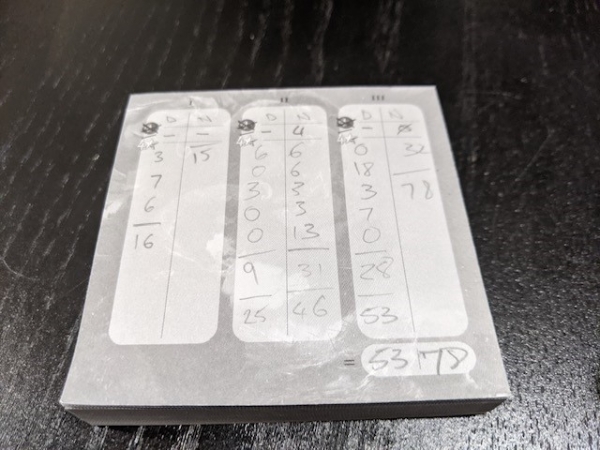 Not an exciting picture, but neither is end of round scoring

Overall, Tides of Madness is a good little game that rewards multiple plays. It does fall into a weird hole of being a two player filler game, and is often up against tough competition such as Hanamikoji, and Air, Land, & Sea. However, if you or your partner have fifteen minutes to spare. You can do a lot worse than sacrificing your sanity to the great lord Cthulhu.