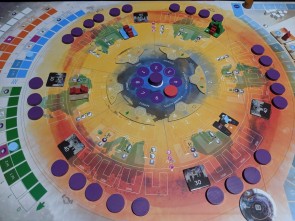 Before we dive into the review of the game, we need a second to admire the board. The bold use of bright colours is fantastic and makes the game pop, a stark contrast to the population markers which are dull and blackish. It's an aesthetic masterpiece, and my hat is off to Ian O'Toole for this design.

I talked about the patented Vital Lacerda formula, in my review for Escape Plan. Each turn, you must do one main action, but then you're able to do a number of executive actions. This is on full display in CO2: Second Chance. Each turn you must either propose a project, prepare infrastructure, or build a power plant. Then as executive actions: you can either move a scientist, visit the carbon emission permit (CEP) market, play a lobbyist card or claim a U.N. goal. 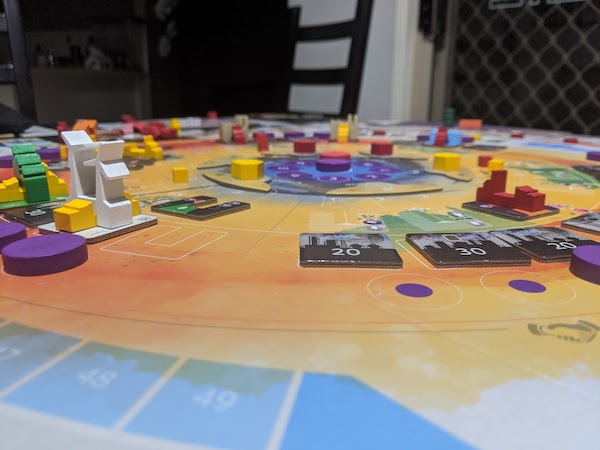 Written like that it doesn't sound too complicated, but each action is attached to its own subsystem. Like the CEP market which increases and decreases the price based on demand. Or proposing a project which changes the rewards of doing so based on the continent, and the type of project you propose. Each action has it's own rules and learning them will take you time.

Thankfully, CO2: Second Chance is markedly more cohesive than Escape Plan. There are a lot of rules and intricacies but, every system connects intuitively to the next one. Meaning once you get a handle on the main flow of the game, the rules melt away like butter on toast leaving you with a deliciously crunchy board game.

It's a tight weave, and figuring out how all these systems mesh together and how to best manipulate them is a deep and satisfying problem to solve. The game also heaps rewards on you for doing well. Be it giving you more victory points, reducing CO2 parts per million (ppm), research upgrades, or completing environmental, private or United Nation goals.

It's a sophisticated puzzle guaranteed to keep you engaged throughout its two hour play time.

Here's the big hairy but.

It feels like the cooperative aspects are tacked on.

Given it was only introduced in the second version of the game means I'm not entirely inaccurate. But goodness me did I hate the implementation of winning and losing. 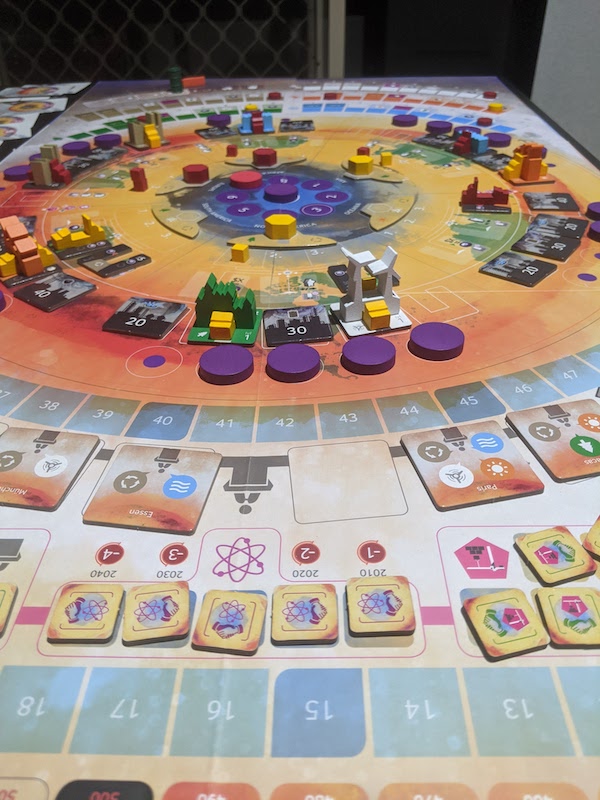 It's based on the ppm track, which loses you the game if it gets too high.

In case this bastardization of the theme isn't enough, to lower the CO2 ppm, you need to spend victory points. It's so jarring compared to the rest of the game, both thematically and in terms of gameplay. The end of the round transforms from this gorgeously designed puzzle into the Mathlympics where you get to figure out if you've won or lost.

Furthermore, the mechanic to introduce ppm is a random draw from a pile of tokens. These tokens can be 20, 30 or 40ppm. The difference between drawing a 20 and 40 is so catastrophic you might as well start packing up if you draw too many. It feels as though it boils down to a coin flip, which is at ends with the otherwise thoughtful design.

Also, this system of random draw doesn't or provide any sense of rising tension. If we compare back to Pandemic, your chances of losing increases as you get closer and closer to a win, creating these epic down to the wire wins. In CO2:Second Chance, you will have some good decades, some bad decades, but you don't know what the decade will bring until the end of the round. Heck, you may already be dead by the time you start puzzling. Which for a game requiring so much thought to do well, feels like a slap in the face. 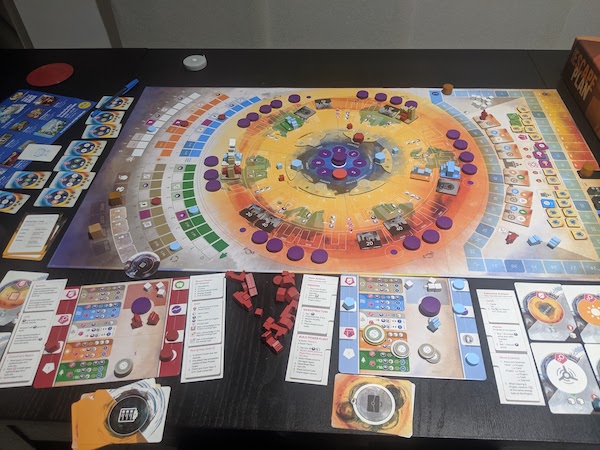 Aside from the win and loss conditions, there's something else pulling at me. The illusion of openness. Even though there are 3 main actions you can take each turn, you rarely get a choice on which one you're going to take. Each round everyone's total number of actions is 8, but it takes 3 actions to build a power plant. You need to build power plants to get points, and stay alive. Therefore 6 of your actions are predefined for you. While this choice gets front loaded into your planning, it is a little annoying that the game isn't as free flowing as you're led to believe.

If you're able to get over these grievances you'll find CO2: Second Chance is an incredible puzzle designed to do your head in, but also reward you greatly for your investment of time and energy. It gave me a glimpse into Vital Lacerda games, and why everyone gushes over him as a designer and his games. However, the greatest achievement of this game is its grim reminder of climate change, and how there's no easy solution.

If my games of CO2: Second Chance are anything to go by.

May 31, 2021
Rating
3.5
CO2: Second Chance
CO2: Second Chance is an incredible puzzle designed to do your head in, but also reward you greatly for your investment of time and energy.
D
DavidNorris Top 50 Reviewer 10 reviews