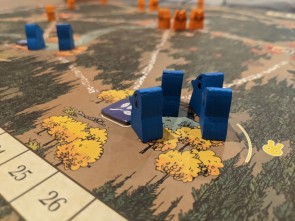 Being on board since the first Kickstarter I received Root in 2018. I loved the artwork, and the idea of animals fighting to rule the forest. I didn't get to play it until 2020. Part of that is me being lazy, but a bigger part is me being terrified of learning and teaching this asymmetrical game.

Root is a game where each player has their own set of mechanics. For instance, the Cats play your standard build, move, and attack commands common in these types of board games. The Birds however, have to be programmed, each round they have to fulfil a move set, and each round you can build on this move set. Instead of playing an army, the Raccoon is singular, slipping through the battlefield trading items with other players for points. Lastly, the Mice, who even though I've played them 3 times, I'm still not sure what they do.

Now, as game owner, it is my solemn duty to learn the rules of the game before everyone sits at the table. To ensure we have a seamless time playing. And when looking at Root, and the 5 different rule sets you need to learn, you'll feel apprehension over the amount you have to parse.

But it's not that bad.

A lot of effort went into making this game as easy as possible to teach, and it pays off big time. As while there are a lot of rules when looking at the whole, each individual faction is quite simple to play. And the individual rules you need to know for each faction are printed on the player boards already.

This helped me get over my apprehension, and I'm so thankful I did. Because it turns out I love Root.

It holds my favourite gaming highlight of 2020. Which I'll talk to later, let's first talk about why I love Root and it's forced narrative.

The way the Cats are built, they're always going to come out strong, and it requires the whole forest to keep them in check. The Birds on the other hand start weak, take time to get going, but when they do they steam roll everything. The Raccoon is trying to judge who's going to win, and pick a side to help, all the while helping themselves to every point they can get their cute but dirty little hands on. Finally the Mice, pop out of nowhere and then do something, I'm still not sure what.

Because these factions are built this way, it creates a story for each game. The Cats start off as the villains, and at the beginning of the game the plot revolves around working together to thwart their efforts. But as the game progresses and the point leader changes - so does the villain of the story. Will it be you who rises to the top? Or will you find yourself at the beck and call of another villain. This story with all its twists and turns, heroes and villains, is what makes Root incredibly engaging to play. 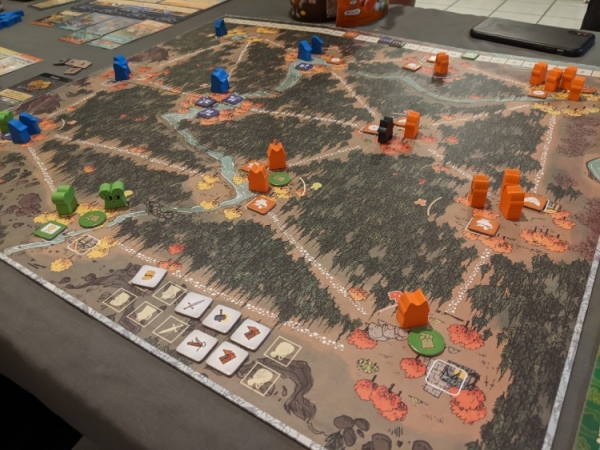 The map mid game the Marquise is on the backfoot, being aided by the Vagabond.

Mechanically, each faction is quite straight forward with two to three simple ways of scoring points. The game is figuring out the quickest way to get those points, and the best way of stopping opponents from getting points in a complex and evolving environment.

However, if you're finding that you can't keep up with the winners, you can always try your hand at Dominance cards. These cards allow you throw away the victory condition of getting to 30 points first, and instead bet the table that you'll own three specific areas by the start of your next turn.

Back to my highlight of the year. The Cats domination of the forest was beginning to wane, but they were still really strong. Realising their time was coming to an end, they put down a Dominance card. The whole shape of the game changed from trying to hinder all the players enough for me to get ahead. To holy crap we need to skin that Cat! It took the Bird player and I everything we had and an edge of your seat dice roll to stop him.

I went on to lose the game, a long with the Cat player, but it was a magical experience, and one I won't forget in a while. 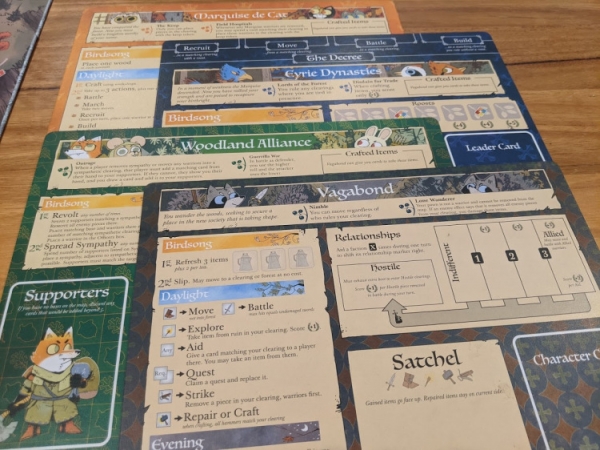 All of the factions found in the base game of Root.

My other plays of Root haven't reached the same heights, but they've always been incredibly engaging. Both as a player wanting to win, and as an observer watching the control of the forest flow from one player to the next. Root is a brilliant game, and one I've done a complete 180 on. Instead of being afraid to get it to the table, I now want to get it to the table every chance I get.

June 03, 2021
Rating
5.0
Root
Root is a baby's first war game. It has cute creatures, asymetrical powers, and an EPIC story to tell. Well worth your interest, and your time to learn all the rules!
D
DavidNorris Top 50 Reviewer 10 reviews

TerryONeill replied the topic: #324897 24 Jul 2021 06:43
A really enjoyable read. Thank you! This sort of reminds me of Food Chain Magnate with its twists and turns. I love games with this high level of interaction and I also love games with less interaction but in which players have more control (I'm enjoying Gaia Project right now). I love both of these things but they make for very different types of game!

They are the miscellaneous animals too small and too scattered to be a force… in the beginning.

Then, as others trample over these poor oppressed creatures’ territory they start to generate Outrage and begin thinking “enough is enough” and ambush in force and/or bring forward a few powerful warriors they can muster. They are the gorilla warfare faction in the game.

Agent easy wrote: They are the gorilla warfare faction in the game.

I thought you said they were small? (Sorry, couldn't resist).

I've been flirting with Root again after those early sessions with some of the other people on F:AT( in what i think must have been the before times! wow) thanks to the app. It is good.


I think my problem with the Woodland Alliance was I played too passively. I didn't want to be the first to start the war of the forest - puts a target on your back.

But really you want to start spreading your supporters whereever people are going to be. So that they give you more supporters!

I found the concept of everyone playing by a different ruleset a bit dis-unifying, like the three of us were sitting at different tables. It's sold as a big plus for the game, but I'm not sure it came without a price.

Am I the only person that feels this way? Maybe it's a first-play thing.

Gary Sax replied the topic: #324963 27 Jul 2021 14:53
It also depends on the factions involved. Vagabond has a big sense of playing a different game, Woodland alliance also has a little disconnect. A lot of the other factions have different engines but are playing a pretty similar area control battle game. It's why I'm somewhat ambivalent to the vagabond being in the base pack.

Jackwraith replied the topic: #324964 27 Jul 2021 17:13
Can't say that I'd recommend playing the Riverfolk for your first game, either. They take some familiarity with the deck and other factions so you really know how to sell your cards to the other players. It also helps if you're good at selling/table talk in the first place. I'd probably stick to the Marquise, the Eyrie, and the Alliance for a three-player game with a first-timer(s). That way, it will play out more like the wargame that it is, without having to absorb the variations to the rules presented by the Vagabond, Riverfolk, Lizard Cult, etc. Root is already often a challenging first play and your reaction isn't unusual, Sag.

Sagrilarus replied the topic: #324965 27 Jul 2021 17:20
I seemed to get the hang of it (but yeah, some of the text instructions on cards and the like could use a rewrite) but it just didn't feel like I was competing with the birds or the cats. Granted, they were paying me plenty to use my otter soldiers (apparently otters can be soldiers . . . and can be bought) but it just felt like three people playing different solitaire games at the same table. The comradery was there, but not the "a mile in your shoes" sort of catharsis you get from other games.

You don't look at one of the other players and think "this is what I'd do" in a game like this as much as you do in more symmetric titles.

Gary Sax replied the topic: #324967 27 Jul 2021 18:33
Root can be pretty cutthroat. The area I absolutely agree with you in, I like Root but don't love it like Oath which is more bareknuckled, is that it takes a pretty experienced eye to tell you who you should be beating the shit out of at any moment.

The Vagabond is a great example. It is, technically, by far the most explosive and scary power in the initial four as the game gets later. But that isn't obvious. Among super experienced players people beat the shit out of the Vagabond every time there is an opportunity early, dropping everything to do so if they're in your clearing. But that isn't obvious unless you're good and also they're good so you know they'll be able to make it explode.
Read More...