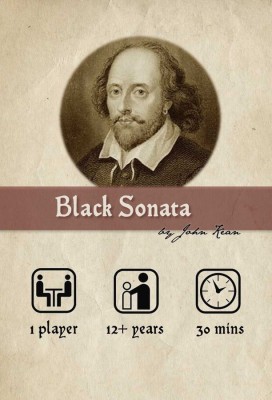 Shakespeare, right? For so many kids his plays were compulsory study at school, and he had a way of making me feel I don’t understand my native language – English. Did you know though, that he wrote about a mysterious ‘Dark Lady’? Far from the romantic language people associate him with, it got downright bawdy, talking about his ‘nobler part’ rising and falling. Wink wink, nudge nudge. Black Sonata puts you in London in the early 1600s, tracking down this elusive temptress and trying to determine her true identity.

The way the game works is like nothing I’ve played before. On every turn you’ll reveal a clue card which tells you the sort of place she’s been spotted at. The clue is an icon, which matches several locations on the board. You can pop your dark lady markers on those spots, then on the next turn, the next clue shows you where she went. Some of those new places will have been impossible to get to if you started at some of your marked locations, so by applying some logic, you can start to guess where she is.

The theme and aesthetic is beautifully represented throughout the game, with quotes from the bard himself, and a really interesting book is included, explaining who each of the potential dark ladies really was.

Once you’ve got a good idea where she’s going, you can move your pawn across London to attempt to intercept her. Sometimes there might only be one logical location, sometimes you’re guessing between two. If you want to search for her because you think you’re in the right location, you get to use one of my favourite mechanisms in any game I’ve played. 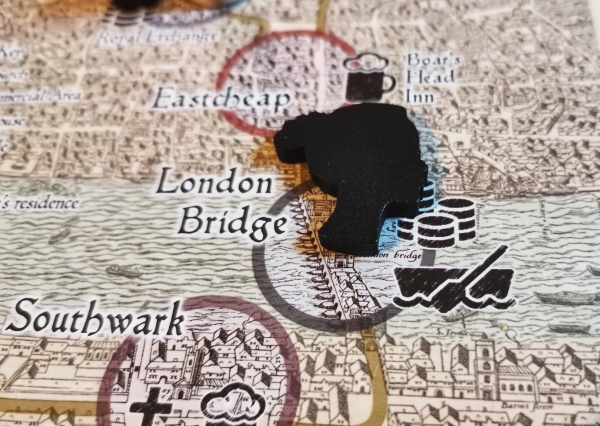 This token tells me she might have been at London Bridge, but the symbols there may be on another location too.

You take the location card matching where your pawn is, then overlay the clue card. The location cards all have a small hole cut in them, and when you flip the pair of cards, hopefully you’ll have a small, black silhouette of the lady visible through the hole. If that happens you reveals a new dark lady clue card, which helps with your final deduction, and then she slips off into the night again, like a wisp of smoke disappearing into the fog of London’s streets. 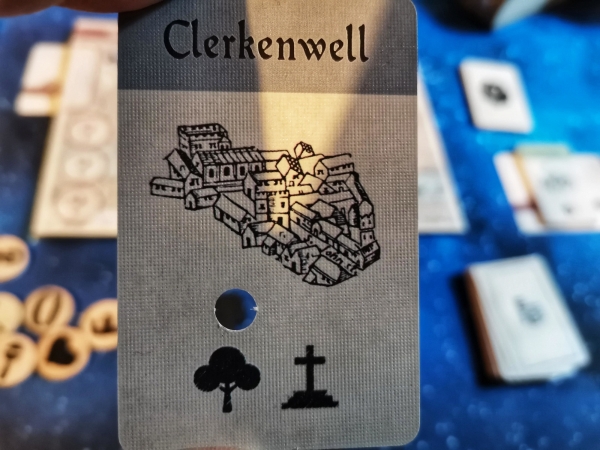 One of the clue cards and its little spy-hole. The cards are made of really good-quality stock

Then, the hunt continues. Much like Palm Island, there’s a countdown card in the clue deck, and every time it comes to the top, it’s flipped or rotated to give you a countdown until the game’s over. You need to make your grand unveiling before that happens, and you’ll only be able to safely do that if you’ve revealed enough of the dark lady cards to make your deduction.

My brain is more broken because of my trying to understand how the game works, rather than try to solve it. The game can only work if the cards are stacked in a logical order, so that she genuinely moves around London without teleporting. With that in mind, you’d think the game gets easy. Just remember the order of the cards, right?

There are at least eight different ways to stack the deck, and every time you play, you’ll cut the deck at a random place to start. Plus, when you discover the dark lady clues, you move ever-increasing stacks of cards from the top to the bottom of the deck, so whole chunks are skipped. And somehow, it still works. John Kean, the designer, is either a wizard, or a very clever person, that’s all that I know. How this ever came to be, is a mystery to me, and this is a print-and-play game that got published too, so it’s not coming from a big design studio. 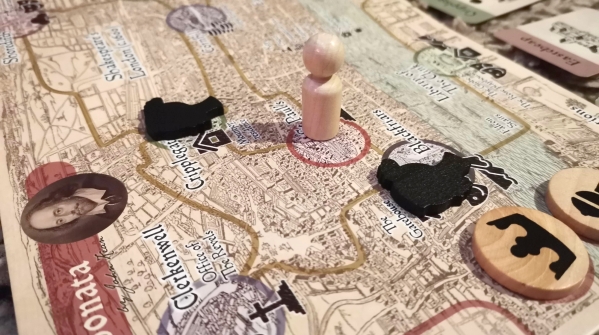 My pawn faces a choice here – follow the trail from Cripplegate on the left, or Blackfriars on the right.

At the end of the game when you decide to try to guess the identity, you use the collected clue cards and try to employ some logic skills to figure out which three of the seven characteristics she must have. Then you do the big reveal and find out if you’re more Holmes or Clouseau in your detective work.

I can’t fully express how impressed I am by Black Sonata. It’s an amazing game. It’s a board game and a mystery deduction all in one box, and those are my two favourite things. I don’t know how the logic and maths behind the game works, and I don’t want to lift the curtain and see. It’s a bit like a magic trick, you think you want to know how it works, but once you know, it’s ruined. Suffice to say, I think it’s genius.

It’s such a gorgeous puzzle in a little box, and even though I know that the longevity is theoretically limited, due to the limited ways the deck can be built, it doesn’t feel like it. There’s so many things thrown into the mix, which make it near-impossible to remember all the setups. These include fog cards, which both obscure your view of a location, but also give you an expendable bonus. That bonus can do all sorts of things, including swapping the identity of the lady you’re seeking. Unless you sit there with a notepad and pen, meticulously plotting every conceivable route – which you could do – you’re not going to wear the game out any time soon.

Black Sonata is a solo game, but you and another could talk through the clues and make deductions if you wanted. It’s got a tiny footprint, and plays out inside an hour, so it’s a real Martini game – any time, any place, anywhere. There’s an expansion I don’t have yet, but will definitely buy, just to keep this marvellous game alive longer for me.

If you enjoy logic puzzles, mystery, and deduction, Black Sonata is the easiest recommendation I’ll ever make. It’s absolutely brilliant, and if you can’t find it in stock anywhere, you can print your own copy right now.

A review copy of Black Sonata was kindly provided by TGG games. Thoughts and opinions are my own.

June 07, 2021
Rating
4.5
Black Sonata
Black Sonata puts you in London in the early 1600s, using logic and deduction to track down Shakespeare’s elusive temptress and to determine her true identity.

I love the feeling of satisfaction when you gamble on where you think the next move is, and you're right. I just don't know how he ever came up with the idea of the way the cards all work together, it's serious magic.
A
adamr 1 reviews

I love the feeling of satisfaction when you gamble on where you think the next move is, and you're right. I just don't know how he ever came up with the idea of the way the cards all work together, it's serious magic.
Read More...