Mysterium - Gone but not Forgotten 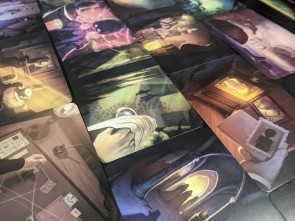 Getting ghosted has never been so much fun!

Halloween every year is a time for dress up, candy, and Mysterium reviews. Bucking the trend, here's a review of the spooky board game in June!

So you've been murdered

Mysterium is an asymmetric cooperative game where you either play the vengeful ghost, trying to lead other players towards your killer. Or one of the 'psychics,' trying their hardest to help the police and avoid being busted by James Randi.

As one of these psychics, you'll be looking at a board of suspects, locations, and murder weapons. You'll be guided by the ghost who'll provide clues as to how to narrow these selections down. With each psychic having their own combination of suspect, location, and weapon they need to guess.

Whenever you're not attempting to discover your own combination. You're placing bets on the other psychics at the table. Either saying you believe they got their vision correct, or they're a big fat phony.

As the ghost, your toughest challenge is shutting up and watching these amateurs work, as you're only allowed to communicate with them through vague picture cards. Expect to hand over the perfect clue, and then sigh heavily as the 'psychic' discusses some minute detail on the card you didn't notice.

After seven rounds you'll either find out who the killer is, or it's game over and you end up being double dead. 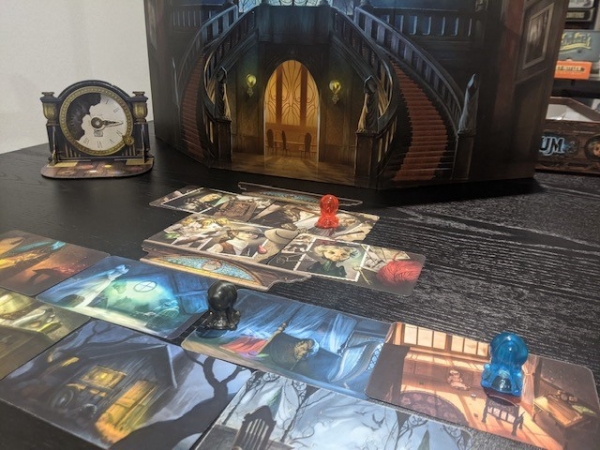 Mysterium isn't a complicated game, and almost all of the legwork required can be done from the ghost role. Making it an excellent choice for introducing new players into our hobby.

The artwork on the vision cards is beautiful, macabre, and will distract you from your task through awe. The rest of the artwork isn't too shabby either, and really buys into the graveyard/haunted house feeling.

The fun of Mysterium is trying to overcome this tiny little obstacle called death by communicating through these picture cards. Getting inside another players head, and understanding what they're thinking is usually associated with competitive gaming. Doing this cooperatively creates new interesting ways of thinking.

As the ghost, you're challenged to connect abstract picture cards, with a non-abstract objective card. It's a satisfying challenge all on it's own. Sometimes you get lucky, and are able to match up colour palettes, but it can be anything. Whether it's details on the card, or how the suspect looks, or where you'd most likely find the item. Trying to come up with the most obvious solution, when there are no obvious solutions, is fun and so is the instant feedback from your friends.

But when you connect and get the right outcome you feel like you've worked together to achieve something. There may be some high-fiving. Getting it wrong may cause some frustration, but there's also the hilarious moment of realisation where the clue giver gets to go 'It's the fish! There's fish in every card why didn't you pick the fisherman!' Followed by 'Fish! there's a friggin giant needle right here! It was obviously the seamstress.' 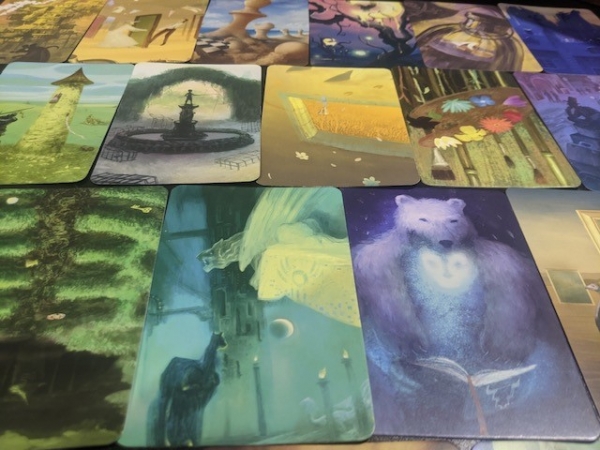 What's so bad about being dead?

Mysterium is an awesome game but terribly unrealistic. In the real world by the time you set up the game, your murderer would have had enough time to flee the country. It's not that long, but is abnormally long for a game this light. It can be forgiven though, as this was normal 6 years ago. These days, there's a lot more competition in the space, and I've found myself gravitating to other games for this reason.

Once you're in the game though, it's a fantastic experience. With one exception - the second guessing mechanic. Placing an 'I don't think you got this right' token next to someone's guess doesn't sit well with the cooperative nature of the game. You're wanting everyone to succeed, and betting against them feels mean.

Not to mention it introduces a bit of unnecessary bookkeeping between rounds. For an otherwise streamlined game, this overhead sticks out. Because of this, Mysterium is the only game in my collection I house rule.

The only other thing to keep in mind is replayability, as after you've played few games, you'll want an expansion to add some fresh faces to the suspect pool. 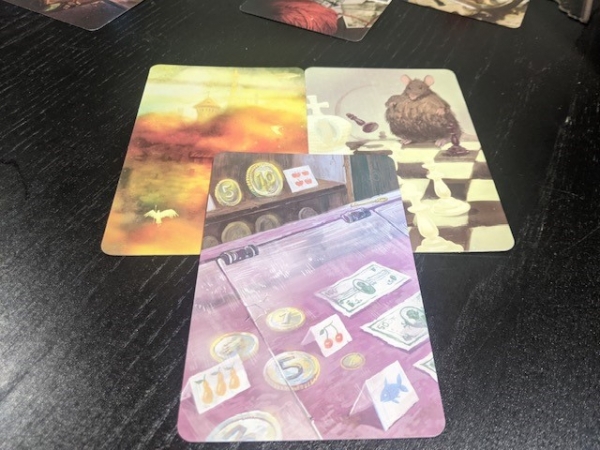 There's two expansions for Mysterium, which are Mysterium: Hidden Signs, and Mysterium: Secrets and Lies.

Hidden Signs is adds another 78 cards to game meaning more vision, suspects, locations, and weapons. It helps with the replayability as the chance of getting the same combinations goes down. With no changes to the gameplay, this expansion is only if you want more vision and objective cards.

Mysterium: Secrets and Lies adds more cards as well, but also it replaces the murder weapons with motive cards. These cards depict why you were killed, from a lost horse race to being sacrificed in a secret meeting. These cards are grisly, and if you're playing with children I wouldn't recommend them, but they really build upon Mysterium's theme. It also ups difficulty just enough for it to reach the not too hard, not too easy sweet spot. It's a great expansion that I'd recommend if you have the base game. 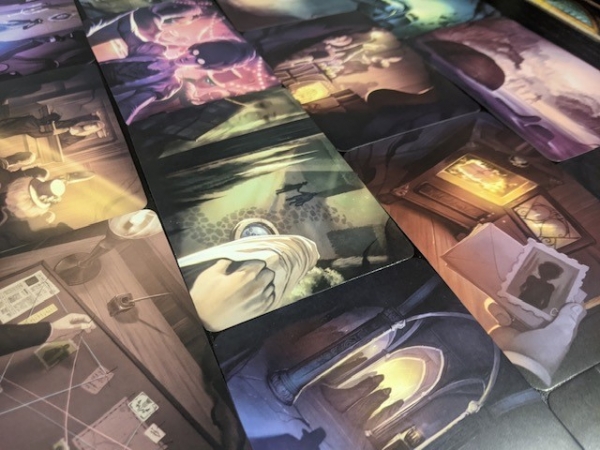 Will I see you again?

Mysterium has been a household name for a long time, and for good reason. It's easy to learn, easy to play, it looks great on the table, and it's the cooperative version of another great game: Dixit. However, like Dixit, we're well past the prime of Mysterium, and these older games have been surpassed by new and improved designs. Therefore, it's harder to recommend Mysterium in 2021, as I believe there are better options out there. On the other hand though, it's one of my most played games from over the years, so if you end up with it on your shelf, You won't regret it.

June 13, 2021
Rating
4.0
Mysterium
A Halloween classic that gets overshadowed by newer games. Still it's a great time, and a great introduction to modern board games.
D
DavidNorris Top 50 Reviewer 10 reviews

Nodens replied the topic: #325310 07 Aug 2021 13:45
Thanks for an enjoyable read with a lot of useful information. Having pondered getting the game a couple of times, I feel you gave me some good pointers.
You mention twice that there are other games you see in that same spot and maybe prefer to this. I'd have liked to know which games those are and/or why.

A couple of games I'm enjoying a lot in the same space as Mysterium, are Detective Club, Deception: Murder in Hong Kong, and Mysterium Park.

They all have their pros and cons, but overall I prefer the shorter games with more emphasis on fun.
Read More...