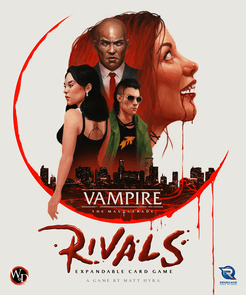 A card game designed to encompass a massive social interaction that doesn't leave room for or create much interaction at all.

Vampire: The Masquerade is an RPG setting that is borderline legendary among longtime aficionados of that type of game. White Wolf approached the concept of an RPG as the polar opposite of what Dungeons & Dragons was at the time; a massive compilation of tables, numbers, and finely-detailed rules that often dictated exactly what could and could not happen at any given moment in your fantasy adventure. Having the right "system" was a paramount goal for many RPG designers, somewhat similar to how board game mechanics are viewed by many today. White Wolf jettisoned almost all of that, providing a fairly cursory combat and interaction system for those who depended on such things, but mostly encouraging both GM and players to focus on story over spreadsheets. Their World of Darkness was largely successful, I think, because they provided such a rich setting that wasn't constrained by how much damage someone could do with a fireball or how many otyughs was considered a proper challenge for a party of X level. WoD was so rife with characters and organizations and odd/malevolent forces that it was easy to be entertained just by reading their game manuals, without ever putting a game together with other people. So, it's a natural inclination, I think, for designers to attempt to translate that rich setting into other media; presenting an opportunity for others to experience the world of the Camarilla and Sabbat and their associated allies and enemies. Vampire: The Masquerade - Rivals is one such attempt. Unfortunately, I think Dan Blanchett and Matt Hyra lost touch with White Wolf's original philosophy, as they and Renegade Studios have produced a game that is very heavy on mechanics for a game of its size and suggested playing time, but largely lacking in a compelling story. 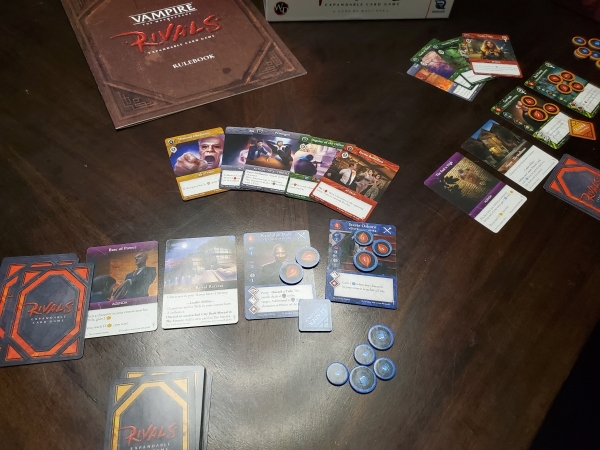 Rivals is an expandable card game, which means that there's a base game and there will apparently be expansions that bring new cards with which to alter/upgrade your decks. The base game comes with four pre-made, 40-card decks for clans Ventrue (elitists), Brujah (rebels), Toreador (artistes), and Malkavians (crazies.) Each clan has a combat focus that its vampires tend to lean toward (Brujah are physical combat; Toreador are social combat; etc.) and for which its deck is largely built around. But there's also a secondary focus for the Toreador, Ventrue, and Malkavians, each centered around a distinct mechanic that attempts to incorporate the social interaction angle of the game; Schemes, Titles, and Conspiracies, respectively. The Brujah, being Brujah, are mostly just interested in beating on the other bloodsuckers. In each player turn, a City card is drawn, revealing new victims on the streets or an event that changes the game conditions for an entire round of turns. Each player then has two actions, ranging from drawing cards to playing cards to attacking other players. There are multiple ways to win, which is always appealing, as in most games with that approach you can have players engaging radically different strategies within the same game. Think of it as a broader variation on the buzz phrase of the moment in the game world: "asymmetric play." The major downside to Rivals is that none of those strategies feel exciting or interesting to execute.

In contrast to the extremely rich setting, almost no action one takes in Rivals feels impactful. Everything has been reduced to numbers. What sets one vampire apart from another is based on numbers: damage, health, influence. There are very few characters who possess an ability that marks them out as something other than a pile of statistics with a name attached. Consequently, most actions in the game feel like you're simply lining up a bigger pile of numbers than your intended target. That makes most of those actions feel inconsequential and, thus, not particularly interesting. This is especially true in the early game and for new players, where you're staring at the plethora of options and mechanics and not feeling like any of them seem either positive or, for that matter, fun. This is perhaps most pointed with Toreador Schemes and Malkavian Conspiracies. Both of them are dependent on social interactions that are zero-sum. You either agree to go along with what's being suggested to you (and maybe gain from it) or you don't. But a good number of said cards are largely useless (healing characters that aren't wounded; subtracting victory points from opponents who have none or not enough; etc) in those early stages, so they contribute to that feeling of not doing anything particularly important or interesting that doesn't involve feeding on the citizens of the Bay Area. On that latter note, I had more than one player point out the indelicacy of the labels applied to these vampire victims ("Vagrant", "Addict"), which might indicate that Renegade could have been a bit more socially-conscious when it comes to modern sensibilities. The premise of Vampire: The Masquerade always involved the title creatures in positions of power and the treatment of humans as servants at best or food at worst, but in trying to move society away from contemptuous attitudes about the less fortunate, it's worth considering that they could have done better here. But they also could have taken a moment to question whether all of these systems (4 different kinds of combat, Intel/Secrecy, Influence contests, Schemes which are really another kind of conspiracy or influence contest, etc.) were crucial to the game's function. 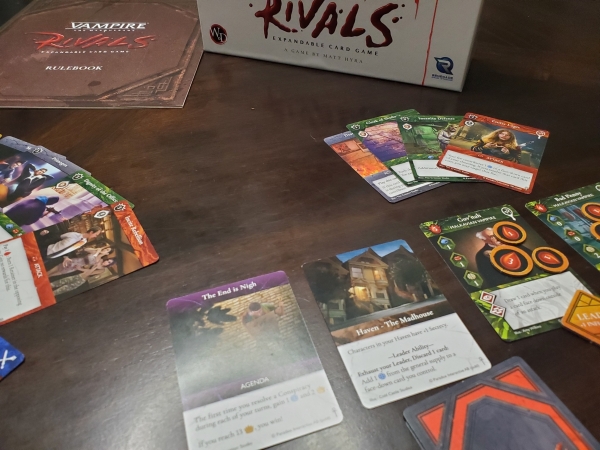 You can win a game with 13 Agenda points. Each player's Agenda is something nominally attached to their clan identity (Knocking other characters into Torpor for Brujah; gaining Titles for Ventrue; etc.) But you can also score Agenda points simply by feasting on those various mortals who show up on San Francisco's streets. That means that, in what is ostensibly a socially-driven game with direct combat, you can potentially ignore everyone else at the table and still find victory. In fact, the Agenda included with the Toreador deck is predicated on doing just that, since they score points for having the most retainers (e.g. Citizens attacked and converted to servants.) But even more problematic, two of the other Agendae are based on those cards (Titles, Conspiracies) that already feel clunky; one because achieving Titles is a whole other layer of mechanics (Influence) on top of a game that already seems heavy with them and the second because Conspiracies involve draining one's own primary resource (Prestige, which controls whether you can recruit more vampires and causes you to lose if you run out of it) for goals that aren't especially compelling or effective. It's worth mentioning that most socially-driven games often need either a certain type of player or, at least, some experience with the game to move it forward as it should be played. Rising Sun is a great example of a game where negotiation and diplomacy improve markedly as people begin to understand that alliances can mean more than simply getting a mandate bonus and that almost anything can be bought. The same potentially applies to the Schemes and Conspiracies of Rivals, but the freewheeling nature of most social games is at odds with the way those two mechanics are built. Again, those cards are zero sum. You're either with the promoter or you're not and the goals of those actions are, again, often so narrow that there doesn't seem to be much benefit to players who aren't Toreador or Malkavian and, thus, no impetus to cooperate. 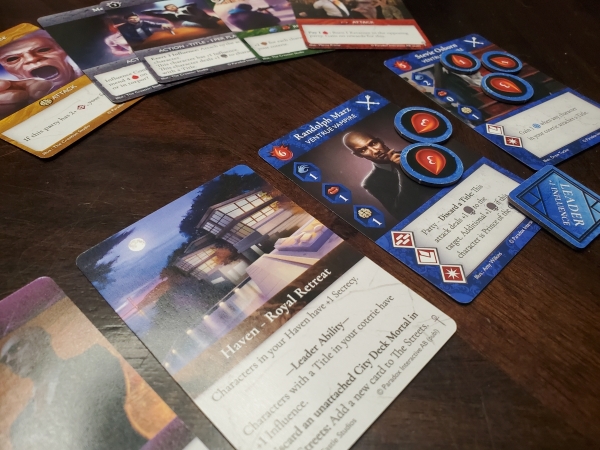 The whole package strikes me as a game that attempted to apply laws to the lawless. They tried to take a very loose storytelling system and incorporate hard and fast rules to it, such that the more esoteric examples of an RPG are embodied in mechanics of limited application and interest. It seems to try to take stories that could be enormously interesting if they played out over weeks or months, but seem stilted and artificial when played in a 45-minute card game. I'm certainly willing to concede that this game simply may not have worked for me, but we tried several games at 2-, 3-, and 4-player counts with a variety of gamers (Euro fans, DoaM fans, MTG fans) and none of them came away from the game with a positive impression. Consequently, neither have I. While I enjoy the setting of Vampire: The Masquerade - Rivals and I appreciate the ambition of the designers to try to encapsulate a sprawling RPG into a card game, I can't say that I'd recommend it.