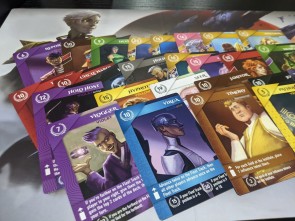 Whenever Jamey Stegmaier releases a new game, it's an event. Love or hate his designs, you must respect the amount of passion and production he puts into his company and his board games.

Imagine you're in the produce section, and you've picked up 5 tomatoes, but you notice one has teeth marks. Gross. But that's OK, return it and get another one. Now you notice another one is still green. You exchange that one too. These 5 tomatoes now look great, except for this last one.

It's only giving you 10 victory points.

You start the game with a hand of five cards. These cards have a base victory point value, an action when you play them, and an end game objective, which if you complete, gives you more victory points.

On each turn you'll play a card to a location on the board, use the card's action, and pick up another card from different location. Gaining the benefit of the location.

Of the four locations you'll either pick up the sovereign token, or gain a resource: helium, influence, or fleet track advancement. All of these increase your score in various ways, but their main purpose is to drive you to the end of the game. Because when someone gets 7 of two, or 3 different people get 7 of each, then after you ensure everyone has the same amount of turns; the game is over.

That's everything you need to know, as all the complexity of Red Rising is in the card's abilities, and end game objectives. 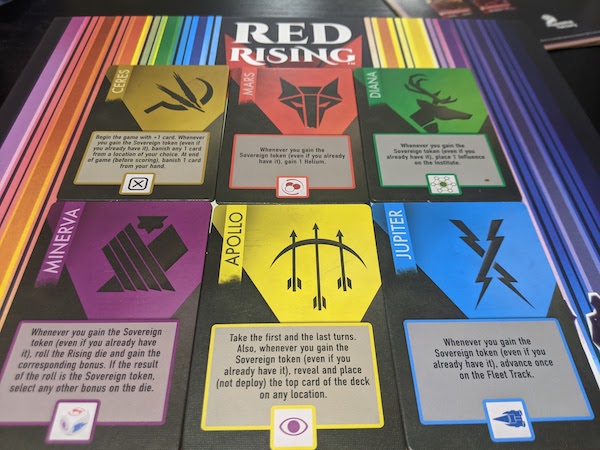 Usually in combo building games you start with a hand of cards, and don't really know where the future is going to take you, or what combinations will be revealed throughout the game. Red Rising dumps these card combinations on you at the start like a dinner plate from an angry 1950's housewife. Creating an initial pause at the beginning of the game while everyone figures out all the cards they're holding, and those on the market.

From then on, the game flows.

It's like those stories where someone starts with a paperclip, and over time they keep trading up until they've got a car, or an office space. Where each card in your hand you're evaluating it against what's in the market. There's a lot that goes into this decision. The main one being whether or not the card will give you more points.

Sounds easy, but isn't so straightforward.

This is such a captivating decision to make, and you're making it for every card in your hand. It's laden with risks and your answers change frequently based on the state of the board. It also makes you feel great because every time you act on your decisions it feels like you're trading upwards. 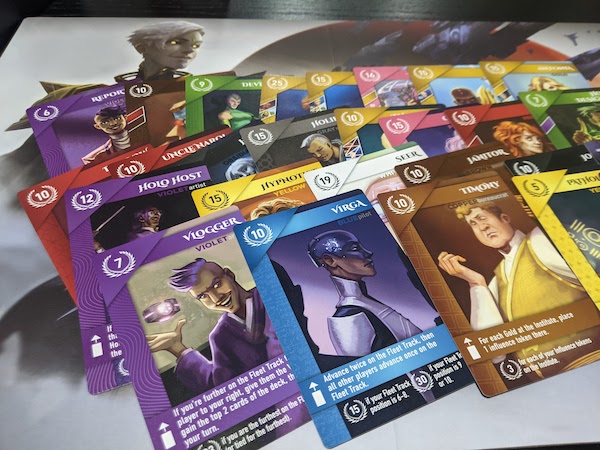 I've traded up, now what?

You've entered the worst part of the game.

When you don't want to remove any cards from your hand. You are able to spend your turn drawing from the deck and placing a card on a location to take its action. This puts you one step closer to the end of the game, but it's terribly boring compared to the fun you were having less than 10 minutes ago. It's more than likely you'll be carrying out this type of turn for several rounds before end game is finally triggered.

It's then, and only then, that you find out how well you actually did.

I pinged Concordia a few weeks back because it provides no feedback on your moves. Red Rising is so much worse in this regard. Yes, you can tell if a trade you've done puts you in a better position. But with everyone else's hands hidden, there's no way of knowing how well you're doing against your opponents.

And you know I hate that.

This lack of transparency makes interactions between players feel unintentional at best, random at worst. If we take the example of the Reporter card before, someone else might interfere with that objective not because they know I have the card, but more likely because they have another card giving them bonus points for helium.

These incidental interactions left me wondering why I bothered playing the game with other people. It seems their only purpose is to put the game on a timer, and to affect a few of the objective cards.

Combine these problems with the random starting hands which can catapult or cripple your score, and it feels strikingly similar to Tapestry. Where the enjoyment comes from seeing what you're capable of doing, and if you try to play competitively, you're going to have a bad time. 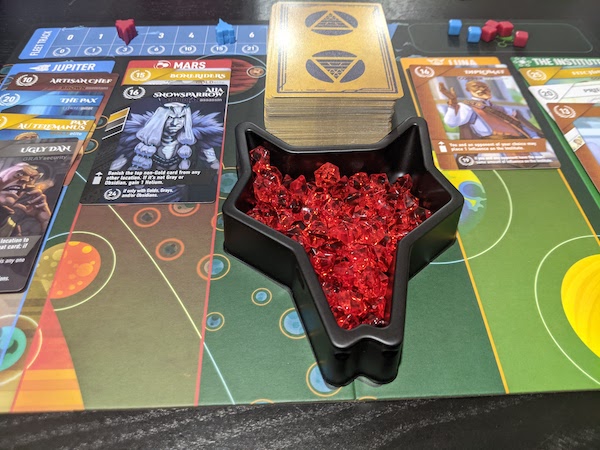 It's a Stonemaier game

Unfortunately, because it's a Stonemaier game, the critics are already coming out of the woodwork. There's a lot of animosity towards this publisher purely because of their popularity, and how safe the designs are. Their catalogue never pushes the envelope, but are always good, well produced games.

I've already read some pieces which make a big deal of small issues. One of these gripes is the size of the deck. Which oddly enough, is something I enjoyed. The cards that came out of the deck shaped the game. And because of its size all of my games had a different flavour, where in some we would be battling for influence, in others we were card starved as the market got discarded.

That's beside the point, which is despite what's being said. Red Rising is another good, well produced game from Stonemaier Games. But those expecting something different, and something more, will be found wanting. 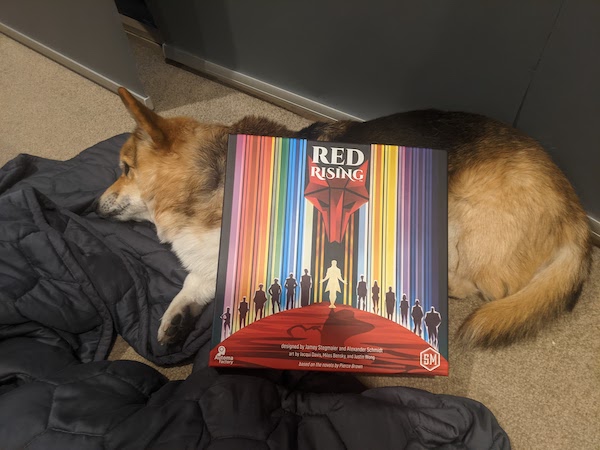 June 23, 2021
Rating
3.0
Red Rising
The back and forth trading with the marketplace is incredibly fun, but it's let down by the lack of interactivity between players, the boring end game (for some), and randomness of the starting hands.
D
DavidNorris Top 50 Reviewer 10 reviews