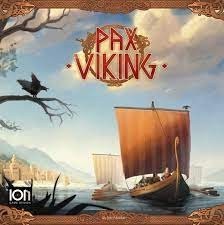 Our popular culture’s understanding of antique Scandinavian culture is nothing if not subtle.

This fervent embrace of the ‘Bathory album cover’ end of this spectrum is perhaps nowhere better exemplified than in the realm of tabletop gaming, where possibly the most prominent proponent of the theme labours under the moniker of …Blood Rage.

Whilst one can’t deny they were certainly up for a bit of cleaving, there’s infinitely more to the Viking age than Lindisfarne Massacres and tits. Leave it to the venerable ‘Pax’ series then to explore a more nuanced take on our Nordic cousins, but one that will still probably compel me to make a bunch of jokes about moose paste as we proceed.

One Rode to Asa Bay

Coming off the back of the sublime 2nd edition of Pax Pamir, Viking emerges in the shadow of an accessible yet Mariana-trench-like affair that welded its theme and historical trappings to mechanical conceits with an artisan’s flair. And whilst it can’t quite lay claim to that level of polished certainty, it nonetheless successfully strikes out for new territory, steering its longboat into uncharted waters for the series, and presenting an even more accessible, yet no less satisfying take on the Pax formula. 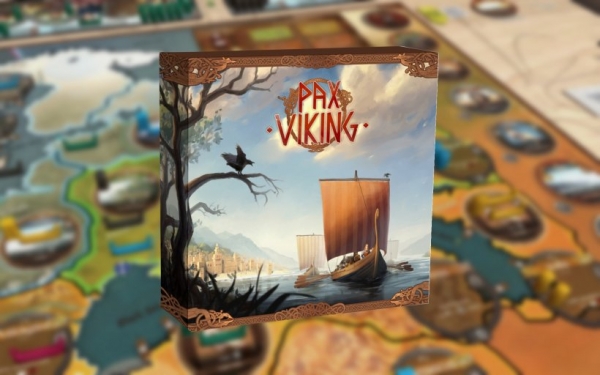 The primary difference here is one of scale, both conceptual and physical. Previous games in the series have wont to be more conceptual affairs, more abstracted in their representation of the events they portray. Viking immediately eschews this trend by offering an expansive board that jettisons the political manoeuvring of old in favour of a geographically tilted focus that, at least initially, more closely resembles a traditional ‘heathens on a map’ type deal.

And in part, this is not an entirely erroneous impression. It’s by grafting onto this foundation the Pax staples of myriad shifting victory conditions, market emphasis and interconnected systems that it ascends to something more intriguing.

Set in the 10th Century, Pax Viking represents a period when the Vikings gazed eastwards, seeking trade and influence over Persia and the Black Sea. If the distance between us and the events portrayed renders the historical context here a little looser than in some other Pax titles, at least we are spared Phil Eklund’s interminably bad-take footnotes throughout the manual spruiking the dubious merits of free enterprise.

The areas under Norse control at this point in history were massive, and as various Jarls pursued their individual ambitions, and the spectre of clean-shaven Christianity stalked the land, the opportunity arose for a powerful leader to unite the various Jarldoms of Norway, Sweden and Denmark into a unified country. 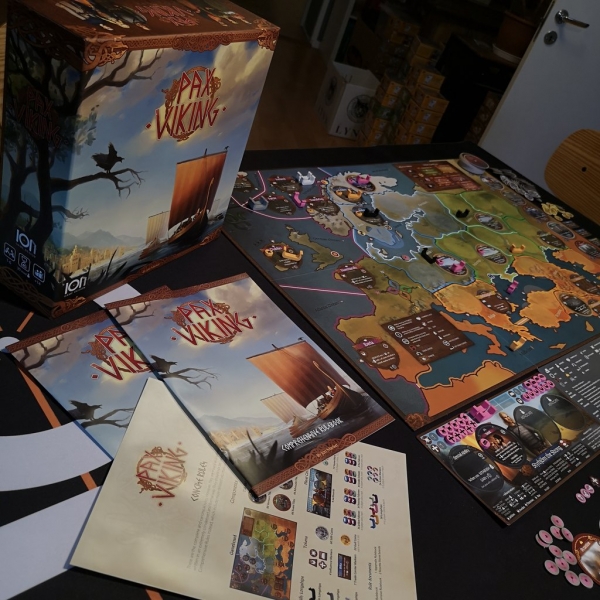 He had come with strange men in armour, dressed in purple shirts and lace

That’s where you come in. One to six players will select from a handful of leaders, each differentiated by a unique player power, that seek to straddle the map with their forces, leveraging the most practical combination of trade, political influence, theological sway, and brute bearded force to emerge as the dominant faction. Along the way they’ll have to forge alliances with both powerful centres of trade and the fleets of sister nations, all whilst keeping a slitted side-eye on the machinations of their adversaries, and crucially – remaining flexible in their approach, as the state of play evolves, and victory conditions writhe mercurial in response to events.

For all its potential depth, the actual mechanics are simple to parse. Most routes to glory revolve around some variation of seeding your influence upon the disparate locations depicted, and then ensuring the survival of that influence against the encroaching entreaties of the other players.

This influence is divided into four areas, representing Jarldom, Sweden, Theology and Rus. At the commencement of proceedings, each player board will be festooned with wooden disks representing followers aligned to these factions, and your aim is to deploy them to various locations or individuals upon the map or within your ‘court’, which will be made up of advocates and gods which can be purchased from the market, or – rechristened here in a somewhat clumsy act of thematic binding – the ‘saga’.

You’ll be gifted four actions per turn with which to write your own saga, each of which can be selected from a menu of investment in cards, journeying between locations, playing cards to the board, activating those cards, and parleying (which must be accomplished to establish your influence in a region). Should you at any point have deployed the most followers of any one faction you’ll also gain access to a further powerful ‘Influence Action’, at least until someone snatches that lead away from you. And snatch they will, as the see-saw sway so redolent of the Pax series is in full effect here. 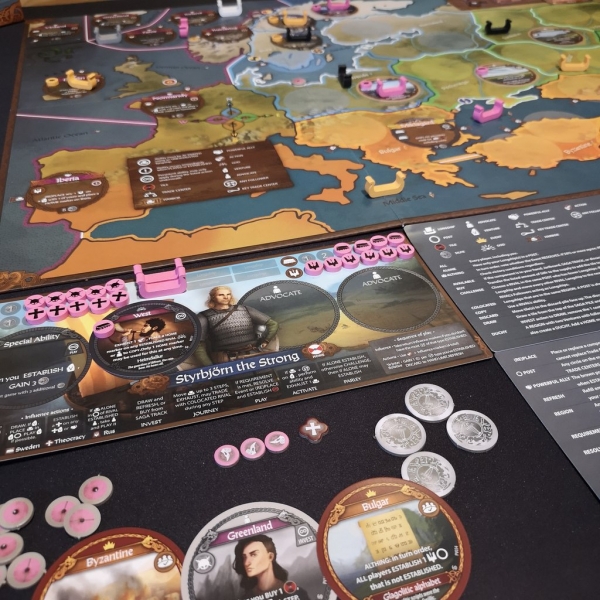 This tight, contested grasp on so many disparate goals lies at the heart of an always satisfying decision space. Each turn will present a unique puzzle as to how best leverage your position. You’ll want to build an economic engine to take advantage of the cards the saga spits out, but investment there will rob you of the silver required to ingratiate yourself with the mysterious eastern centres of capital, or lure to your banner the powerful mercenary fleets of your Scandinavian allies.

You’ll want to nestle your longships upon prized sites of conquest, protecting your influence and investment like a mother hen, but that will rob you of the agency to sail, harnessing the winds to strike out for evolving opportunities. You’ll want to build a court of powerful advocates and nail yourself to the tree of a chosen god, but each of these ambitions comes with a cost. In silver, in focus, in time. 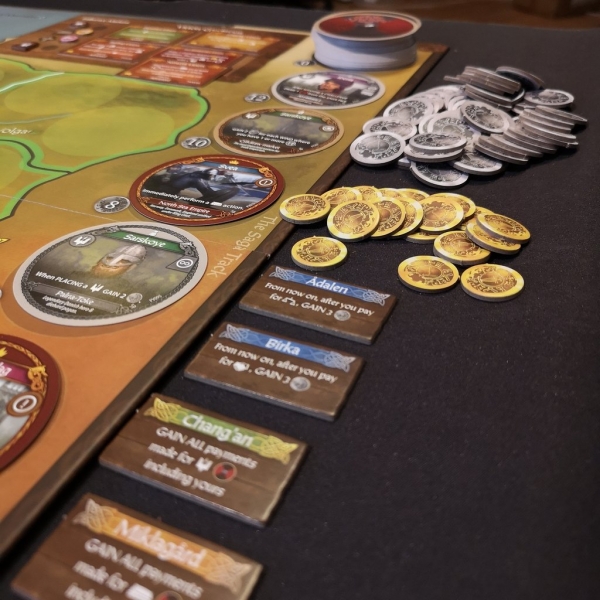 There are many routes to victory here, but with up to five other players to contend with, and four different paths they can each ride into the annals, your focus will invariably shift as you walk a delicate tightrope between enacting your ambitions whilst stymying those of your opponents.

Even at three players, there is precious little room to pursue your chosen agenda unfettered, as despite the apparent size of the map – the play space is deceptively tight, with forces anywhere on the board never more than a turn or two away from harrying your borders. They’ll come knocking with their filthy lucre, their heathen gods and their heinous allies to undo the fabric you have so carefully stitched.

Misdirection is your friend here. With each location, advocate and advisor proffering a unique action, it takes a seasoned mindset to keep track of the many variables at play. The tacticians amongst you will likely draw your opponent’s attention with a boisterous display upon the shores of one sea, only to creep furtively towards a tightly nestled triumph upon another.

Those who did not pay the one coin of four to man of new God, whipped was twenty and put in chains

Conflict, when it occurs is an abstracted affair. There are no dice with axes on them to be rolled, instead we’re presented with a more crows-eye view numbers game. When one chooses to Parley and establish themselves in a region they must merely have more longboats at that site than any of their rivals. We can extrapolate this to suggest the honeyed tongue of influence as much as the clash of steel, but it is no less satisfying for it.

Even bolstered by the presence of allied fleets, the focus and spread of your forces will never be enough to guarantee dominance in all areas- thus engendering a delicate dance of competing priorities that taxes and satisfies in a fashion that a more swingy system may obscure. If the absence of lady luck here sounds too deterministic for you then rest assured the appearance of event cards will still put the cat amongst the pigeons, adding an air of unpredictability that further spindles even the most carefully laid plans. 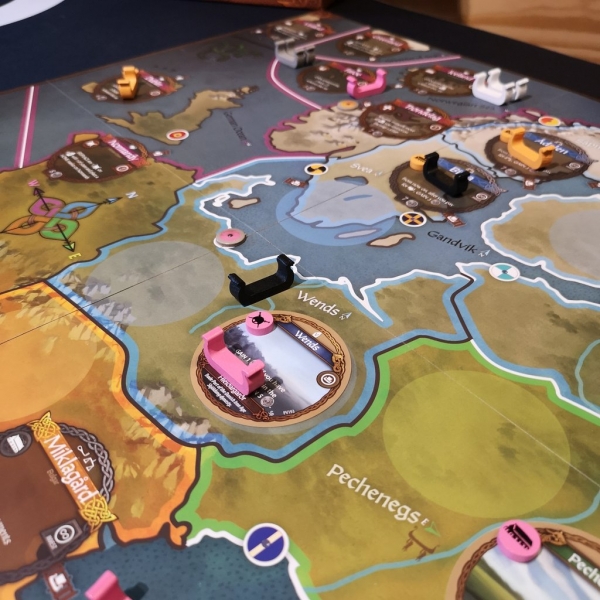 Victory conditions come in four sets of five, ranging from the relatively straightforward ‘First to x influence’ of the ‘Novice’ conditions all the way through to the more tangled conundrums of the nauseatingly obsequiously titled ‘Eklundian’ tier. This not only ensures plenty of reasons to return to these waters, it can also mean an entirely different flavour to the strategies employed. There is a definite traditional satisfaction in wrestling over the more easily parsed and hotly contested goals of the novice sets, just as there is a strange Machiavellian satisfaction in eking out a clandestine victory as you claim one of the more loosely woven endgames.  Playing time will be duly affected as well, although there is a built-in timer stipulated by the trickling river of Saga cards, conjuring a portentous Ragnarok-ian vibe as the deck thins.

Whilst I’ve glossed over many of the particulars and mechanics of the game here, rest assured they never rear their head as to obstruct the flow of proceedings. Designer Jon Manker has achieved a remarkable mix of clarity and variance here, where mechanisms both enable and obstruct in a graceful balance, in formation of a sturdy hull atop which has been draped some wonderfully rendered art, satisfyingly tactile components and a realm of possibilities as wide as the ocean itself.

In the end it is the shifting range of available actions and pragmatists response to fate that defines this experience, ensuring a game that is satisfying even in its shallows, yet one that offers inky depths for those brave enough to set sail upon their dragon ships in search of headier climes.

Jackwraith replied the topic: #324333 30 Jun 2021 13:12
Great stuff. I don't think there's anything that could shake Pamir from the top of the Pax tree for me at the moment, but this sounds like something I'd be willing to explore to see if it could.

Jackwraith wrote: Great stuff. I don't think there's anything that could shake Pamir from the top of the Pax tree for me at the moment, but this sounds like something I'd be willing to explore to see if it could.

It's not quite as elegant and refined as Pamir which is still the gold standard, but it's a different beast that offers a different experience. I'm glad to have both. This one has already lured some friends who are now more receptive to Pamir in its wake, too. Renaissance is next.

Haha how could I resist? 'Hammerheart' is actually an awesome album to soundtrack your scheming with this one.

Thanks for reading man. Much appreciated from a writer of your calibre!
Read More...