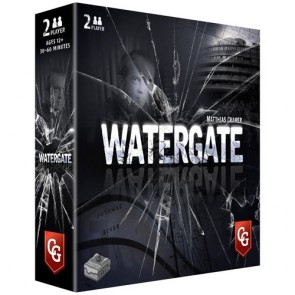 Much has been written about Nixon and the Watergate scandal. From historical texts to award winning films, the incident has been poured over from every conceivable angle. It even entered our vocabulary as we began to use the suffix “-gate” to refer to every scandal under the sun.

Back in 2019 the Watergate scandal finally made it’s leap to the tabletop. Designed by Matthias Cramer, published by Capstone Games, and with art from Kiemens Franz and Alfred Viktor Schulz. Watergate is a two player only game depicting the fight between the Nixon administration and journalists Bob Woodward and Carl Bernstein at the Washington Post. The Administration seeks to cover up the Watergate Hotel break-in whilst the journalists seek to expose it and bring down the presidency. Simple.

The game is a straightforward enough proposition. As the Nixon administration you want to suppress evidence, turn informants, and conspire to get away with it, or stall until your presidency is over. As the Washington Post you are looking to thread the evidence together, bring informants onto your side, and link them to the man himself. Nixon. Tricky Dicky.

This is manifested in the evidence board, which has the sort of look you might expect to find in a conspiracy theorist’s basement. It’s perfect. 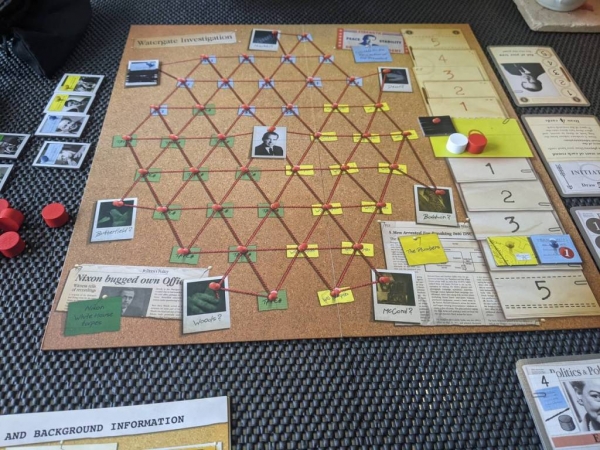 Two of those people around the edge of the board need to connect up to each other and Nixon for the journalists to win.

The game is powered by one of my favourite mechanisms, multi-use cards. Each side has a deck that is unique to them, with cards in each deck representing important people and events that were part of the real scandal. Each card can work one of 4 ways: move an initiative, momentum, or evidence token, or for it’s event.

The track at the side of the evidence board is where the real struggle of this game takes place. At the end of each round any tokens on your side of the board are yours. Get the initiative and you draw more cards and go first next round. Momentum pushes Nixon towards victory or the journalists towards some game changing powers.

The evidence is the main thing we are interested in of course. At the start of each round, evidence tokens on this track are face down, placed at position 0 by the Nixon administration. You push and pull these tokens back and forth, but the journalists have to guess what colours are available, hoping to get the information they need.

When you do eventually get an evidence token it goes on the board in a matching colour space. With the journalists it goes face up as you slowly thread the evidence together, connecting informants up and eventually to the president himself. As Nixon you put them face down, blocking those routes that the Washington Post will use to hang you. These chunky cardboard tiles feel great to slam down as one side builds a wall and the other tries to smash it down. One side pushes, the other blocks. A tug of war ensues. 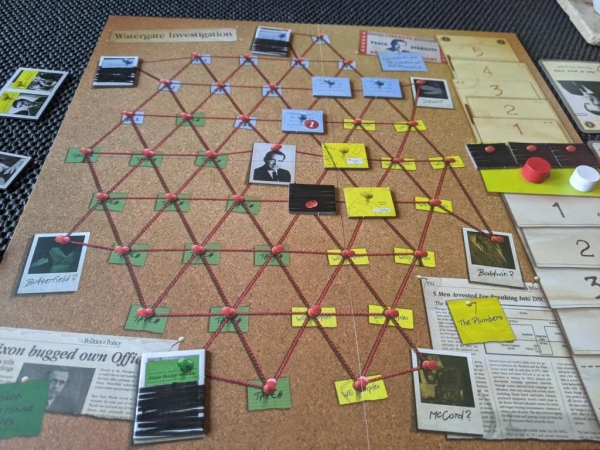 The journalists start to piece it together.

Every choice in Watergate matters. Each card you play carries weight and meaning. Importantly though those choices are limited and don’t feel overwhelming. This means you can spend time concentrating on how agonising they feel instead. Isn’t that fun?

I’ve played both side in the game and it is really interesting how the game looks from each perspective. As the administration you feel pursued and harassed by these pesky journalists who keep turning over evidence you thought long suppressed. As the journalists you feel like the administration is an impenetrable wall of silence that you will never find your way through. Even after a few games that feeling remains. The game lets you inhabit the role of your faction, feeling the pressure that both sides must have felt during the real Watergate Scandal, and ultimately deciding how it will play out this time around.

Watergate is a really impressive piece of design. Its rules are simple to teach but complex in execution. This is a tricky thing to pull off and I greatly admire any designer that manages it. All the complexity is on the cards, so you can hold the rules in your head whilst contemplating your next astounding play. There is a certain design school that says:

In my experience the deepest games I’ve played have had ‘just enough’ mechanics with the complexity and depth coming from the interplay between a simple set of ideas with complex implications. I love small box games that manage this trick and will always be charmed by a design that can embrace it’s limited trappings to become something more transcendent.

Watergate is one of the more expensive 2 player games out there, and certainly more expensive than other two player games I would recommend like Patchwork. Now we are done with my one criticism, we can move onto the summing up gushing praise. Every time I’ve played Watergate, it’s been a nail biting battle between truth and corruption. At every turn the Nixon administration blocks and obfuscates. The journalists must dig, reveal, and improvise to bring Nixon down. It’s a game of hard choices, bold plays, and those wonderful moments when you pause, look across the table and try and read what the other side is thinking. It’s truly superb.

I played Watergate via a Tabletop Simulator Mod and in real life with a friend’s copy. I do not own the game.

July 03, 2021
Rating
5.0
Watergate
I love a battle of wits, a great two player game where you lock horns with an opponent. Watergate from Capstone games may be the best I've ever played.
T
thegiantbrain Top 50 Reviewer 36 reviews

Shellhead replied the topic: #324498 07 Jul 2021 14:17
I don't normally go for two-player games, but the theme and the visual design already have my attention, and I appreciate any design with more depth and less rules.