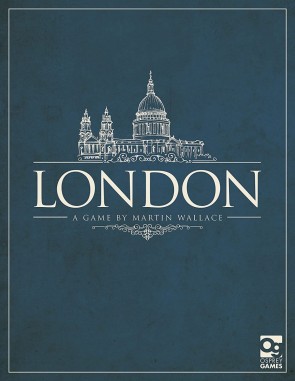 After the Great London fire of 1666, the top minds of London have turned to you for help.

It's a rite of passage to play with dominoes.

Spending minutes meticulously setting up each domino an inch apart. Tapping one end and watching in anticipation and excitement as one hits the other, hits the other, until they're all knocked down. Then, starting all over again.

Now, instead of dominoes imagine you're building 17th century architecture.

You do this by spending turns placing cards from your hand into a row of buildings in front of you. This sometimes costs money, but always costs you a card of a matching colour. Which is discarded to the market. Available for anyone to pick up on their next turn.

When you're satisfied with your building row, you can spend a turn to run it. Allowing you to activate all of the buildings you've put down. In any order. Paying their activation costs. For the majority of cards this is also when you say goodbye. As once activated they are flipped over, and will be deactivated for the rest of the game.

However, a running, thriving city brings people looking for work. Unless these new arrivals are provided for, poverty will seep in.

This is represented through poverty tokens gained after each run. These are gained for every card in your building row, cards left in your hand, and any loans you've taken out. You won't lose any points for poverty until the end of the game, but it looms heavily over you throughout.

Thankfully, poverty abides zombie rules. Wherein I don't have to be the fastest runner to survive, I just need to be faster than you. As at the end of the game, whoever has the least amount of poverty, removes all of theirs. Everyone else then reduces their poverty by the same amount.

You continue this cycle of building, running, destroying, gaining poverty and rebuilding until there are no more cards left to draw. Then everyone tallies up their prestige, takes away points for their poverty, and whoever has the most remaining prestige wins. 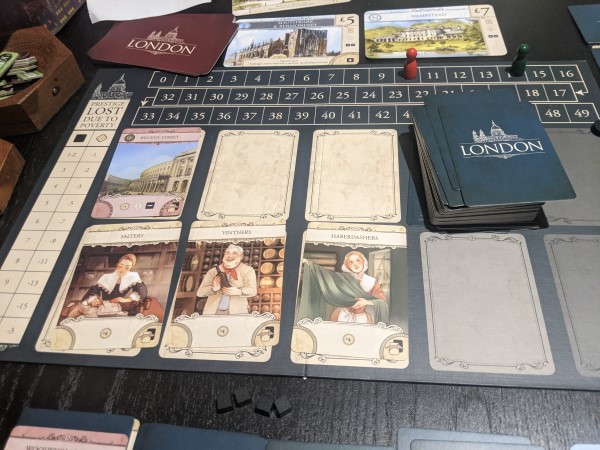 London Second Edition took me a while to warm up to, it follows a similar pattern of play to other engine builders. Adding cards to an engine, and using cards to pay for cards is straight out of games from the Race for the Galaxy series.

However, London is not an engine builder.

Every time you run your city it sputters to life in a flash of brilliance before spontaneously combusting, forcing you to build it again. This is a far cry from what I enjoy in engine builders. Where you start weak and over the course of the game grow to become a world beater. There is no growth in London beyond what's currently in front of you. In fact every time you feel comfortable, and build a great combination of cards, the game takes off its white velvet glove and slaps you across the face.

Challenging you to do it again.

Once you get into the groove of knowing the impermanence of everything you do, you begin to enjoy it. Maybe that's Stockholm syndrome at work, but maybe it's the other mechanics at play.

Figuring out what to keep and what to get rid of is always a difficult yet interesting decisions to make, and shines again in London. The way poverty creeps into your city, and the decisions you have to make around playing an extra city card, or running when you still have a healthy hand of cards is again interesting and difficult to make.

To make things more compelling is the Buying Land action. Which allows you to buy plots of land all around England, and to gain a semi-permanent power. Allowing you to strategise your next bout of city building. And the development cards which get more powerful throughout the game. Where instead of gaining 4 pounds per money card you're now getting 7 pounds. 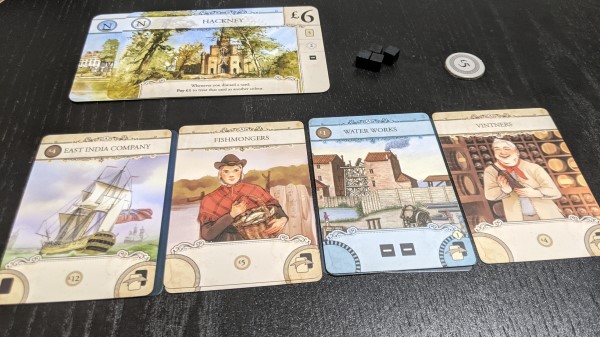 Please, sir, I want some more

A fantastic line from the rulebook:

Money will affect your ability to do things, but is not the goal itself.

It has larger implications on life. But also sums up the struggles you'll face in London.

You have no steady income, and cannot generate steady income, the money you get fluctuates on card draw and there's no guarantee you'll get more. The question then becomes, with this limited supply - what are you going to do? Put it towards solving poverty? Reinvesting into more money? Buying a new plot of land or new development? Or paying off an existing loan? You'll be guessing, and second guessing, your answer throughout.

While money may be in short supply, you're always able to take a loan. Of course this may come back to bite you during end game scoring, as it's very costly in prestige. But similarly to poverty this only becomes an issue if other people aren't also taking loans.

So to sum up the game so far:

You have no money.

Don't want to take a loan.

And everything is becoming more expensive.

Are you feeling under pressure yet?

One of the most brilliant outputs of London's design is how it puts you in the pressure cooker with so few resources. Usually, in resource management games you'll have multiple resources to consider, but in London there's only two: money and cards. Meaning everything you do with these resources counts, as you won't get a second chance to spend it. 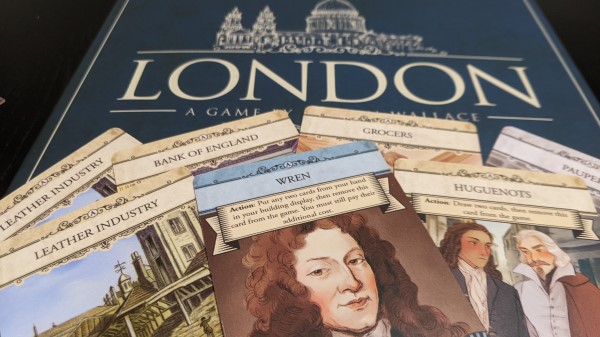 Thematically, London nails it making you feel like a right old snob while playing. The artwork is both gorgeous, and time appropriate. The gameplay is grounded, and the cards abilities make sense in the world, like statues which provide no value other than prestige, or Street Lights which cost money to run but reduce poverty because people work longer hours. Osprey Game's production of the game feeds into this feeling as well with the luxuriously thick, smooth cards, simple minimalist box art and the linen finished board.

London already has a fantastic reputation. So for a lot of people I'm not saying anything new, but for those who haven't played it, London is a great card game that's stood the test of time. While my personal preference wants the game to be shorter, and wishes more excitement from the game. It's still one of the best card games I've played, and would gladly play it when asked.

So, if you're after a game that feels intimate, where you need to work hard under constant pressure to perform. Then I recommend pouring yourself a glass of brandy and donning an attire of monocles, top hats, and white cotton gloves, because London is the game for you. 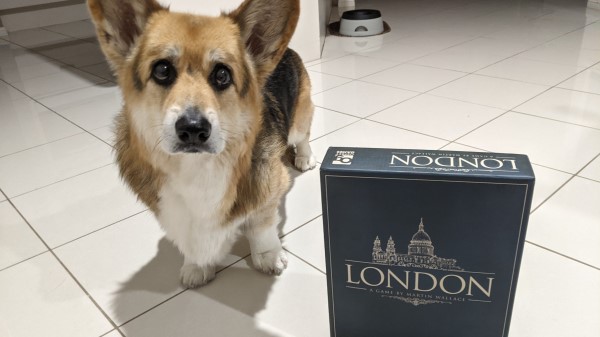 Thanks for reading. Visit Roll to Review, where I'm ranking all games I review. Check where this one sits.

DukeofChutney replied the topic: #326715 22 Sep 2021 19:11
Nice review. Of the games i currently own i've played this one most. Probably 12 times. I've got my strategy down pretty tight by this stage and it no longer feels like a harsh game to me. I no the rhythm of the decks so running out of money or getting loaded with poverty does not really happen anymore. I still enjoy it but it is more of a tactical game, at least with two players. With three or four you may not draw some of those big point multipliers like the underground in the late game so i have to adjust a little.

I find a lot of my friends like this one, and it is easy to explain to people who don't play games often. It fulfils Wallace's design goal of not needing to open the rule book once playing.

damiendada replied the topic: #326971 04 Oct 2021 16:25
London is exceedingly simple! The rules are quickly learned and we are ready to play. But the complexity comes from its depth and the choices available to the player.