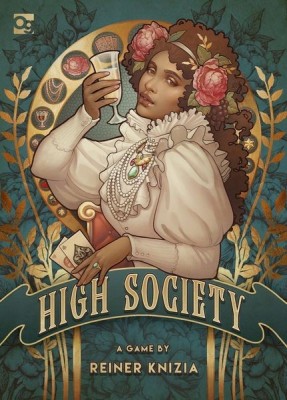 A quick and simple auction game, with a couple of twists.

You begin the game with a wad of 11 cards worth 106 thousand dollars. The first question you'll ask is how do I get more money?

That's the neat part. You don't.

You are a socialite with no money management skills and poor impulse control. Financially, it's all down hill from here. While the smart thing would to invest it all in Dogecoin (please do not ask me for financial advice). You're not smart. Instead, you need to spend it, and spend it in the most frivolous way possible.

Like buying an auctioneer, and then getting them to run all your purchasing decisions through an auction. Dressage lessons. Put it up for auction. A bottle of champagne. Auction. Victory points. You guessed it, another auction.

These auctions are conducted in a fashion of you're in, until you're out. Where you need to raise the bid of the previous player, or pass. And once you've passed, you can't come back into the auction later.

Out of all the forms of auctioning in board games, this method is my favourite. As it's quick, but allows for the drama of stakes quickly ramping up to the inevitable tete-a-tete between the two people whose only care is to win the auction, regardless of the money they're losing. 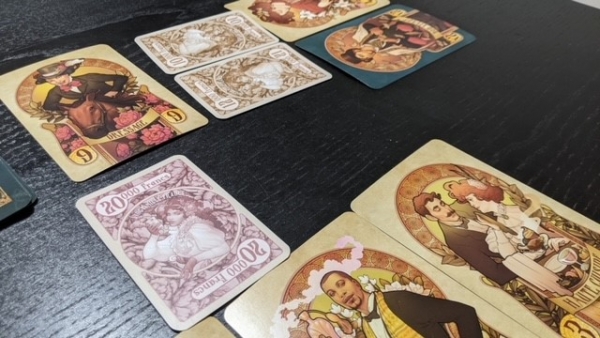 Money is the root of all victory points

High Society has an interesting relationship with money, where even though you start with 90 thousand. The cards you're given to represent this aren't broken up evenly, for instance one card is worth 1 thousand, another is worth 25, and the rest are somewhere in between.

You are forced to think about and strategise your spending. As cards you've spent are discarded, and cards you've placed in this auction can't be changed.

For instance, keeping your smaller 1 and 2 thousand dollar cards until later in the game can put other players in some tough positions. Like if someone's played a card worth 8 thousand, and then you play 9 thousand (8+1). They will most likely want to one up you to 10 thousand (8+2) but if they don't have a 2 they'll have to go higher, like 12 (8+4) or worse 14 (8+6).

Which they definitely don't want to do.

We don't rub shoulders with the common folk. Yuck!

While this is disgusting behaviour, it makes for a great mechanic. And a constant fear you're spending too much. You're going to be spending a lot of time theorising who has the most, and the least amount of money. Crossing your fingers it's not you.

This creates opportunities for taking calculated risks and getting rewarded, or punished. As the last thing you need to know about High Society is you're never sure when it's going to end.

There are four special cards shuffled into the 16 card deck, when the fourth card is drawn. The game ends.

A bad shuffle will make them the first 4 cards drawn - and hilariously ruin the game. But a good shuffle will spread them out, creating suspense as you see them being drawn one after the other, but never knowing when the last one will show.

Think of the impact this has on the value of victory points. In a game where all 10 of the victory point cards are drawn, a 3 isn't worth much. In a game where the 5 card is the highest drawn card, a 3 is worth a heck of a lot more. Given you have no idea when a game is going to end, you're going to have to speculate. Do you take early auctions in the hope of a short game? Or, stave off until later when everyone has no money to compete? 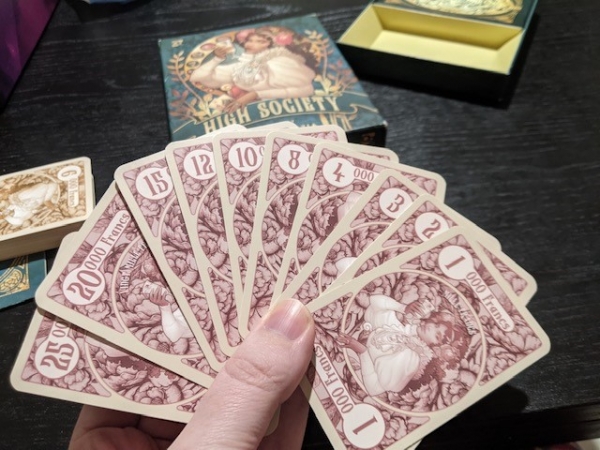 Not all of these special cards are good. While some are very good and double your points. Others are the opposite, halving your points, or removing cards you've already won in auctions.

These cards are also auctioned off, but in reverse fashion.

The first person to pass the auction "wins" the card, but they also get to keep all the money they put into the auction. Whereas everyone else is, hopefully, significantly poorer for the experience.

This creates another great, tough decision for you. Where you must ask yourself: how much is not getting something worth to you? And: If I get this, how far back does it place me? And can I make a come back?

It also creates variety in the gameplay, and it can genuinely surprise you as you draw it from the deck.

High Society is a brilliant game. Easily my favourite small box game, and my favourite auction game. It's simple to setup, teach, and play. And for a 20-25minute game you will burn your brain thinking about whether you should keep bidding, how you're going to keep bidding, or pass. While at the same time, thinking about where you're going to spend your money, and where you're going to risk it all. But best of all, it's cheap enough that those of us who aren't in High Society can still pick it up and play. 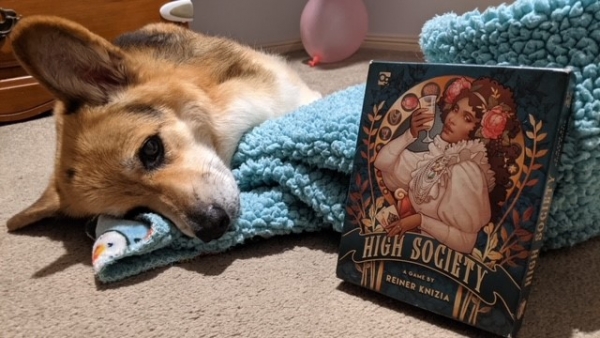 July 09, 2021
Rating
5.0
High Society
Absolute blast to play. The will I won't I decisions of the auctions never stop stopping! Worth a permanent spot in your board game bag.
D
DavidNorris Top 50 Reviewer 10 reviews