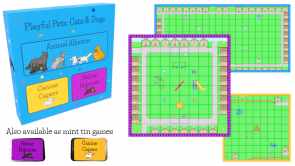 Game prototypes are among the most beautifully ugly things you’ll see. Inside the mint tin of Feline Felonies are some cat playing pieces, rough-hewn from resin and six board pieces, cut by hand and sellotaped with magnets to stay together. The love and care that’s gone into assembling this little tin are palpable. There’s also an array of cat toy counters and some dangerously tiny dice.

The cute factor of the cats and those miniature dice is enough to get my daughters to play. It’s a simple game of item collection with a bit of pushing and shoving built-in. On your turn, you roll the dice to determine how many actions you get. They can be spent on moving, picking up toys from the board, or trying to steal toys off other cats before they can get them home safe.

At first, there’s one toy on the board per cat. So we all rush into the middle to pick them up. The four “dog” spaces on the board are a free move as the cat flees past in fear, and on the way back to her home space, my youngest realises this is more efficient. It’s a nice moment for her and me, seeing her work it out for herself.

There are also four “cat” spaces which, if moved through with a toy, flip the counter to be worth double its points value as your feline peers seethe with jealousy. So we all make detours to ensure we visit these spaces before dropping our toys off at our home squares. So far, so identical.

When you roll for your actions, you also get a special ability depending on the result. You might get to store actions for a future turn or double the points on a toy. If you roll a one then your neighbouring player gets to spend it for you. But two of the rolls let you add a new toy to the board, and its position is rolled randomly. You can also add a toy by visiting a corner square.

With the board now empty, the drive is on to add toys and the random drops cause the game to heat up considerably. The kids work out right away that toys dropping closer to their current, or their home locations are a shoo-in to capture and get away before anyone else can interfere. Every placement roll is followed like a raptor, with accompanying cheers and groans.

At the same time, the random placement means we can no longer be content just to thieve our allotted toys. We’ve got to barge in where we can and get them off the opposition. If you’re in an adjacent square, you can try to take a toy being carried by a neighbouring cat. It’s a straight dice-off to see who wins with a couple of neat wrinkles. If you win, you get the counter and you get to flip it. If you tie, the owner keeps it and gets to flip it. So it’s not without risk.

Again, after a few fraught attempts at felonies, the kids work out for themselves that this is where stored actions are best spent. Rolling a six means you can get three bonus actions to spend later, meaning you’ve got more chances to steal a toy and, crucially, get away before your opponent can try to get it back. 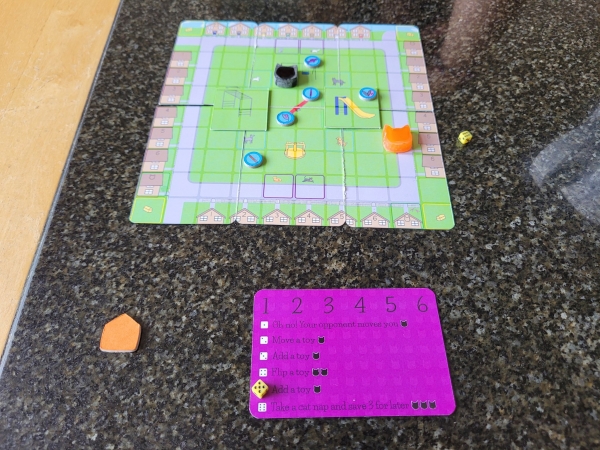 Play degenerates into a frantic tug-of-war as we scramble for toys and thieve them back and forth from each other. And at this point, I can’t work out whether or not the stealing and the banked actions are a brilliant or a terrible idea. There’s a lot of dicing-off: not only in the attempted captures but also in the action point rolls, as a successful steal is no use if you don’t have the actions to run away, and your opponent does. Much of the simple movement tactics in the game are lost beneath the rumble of tiny dice but, at the same time, everyone is hugely invested in every roll.

Despite myself, I get fully engaged with the roulette-style excitement of seeing who’s going to get away with which toy. It’s clear that there’s a limit to how many times I can just ride the thrills before it becomes routine. But that’s not how kids work. My youngest is hanging on to every roll by her fingernails. Her teenage sister has less patience, but you can see she’s drawn in despite herself.

The last toy on the board is catnip, and it’s worth a bonus point. By this point, I’m already out of the running, entirely by dint of bad luck rather than fatherly concern. But for the kids, the race to get the catnip is going to decide the game. To my teen’s horror, it appears on literally the closest square to her sister’s home base. But then she rolls a six so she’s in with an outside chance to steal it before it can be gotten home, dry. An outside chance that doesn’t come off, but it’s an exciting end.

Exciting enough that they’re happy to play it again by themselves while I go and do tiresome adult things. With two they discover the competition isn’t so intense: there’s more space on the board and no opportunity to chase a leader. They also discover that if you are leading there’s a curious duality to adding toys to the board. It’s not always something you want to do, which can stagnate the game and forces the chasing player to waste actions putting them on the board.

Still, as I pick up the scattered cat toys and pack them back into their mint tin, Feline Felonies lives in a happy valley between typical games designed for children. In one corner there are tiresomely worthy games of education. In another, tiresomely boring mass-market games of gotcha. In the third, tiresomely challenging euro-lite fare that a certain kind of po-faced hobbyist likes to inflict on their offspring. Balancing all three legs is Feline Felonies, a game that knows what kids like, how they learn and offers it to them in a package of winsome cuteness.

Feline Felonies will be on Kickstarter shortly as part of the Playful Pets package, alongside Canine Capers.

July 12, 2021
Rating
3.0
Feline Felonies
While strictly a game for children, Feline Felonies does a fine job of balancing a little bit of strategy and a lot of luck into an exciting package for little players.
MT
Matt Thrower #1 Reviewer 286 reviews