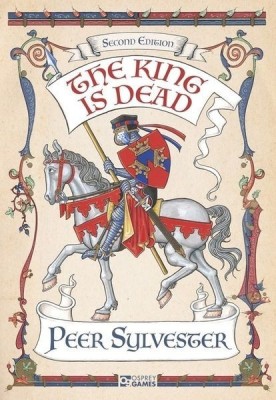 Three warring armies, eight actions. Use them, and I'm yours.

The King is dead

This is your chance.

You are a noble, if in name only, trying to rise to power in a war torn United Kingdom. The three warring parties; the English, Welsh, and Scots are fighting to gain control over 8 regions. Meanwhile, you're doing your best Aaron Burr impersonation trying to gain favour with the winning side.

Which begs the question: which side is winning?

At the start of the game, each region will hold four randomly drawn cubes representing armies. On your turn you get the choice of either playing a card and manipulating these armies. Or passing.

Once you and everyone has passed in a row; they fight.

The location of this fight is predetermined, and visible to all.

The power, or colour, with the most cubes wins and controls the area. After all 8 fights have taken place, the power with the most controlled areas becomes the next ruling party.

Which then begs the question: how to you gain favour with them? 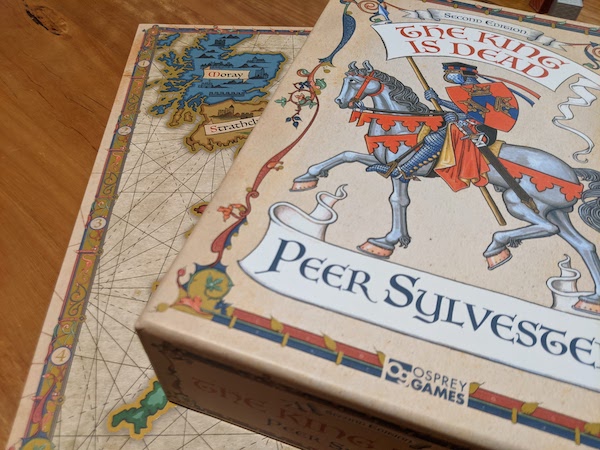 This is where it gets interesting

You, and every other player, start the game with the same 8 cards. Each representing one action you can take. Some of these actions are adding specific cubes to the board, others are moving cubes already on the board around. At no point do you ever replenish your hand. So once played, you can only interact with a card by staring at it longingly in your discard pile.

For the second part of your turn, after you've carried out an action, you must pick up one cube from anywhere around the board. This is how you gain favour with different factions.

Let's take a second to digest.

You're spending turns manipulating the board in order to strengthen one power. While at the same time, making them weaker by taking their armies to gain the favour. It's a contradiction between what you want to do, and what you need to do.

But it also gives you options.

Then there's the 8 actions.

Unlike other games, you don't have much control in The King is Dead. Instead, it's a game about reading the flow of battle. Rather than supporting one power and brute forcing your way to victory, you'll be spending more time watching what's happening on the board, than manipulating the pieces in place.

Where I'd hate this kind of downtime in other games, in The King of Dead it still feels electrifying.

It's a relatively quick game - 45 minutes - but with the limited actions you can carry out. You need to be absolutely sure which action you want to take. And more importantly when. You'll spend a lot of time thinking about what to do, only to pass. As with each battle won, the board shrinks. Reducing the options of your actions, but making them more powerful in terms of determining the winning faction.

Another consideration is that with each battle, the outcome of the war becomes clearer. Meaning, if you use all of your cards early to put yourself in a great position. You leave the board open for another player to swoop in and either swing the battle in towards their supported faction, or more likely, they use their cards gain the most favour with the obvious winner. 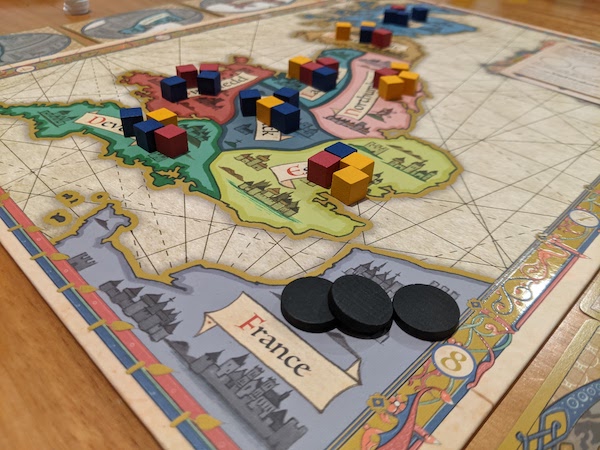 There's not a lot of rules in The King is Dead.

But there are a lot of tie breakers.

As you can imagine with only 8 actions, and the ability to only gain 8 influence. The game is always tense, and always very close. What makes the game closer is the multiple paths to end game. While we've covered the warring factions. If there's a battle, and there's a tie i.e. the same number of cubes from each faction. Then the sneaky French attack.

If they attack three times, the game ends immediately.

And the way victory is determined is by whomever has the most sets of the three powers. They become The Great Uniter, fighting against a common foe.

This is the most difficult part of The King is Dead to wrap your brain around. The two ending conditions, plus the two or three tiebreakers behind each condition, makes five or six different ways to crown a new king.

Making matters worse, is these change depending on player count.

You'll learn these combinations after a couple of games, but still for a relatively simple game. Figuring out the winner can be quite complex. And frustrating, when it goes down to the third tie breaker, and it's a rule you've never read before. 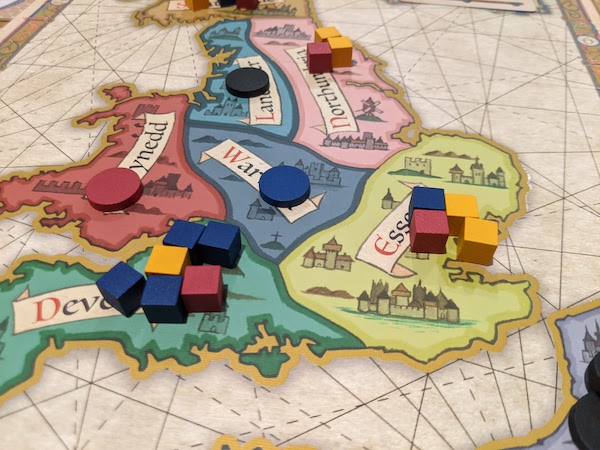 The King is Dead is a love child between Santorini, and Hanamikoji. Two games I adore for their simple rulesets, and their tense push and pull gameplay which makes gravity feel like it has increased ten fold. The King is Dead is a deeper game than both of those two, while still maintaining a paper thin ruleset.

It's also a game that plays fantastically at each player count, as the rules mutate to fit. At four players it becomes a team game where you're trying to help your team members win - without communicating with them. This adds a new layer of thought, where you're not just thinking about yourself, and your enemies, but also trying to figure out the best way to help your ally.

There's also special cards! Which completely turn the game on it's head.

No Pun Included gave The King is Dead their award for best game of 2020, and I can see why. I am blown away by its simplicity, and mental complexity. It truly is a fantastic game, and a phenomenal design. I have loved every game of The King is Dead, and it's one I want to play more of as we go into 2021. 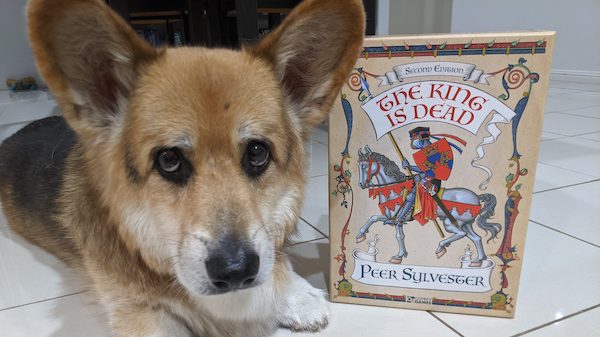 July 27, 2021
Rating
5.0
The King is Dead (Second Edition)
Simple fantastic! It's short rules, and play time allow you to get going really quickly. But there's no shortage in strategic depth. Get ready to scratch your head in this area control game.
D
DavidNorris Top 50 Reviewer 10 reviews

mc replied the topic: #326860 30 Sep 2021 01:48
Love this one. It is mindbendingly good. Every decision feels like it matters. Even passing. And sometimes the decision does matter, and often it doesn't, or is unclear - but it FEELS like it does so that's the main thing. I really wish Osprey had gone for a different setting - the original was Siam - but, eh, it's fine.

Still haven't come across anyone who has used the special cards either.

jpat replied the topic: #326866 30 Sep 2021 09:12
Serious wow. I hadn't noticed that this was a reimplementation of King of Siam, even though I thought of KoS when I was playing it. Irrespective of setting, this is a very solid area controller that even works well at 2, which is not all that common. (Sumeria with the two-player "expansion" comes to mind, and maybe the COIN games.)

thegiantbrain replied the topic: #326957 04 Oct 2021 10:53
I've only played this once but I am now looking for an excuse to add it to my collection. Such a tight piece of design. I love small box games done well.