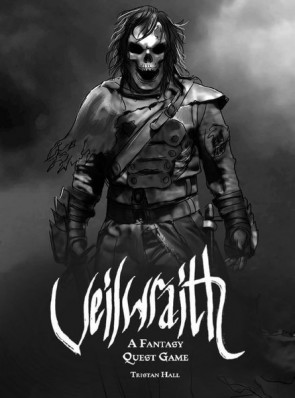 Tristan Hall’s Veilwraith sets itself up for success with me right out of the box. It’s got that striking greyscale only Black Metal art style that I love and it has a slightly pretentious dark fantasy setting about memories, souls, fate, and corruption. I’m here for that too. It’s also a solo game with easy setup, straightforward rules, a brisk playtime, and some cool, fairly original mechanisms. Right in my current board gaming wheelhouse. So the first time I sessioned it I was shocked at how much I didn’t like it. It felt way too easy, I blew through the first couple of Vignettes (lesser games might call them “scenarios” and was like welp, that’s all there is to it then. I was ready to actually use the dreaded “B” word to describe its mechanical failure.

I went back and re-read the rules and realized I had done something totally wrong. I was amassing huge amounts of power rather than spending it. So I went back and tried it again correctly and it was like “aha, so there’s the game.” Unlike far too many content creators that get rules wrong in a rush to cover it and move on to the next release, my due diligence was rewarded with a compelling game that I’ve found myself returning to often in the time that I’ve had it, enjoying the light campaign elements that add just enough persistence and continuity to keep me interested in pursuing the next Vignette.

The goal of each Vignette is to collect five Keys, which as a Veilwraith you have a vested interested in because these are functionally Memories with which you can restore light, life (and color) to this kind of spiritual post-apocalypse. Of course there is opposition – the Deja and the Anima are your foes, and you’ve got to Fight, Influence, and Explore your way through them with the help of your Memories to find these keys and unlock a Portal that will allow you to escape the Vignette. Tarry too long and the Archfiend appears and the game ends. If you are campaigning, this means you lose one of five Silver Ribbons and are thus one step closer to having your connection to the world broken. 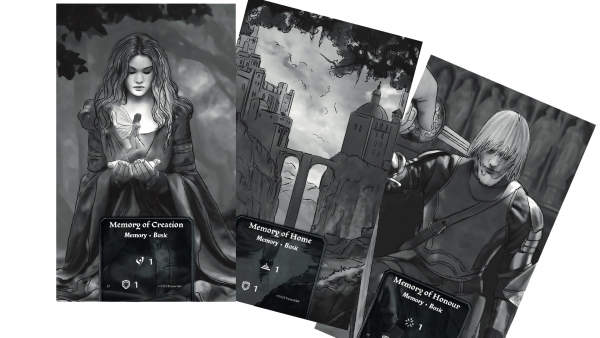 Heady stuff! And with the black and white art, it feels heavy and doomy in the best possible ways. But the gameplay is quite light, with a simple and direct draw-a-Threat-card-and-fight-it process driven by a brilliant power cycling concept. You have three basic actions (Fight, Influence, and Explore) in a 1/2/3 slot. Using an action gives you that many points to spend against a Spirit cost on the Eremite or whatever it is you are up against. You can also use Memory cards from your hand to bump up that number and if you beat it, the Threat is defeated. However, if you for example spend a Fight 3, that action cycles down to the 1 slot and is thus weakened until it gets pushed back up along the queue. You can also spend a pair of Memory cards or tap (ahem, tilt) a card to bank a +1 Power token on an action which is where I went horribly wrong in neglecting to spend these markers.

Anything you don’t defeat deals damage to you or incurs a negative effect, and naturally over the course of the game the Threats will mount against you and the damage you take could grow exponentially if you don’t handle the Goblins, Pariahs, and other fell beings that belabor your quest. Assessing threat priority is essential and managing action values and card expenditures makes for some interesting and often difficult decisions.

The Keys turn up in the Threat deck, and you’ve got to spend Spirit values to claim them. Once in hand, they have special abilities and also a one-shot effect. I love this, having to make a decision to use a very powerful but only once per Vignette effect because you either wind up in a do or die situation wishing you hadn’t wasted it or reflecting that the choice could have been what won the game. That’s a great kind offrisson in my book. Get all five of the keys and it’s just a matter of opening up the Portal and moving to the next Vignette, which will have a different assortment of Threat cards, special parameters, and rewards.

The campaign element is chiefly in the form of a very light kind of deckbuilding. Over the course of a campaign, you can upgrade Memory cards from your base deck to increase their efficacy or to introduce new functions. There are a couple of tiers of upgrades, and it’s fun to level up and make permanent choices that will impact your deck composition. Nothing too radical changes so the flow and feel of the game remains the same throughout.

Which is also what I think is the downside of this otherwise excellent game. Even though there are intriguing choices to be made throughout and the atmosphere remains thick and luxurious, there is a sense that creeps in along the edges that the game can feel repetitive, mechanical, and almost strangely routine. Indeed, after blasting through three Vignettes in one sitting I felt almost like a machine playing the game. Readers who play a lot of solo gamers might know that feeling, where you are really familiar with the game and what to expect so you just kind of slip into this zone where you are flipping cards and moving tokens and it almost feels like you aren’t really that engaged with the game. The Vignettes do shake this up, and the absolutely essential Absolution expansion helps by substantially increasing the variety but the game does seem to lack dynamism along the development curve. 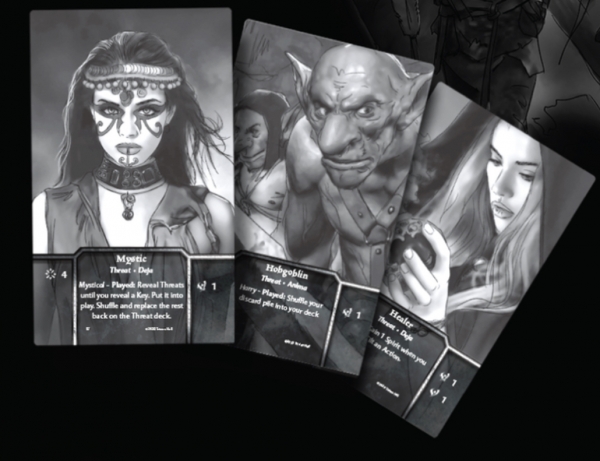 But with that said, it’s important to recall the scope of this design. It’s not Mage Knight or even Marvel Champions for that matter, FFS. It’s closer to something like Onirim, really, and the complexity and complication that more dynamic Vignettes or Memory upgrades would create might do more harm than good. Again, I do think the Absolution expansion is a must-have as it extends the campaign game and introduces a ton of new and frankly more interesting Threats to encounter. Getting up into the higher levels, the game can be quite tough to beat.

There’s also another expansion that bears mentioning- Veiled Wraith. I’ve never seen a publisher do something like this before, but this option replaces a number of cards in the game with more modestly clothed characters. Which is kind of odd to me, because I didn’t find anything in the artwork that was particularly scandalous or even potentially offensive – especially considering some of the other grossly sexist illustrations that are out there on other games. The images in Veilwraith are generally speaking elegant and classy rather than trashy and vulgar with plenty of equal representation among genders and skin tones.  But if finely muscled men and a glimpse of cleavage aren’t to your taste, there’s a way to adjust the game’s art to tone it all down. This is a nice option for those who want a PG rated game rather than a PG-13 one.

Plunging necklines and rippling pecs or not, Veilwraith is a modest design that doesn’t kitchen sink you to death with expansions, plastic junk, and empty content while offering an interesting, unique setting for a solo player to enjoy. It looks great and brings some new ideas to the table while telling its story. Overall, a lovely outing from Hall or Nothing.

hotseatgames replied the topic: #325070 30 Jul 2021 13:57
It's very cool that the designer has been making a go of it for a while. I first encountered them when working on my very first attempt at game design, the mod I did for Descent called Descent Quest. I think they made their own mod for it as well.

Frohike replied the topic: #325074 30 Jul 2021 23:20
Yep his BGG username is Ninjadorg and I took notice when he made a pretty appealing solo mode for Descent 1st ed. I backed Shadows of Kilforth on that name recognition alone and still really enjoy the game (& the sequel). It had passion project written all over it and I'm glad he found this talented artist (Ania Kryczkowska) to enhance his work.

cdennett replied the topic: #325249 05 Aug 2021 17:36
Traded for this game and had it set up on my table mid-game with one of the more scantily clad female threats face up. She made a comment of where's my scantily clad men? I pick of the threat deck and go a few cards to find the oiled up warrior wearing a loin cloth to show here, to which she says "OK, I'm fine with it now."