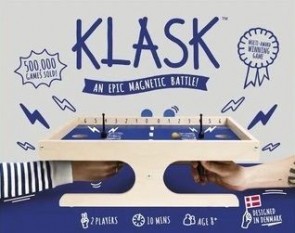 Due to the Danish flag on the rattling box, it’s easy to presume Klask comes as some sort of self-assembly mini-table. So it’s quite a surprise when the entire thing slithers out whole like some weird wooden birthing. But really it’s just an immediate introduction into what makes Klask special: its astonishing ease of play.

In truth, there is a bit of assembly required. Inside a plain linen bag, there are two magnetic sticks and two weird cone-like assemblages that stick above them. You put a sticker on the top and bottom of each and you’re ready to go. The sticks go beneath Klask’s table and move around the cones, which sit on top, and the stickers stop the pieces scratching the wood.

It takes seconds to explain to my youngest daughter, who’s at a loose end and needs entertainment. Any other board game would take at least a few minutes of unpacking, sorting, shuffling, even if we’d played it before. Each a tiny but real barrier to entry, a chain-link fence diverting prospective players away from a sociable tabletop game and toward lower-effort entertainment like TV.

At each end of the Klask table is a wide well that acts as your goal. The aim is to use your cone to knock a tiny plastic ball around, trying to get it into the opposition’s goal while defending yours. In the middle there are three magnetic white discs that will stick to a cone if it gets too close: accumulate two and your opponent scores a point. Finally, if you manage to get your own cone into your own goal, they also score a point. First to six wins.

Right from flick-off, it feels a lot like air hockey. Sure, it doesn’t have that effortless sense of swooshing around and it’s not quite as fast but then again it doesn’t cost a couple of quid for every single game. But in other ways, it’s very similar. You have a single tool with which you have to switch from attack to defence in a blink of an eye, depending on how physics feels like treating you today.

One of the things that makes it different is those magnetic discs. They’re very sensitive, and watching them fly toward your cone from an inch away is unnerving. We learn to be very afraid of these discs. Lightning-fast reactions can save you, but the disc is then on your side of the board and thus much easier for you to pick up again. Worse, a lightning swerve away from an incoming disc leaves you vulnerable to a shot, or to plonking your cone into your goal. 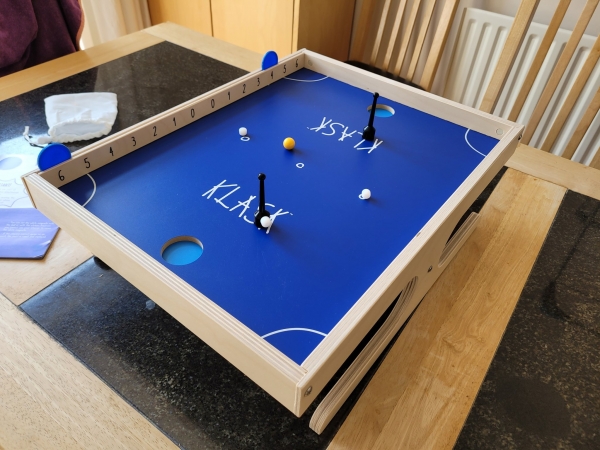 This is actually what gives the game its name. Klask is supposedly the sound made when the cone clunks into that wooden depression. Perhaps it sounds like Klask in Danish, but in English, we decide to stick with clunk and a sickening sound it is too, meaning you’ve given away a cheap, needless point. We soon learn to be as afraid of that sound as we are of the sight of magnets.

Half a dozen games later, often interrupted by us jumping up in terror to locate a flying ball or magnet before the dog eats it, we look up and wonder where the last half hour has gone. Klask has revealed some surprising twists, too. While I’d hesitate to call the game “strategic” there’s more to it than there is to air hockey, thanks to those flying magnets and the dreaded sound of Klask. We’ve improved, too, even over that short period. Far fewer Klasks, far more legitimately skilful goals.

When my teenager surfaces at around midday, there’s an immediate clamour to join in. Winner stays on is the perfect option with a game so short and so spectator-friendly. As we knock the ball around, we’re talking about how it’d be great for visiting friends and planning potential tournaments. Then, all of a sudden, we’re done for the day. Klask is very intense while you’re playing but when you do step back, a certain sense of sameness slips in.

Some days later, when I take Klask on a rare night out to see some old friends, that sense of sameness slips away just as fast. In a group with various levels of commitment to more strategic fare, it cuts across taste boundaries and into the evening. Flowing beer, if anything, makes it better although it means we have more close calls with lost pieces. Fortunately, the game comes ready supplied with spares.

The next morning, my wife asks whether the large Klask box is now a permanent fixture in the dining room. I evade the question. Because putting it away, even inside a cupboard or on a high shelf, would be putting up another one of those tiny, intangible barriers between us and it. Klask might be simplistic, it might lack much in the way of strategy but when you want a game it’s right there when you need it. That’s its purpose, an immediate injection of tabletop fun for two, on tap, and in that regard, Klask never ever fails to deliver.

jason10mm replied the topic: #325121 02 Aug 2021 10:14
Ordered! Looks like fun and hopefully it will absorb my kids like it did yours. They are definitely more into games that act more like toys. Shut the box was a big hit as well.

I used the amazon ad I see at the bottom of your article, hopefully this gives a little affiliate kick-back to the site. Or maybe Alexa is just reading over my shoulder

sornars replied the topic: #325123 02 Aug 2021 10:22
Solid review Matt! Klask is a ton of fun and is so easy to pick up; however, when I tried to teach a pair of youngish kids, getting them to understand that two magnets getting stuck to your cone was a point loss turned out to be difficult. Getting the ball in the hole was much easier for them to understand. It probably didn't help that I was teaching the game in broken Spanish but in a testament to the game's ease of teach, we got there in the end.