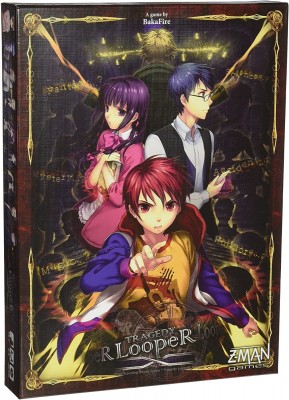 In the spirit of the fantastic Loki series wrapping up, it's only fitting I review this time warping deduction game.

This wasn't suppose to happen.

Someone is messing with the timeline.

We need to call in the time detectives.

You and your friends are these time detectives. At least most of you are. One of you will be playing the mastermind in this 1 v many game of deduction.

As a detective, you wake up, knowing some evil is afoot and messing with the timeline. You need to do some detecting to figure out this mysterious plot. To do this, you will be moving people around different areas, calming them and removing their paranoia, and finally gaining their goodwill so they'll aid you.

But you're on a time limit.

A tragedy will happen, and you will have failed.

Then you wake up.

The loop begins anew and no one but your other detectives remembers what's transpired. Armed with the information from the loop before, it's up to your team to make sure it doesn't happen again.

On the flip side, the mastermind knows exactly what's going on. It's their job to obfuscate the clues and make it as difficult as possible for the detectives to figure out the cause.

For you it's a waiting game. To win you need the detectives to fail again, and again, and again. As after a certain number of loops your changes will corrupt the timeline for good.

However, if they manage to avoid the tragedy one time. Even by luck. Then the timeline is restored, and something happens to you. It isn't explained in the manual. But I imagine it isn't going to be good. 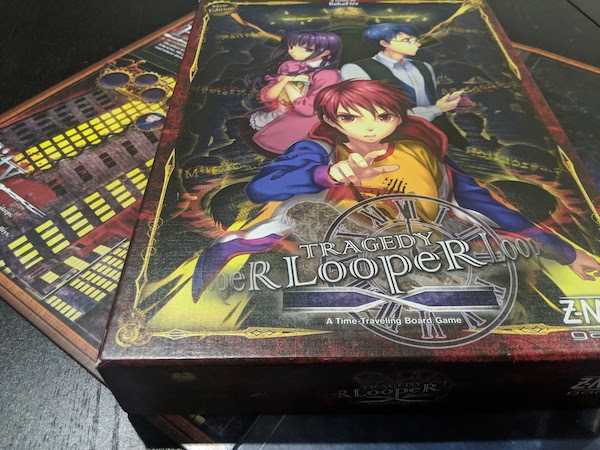 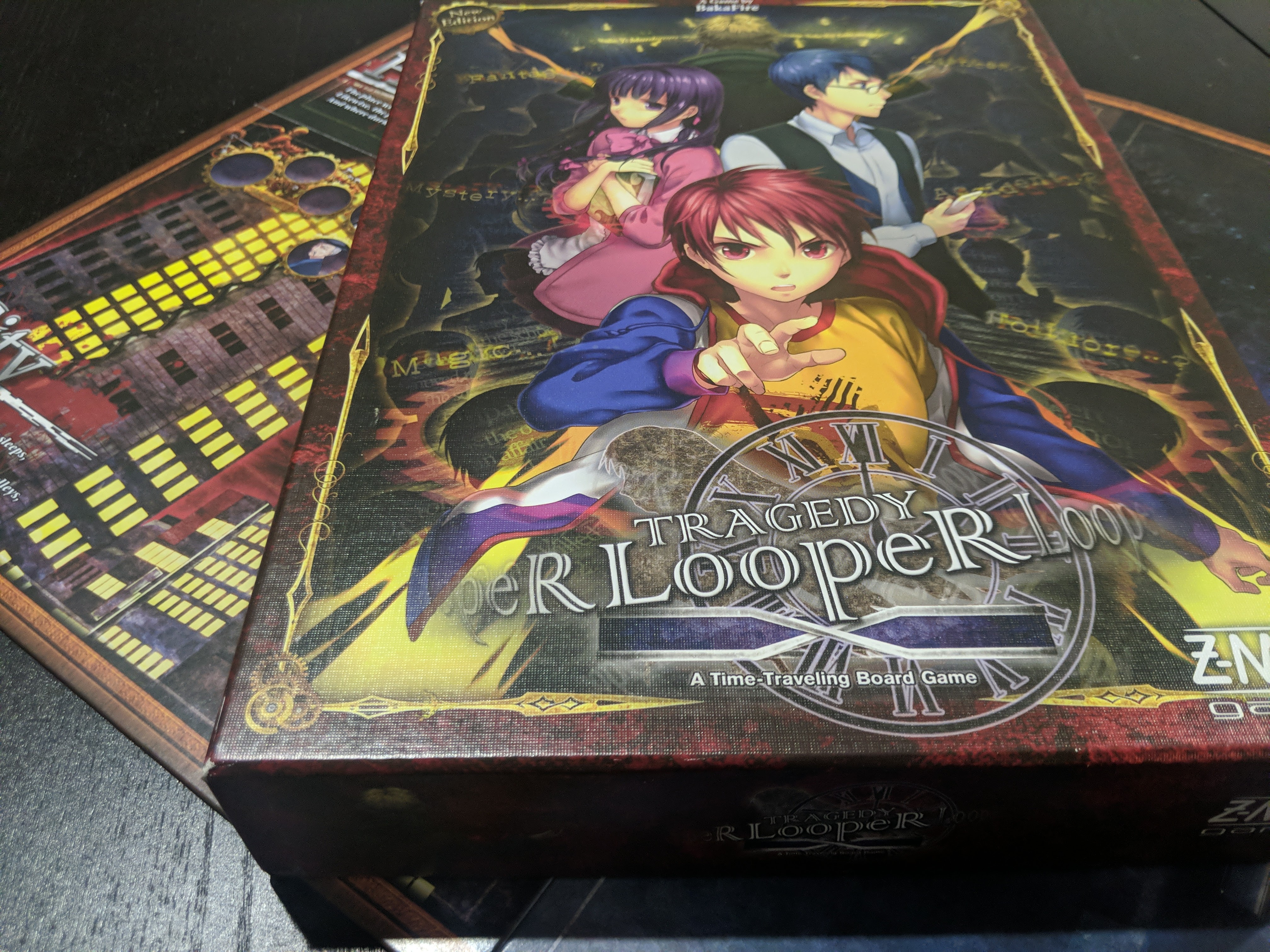 Sounds great, how the hell does it work?

This was a tough game to wrap my head around, and I credit this difficulty to the rule book which could be written a lot better in 2021. Thankfully though, once it clicks everything falls into place, and everything you need to know is on the board.

Speaking of, this board is cordoned into four areas, the Hospital, the Shrine, the City, and staying true to it's anime roots - the School. A number of characters are spawned across these areas, with each having their own role. For instance, the Class Rep might be the Serial Killer; killing anyone who is alone with them at the end of the round.

These roles are only known to the mastermind, and change depending on the scenario being played.

The scenario also provides the mastermind with several ways to win the game. Whether it's the Office Worker needing to die, or the Hospital requiring a number of intrigue tokens. Figuring out how to change the board state to meet these conditions is surprisingly challenging. There are a lot of roles, actions, events, and ending conditions at your disposal, but getting it all straight inside your head will push you to your limit.

Doubly so because if you aren't subtle about how you achieve these conditions the meddling detectives will clue into what they are, and what you're trying to do. Making life harder for you in future loops. 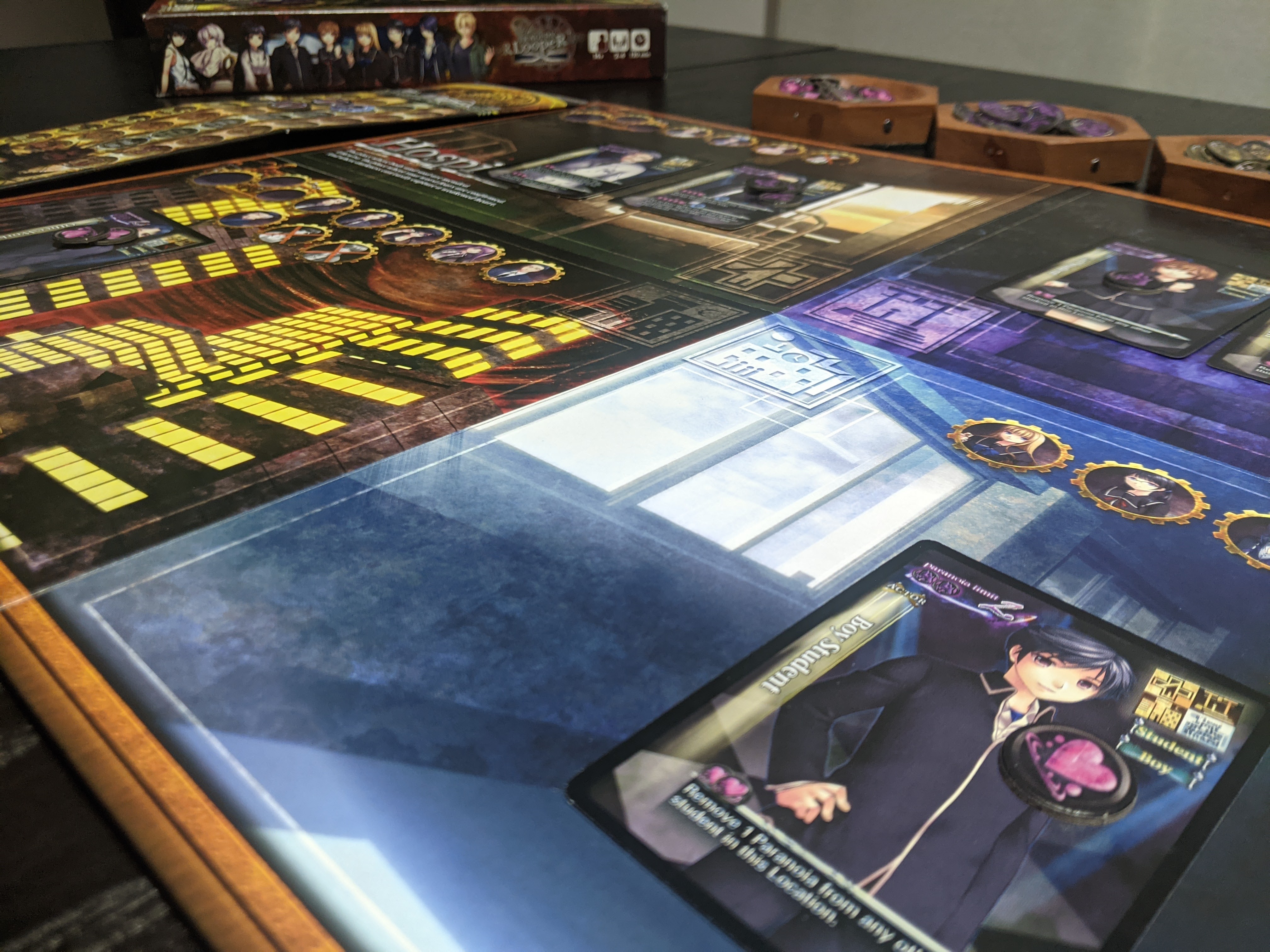 We've been working our way through Tragedy Looper from the outside in. If this was Earth then the next part we need to talk about is the molten core.

Every round, or day, is conducted in two parts.

First, the mastermind places three cards face down on the board, then the detectives get a chance to react. Placing three face down cards as well. Then all cards are revealed and combined before the actions are carried out. An example is if the mastermind plays a card to move vertically on the Class Rep and the detectives play a card to move horizontally. Then upon reveal, the Class Rep will move diagonally in their set direction.

The deduction in this game is amazing, and on par with the best deduction board games I've played. But it's this card play, and bluffing that makes Tragedy Looper exceptional. More so at the 3-4 player count, where the table talk between players takes centre stage.

One of my favourite experiences of the last couple years, is being the mastermind, and sitting quietly while the team discussed what I'd done. One of the detectives had figured out exactly what I was up to and telling the others. I was sweating like a snowman in heat. Fortunately for me, and not for the timeline, he was overruled and they went with another strategy. But for those sweaty seconds, it was incredibly tense and exciting, and a fantastic board gaming experience.

From the other side

Being a detective is very scientific.

You start the game with this table of roles, like those logic puzzles grids in the newspaper. This can be overwhelming at first, as you will have no idea what to do, until the tragedy hits. Then you'll have learnt something.

Next loop you go through you learn something new. This cycling of learning is drip fed to you from both the tragedy occurring and also from what the mastermind is doing. Why did they move them there? Which people had the paranoia tokens on them?

Everything is a clue if you look close enough.

This constant progress engages you to dig deeper and solve the mystery. Even if you lose, you feel like you're always achieving something.

If there's one downside to being a detective, it is the components. As while they're great, they give you a sheet of paper with everything you need to know on it. You can't write on it. This is why the first thing I did with Tragedy Looper was laminate these sheets and get a pack of nice erasable markers.

Otherwise, Tragedy Looper is my favourite deduction board game, and that's against some heavy competition from Cryptid and Letters From Whitechapel. It works at both the turn by turn level of trying to get into the head of the mastermind, but also on that higher level with the slow reveal of information. It's an incredible execution of a very difficult design idea.

Jexik replied the topic: #327105 11 Oct 2021 08:40
This is one of the best games that I may never play again. It was my ex-wife’s favorite game, and we played through all ten scenarios in the base game and 2 more in the first expansion, but I have both expansions. I prefer to play from the protagonist (detective) side, which means someone else in my friend circle has a lot of catching up to do if I’m going to play a new scenario. I liked it better two player, as I felt the game clipped along at a nicer pace without the tabletalk, but I could see some people enjoying it with more.

Multiplayer as Mastermind I found it both very stressful to be dismantled and mildly upsetting when I’d win, because you’re directly making two or three other people lose what feels like a cooperative game. One vs. many isn’t ideal for my mindset.

charlest replied the topic: #327107 11 Oct 2021 09:12
I adored this game when it came out. After several plays, however, it became a bit tedious and felt like too much work for the payout. Wouldn't mind playing it again someday.

Erik Twice replied the topic: #327137 12 Oct 2021 18:53
This is a fantastic game and I'm glad to see it getting the coverage it deserves! It's probably one of the most mentally demanding games in my collection, which is great.
Read More...