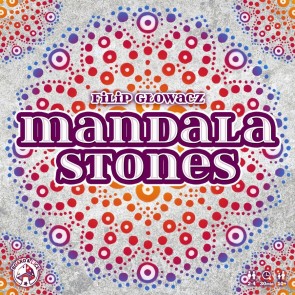 If there’s a style of game guaranteed to get non-gamers interested in a game, it’s the abstracts. Big chunky pieces of wood and plastic clacking together, no complicated rules, and an innate human fascination with playing with things. Mandala Stones is the latest such game from Board&Dice, and it’s a beautiful boxful of pink, yellow, blue and purple discs.

The basics of Mandala Stones are pretty simple. The stones are stacked in random towers on the main board, and four ‘artist’ pieces get stood between them. Every stone has one of two mandala patterns on top, and each of the artist pieces has a mandala on top which matches one or the other. If you choose to pick up stones on your turn, you move the artist piece, then take each adjacent top stone which matches its mandala partner, as long as it’s not adjacent to another artist. 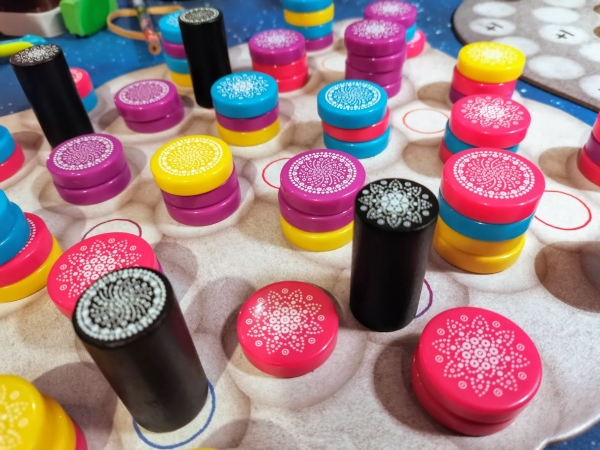 The main board with its stacks of stones. The black artist pieces determine which you can take.

If you were to make some towers of poker chips, and wanted to make a little stack with some of the chips from on top of them, there’s a very natural way of doing it. Like some kind of human claw machine, you pick up the first one in your fingers, then move to the next tower and pick the top chip up beneath the first in your hand. It’s a very natural way of doing it, and the first chip you chose becomes the top of the stack. This is the opposite way you make the stack in Mandala Stones, and it feels wrong, for want of a better word. I can’t believe it got through play-testing without someone picking up on it.

It’s not game-breaking, and there are ways around it. You can just pick them up anti-clockwise and end up with the same result, just make sure everyone is doing the same thing. It’s just worth bringing up because it can feel jarring in a first play.

When you’ve got a pile of stones in your grubby mitt, you’ve got to place it on an empty space on your player board. Once your board has a pretty display of plastic stones, you can choose to score instead of picking up more, and this is where the game gets really interesting. If you choose to score a colour, you take the top stone of each stack that matches that colour. The points you get however, depend on the height of the stack you take them from. One spot on your board rewards a stone resting on it’s own on the board with the most points, while another rewards the third one up, and so on. There’s another that rewards points for the number of differently-sized stacks on your board.

It’s a really interesting way of doing things, because it means at times you’re actively trying to pick up just one or two stones from the main board. It’s a strange game in terms of interactions too, as there’s almost no point in trying to take stones you think someone else wants, as there’s very little chance they’re the ones you want. Mandala stones is a very reactive game, it’s almost impossible to play with a long-term strategy. So much so, that there’s almost no point in looking at the main board until the turn immediately before your own. 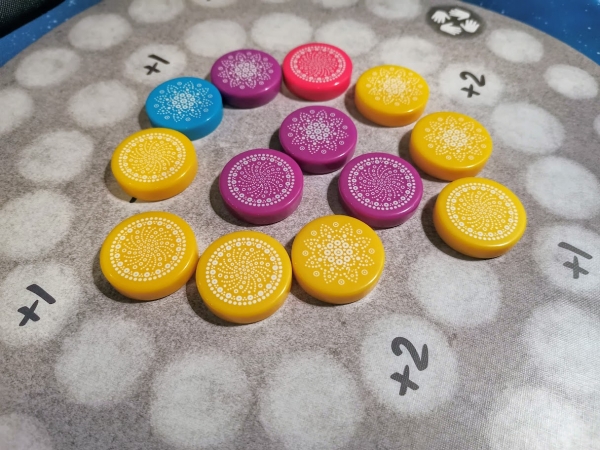 The score track has opportunities for a few bonus points, and also triggers the end of the game.

Granted, you can see the colours of the stones underneath the top-most ones, but you don’t know which mandala pattern will be on it until it’s revealed, and therefore don’t know how many stones you’ll be picking up until that point either. This isn’t a game for someone who likes to work on a grand plan. The skill comes in looking at the stones under the ones you plan to score, and trying to find scoring opportunities with the stones remaining on your board, and it’s a real head-scratcher of a puzzle.

Abstract games are a mixed bag for me. Some of them I’ve kept in my collection for a very long time (Hive), and some seem to battle for the same space on my shelves. I’ve had Azul: Summer Pavilion for ages, and I really enjoy it, but I found myself choosing to play it over Sagrada, so sold that one on. Mandala Stones occupies the same sort of place for me, and it’s left me with a really tricky choice. Do I keep this or Azul? Or both?

Reading the review above, you might think I don’t like Mandala Stones much, but you’d be wrong. Mandala Stones is a clever, fun, and really unique game. I’ve not played anything quite like it. What I wanted to convey is that it’s not a game for grand strategy, and it’s a game that’s very difficult to do any future planning for, because your options are always dictated by the person directly before you. If you like those reactive games though, and thinking on your feet, you’ll really like it.

It really captures that same feel of a game like Azul, the way you’ve got an idea of what you want to do, but are never sure you’ll be able to do it, and it’s how you adapt to the game in front of you that determines if you win or not. It’s a gloriously tactile game, and the stones feel so nice to play with. Colour-blind players may have difficulties telling some of the colours apart, so I’d definitely take that into consideration, as there’s nothing else to tell them apart, unlike the Azul games.

If you like lighter games or abstract games, I think you’ll have great fun with Mandala Stones, and I think it would be an excellent game to get non-gamers to the table with. If I had to choose between this and Azul, I’d be really torn, but I wouldn’t be disappointed if someone asked me to play either. Mandala Stones is a really decent abstract.

Review copy kindly provided by Board&Dice. Thoughts and opinions are my own.