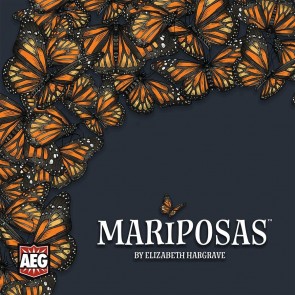 I recently reviewed Wingspan, a game about collecting birds and playing with tons of little eggs. Its designer, Elizabeth Hargrave, was rocketed from “who’s that?” to a name that everyone in board games knows. So what’s in store for her big-box follow-up to the birdy game? More birds? More delightful eggs? Nope. We’re still playing with animals that fly, but this time it’s butterflies.

Mariposa is the Spanish word for butterfly, and Mariposas is a game that recreates the incredible journey that millions of Monarch butterflies make every year. Starting in Mexico in the Spring, generation after generation of the beautiful creatures make the 3,000 mile migration to North America, and back again in the Autumn. It’s one of those bonkers feats of nature that happens constantly, while most of the world is oblivious to it. Mariposas puts you in the place of a family of butterflies, aiming to make that same arduous trip, and to bring the most of your offspring back to warmer climes before winter.

Mariposas combines movement and set-collection to drive the gameplay. Each player starts out with a first generation butterfly, and on each turn plays a card from their hand of two that lets them move one or more butterflies, one of more hexes across the map. When you land on a flower, you collect a matching token. If you land on a hex that neighbours a milkweed icon, you can spend your flower tokens to spawn a new generation butterfly marker, giving you more of the little flappers to move on your turns. 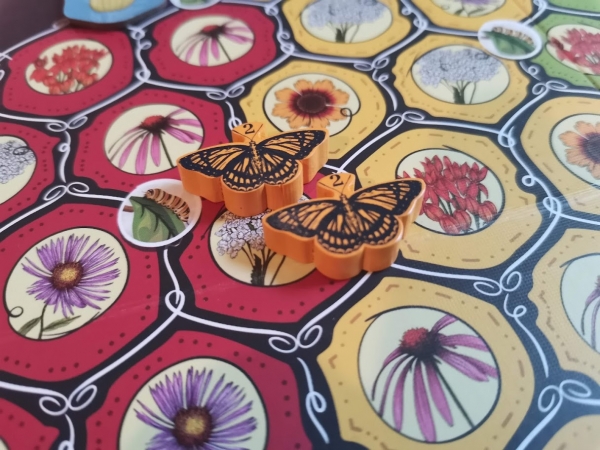 These second generation butterflies are next to the milkweed icon, so could spawn third generation insects

Spread across the map, at various city locations, there are waystation markers. These start face-down, so the first to visit is in for a surprise when it’s flipped. Most waystations let you take a life cycle card. There are four different cards (egg, caterpillar, chrysalis, adult), and sets of each in three different colours. If you manage to collect all four cards of a single colour, you get a bonus – nice!

Each season (round) is one turn longer than the previous, and at the end of each season there’s a randomly chosen interim scoring card. The scoring categories are really diverse, rewarding you for things like being above, below, or to one side of a particular city, or having butterflies around a city, or on certain coloured hexes. Points are really tight in Mariposas, so trying to accomplish these while sticking to your own personal Master Plan is important, but potentially tricky.

Success can be a double-edged sword. Wingspan continues to be a smash hit around the world for Elizabeth, so all eyes were on her for her next big game. She brought us Tussie Mussie too, but it was a smaller release in a smaller box. It was always going to be a tall order to replicate the universal appeal and success of Wingspan, and I’m really glad Mariposas took her design in a very different direction. I imagine it would have been easy to lean on the mechanisms used in Wingspan, and offer variations on a theme. Engine- or tableau-building with hundreds of cards – that sort of thing. Instead, Mariposas uses completely different systems. 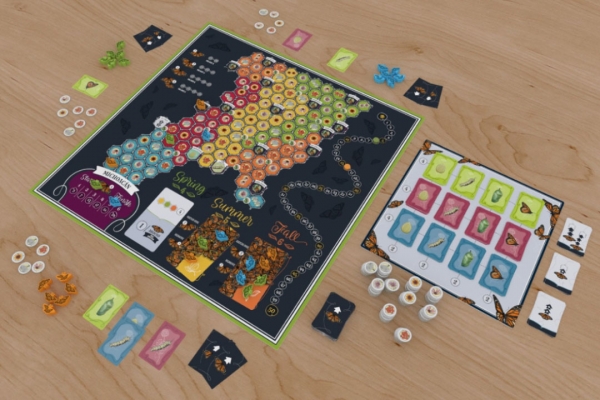 I love the bold colours and dark backgrounds

There’s a proper board, with hexes(!), and the core of the game is based on moving around that board. Cards are involved, but they could just as easily have been a movement dice, with the card icons on different sides. So while I’m really pleased to see more strings to her bow, anyone coming straight from Wingspan expecting a game with a similar feel might be surprised. It’s not an unpleasant surprise by any means, but it’s something to be aware of, especially with the ‘new gamer’ appeal Wingspan has.

The truth is, Mariposas is a good game. A really good game in fact. Empire Strikes Back following A New Hope good? Maybe not quite that good, but it’s no The Matrix Reloaded, that’s for sure.

Excuse the heading, but I just love the German word for butterfly. Mariposas can feel pretty chaotic the first time you play it. Despite all starting from the same place, players paths diverge quickly, and before you know it there are little wooden butterflies all over the map. There’s zero player interaction, but I think the game would have felt wrong with any included. The way this sprawl happens on the board feels really butterflyish (that’s definitely a word). If you’ve ever sat outside and watched a butterfly flit around all over the place, and wondered how on earth it knows where its going – that’s how Mariposas feels to look at.

There’s a really nice thematic feel to the game’s conclusion. Throughout the Spring and Summer rounds, butterflies are all over the map, doing butterfly things. During the final Fall/Autumn round, there are big points available if you can get your butterflies back to the starting space in Mexico. It’s a lovely thing to watch the butterflies – now three generations removed from the same ones that set out on their journeys – all swooping down the board and converging on Michoacán, ahead of winter.

My first game of Mariposas felt like unfettered chaos. I had no direction, no idea what I wanted to do, and the game felt very random. After you finish that initial learning game, and start to get a grip on what you’re trying to do, a really nice game emerges from the chaotic chrysalis. The season goal cards can have a huge influence on how you play the game, as the scoring requirements can steer you to very specific areas on the board.

There’s also plenty of choice though, as you don’t have to chase those seasonal objectives. If you want to, you can try to collect all the sets of life cycle cards instead. That leads to a really reactive game, especially when the token for a card you particularly want gets flipped on the opposite side of the board to your lepidopteran machinations. However you decide to play, the main thing to know is that you’ll have fun.

Mariposas is another game with appeal to people who might not ordinarily engage with board games. The turns are really easy – play a card, move a butterfly, maybe make another butterfly – but there’s a good depth of strategy there too. If you’re looking for interaction, you’ll want to look elsewhere. Mariposas is the epitome of multiplayer solitaire. There’s not even claiming of highest bonuses for the first to complete something. For families and more casual players though, this is a massive pro, not a con. It’s a beautiful game with high quality components, simple rules, and it plays out pretty quickly. I really like it, and I think you will too.

Review copy kindly provided by Alderac Entertainment Group. Thoughts and opinions are my own.